Outgoing French ambassador Gerard Araud tore into President Trump in a series of exit interviews, calling the U.S. president a “big mouth” who reads “basically nothing or nearly nothing” -- and even comparing him to the "uninformed" French King Louis XIV.

Araud, in an interview with Foreign Policy, drew a stark contrast between the presidencies of Barack Obama and the current White House occupant.

“On one side, you had this ultimate bureaucrat, an introvert, basically a bit aloof, a restrained president. A bit arrogant also but basically somebody who every night was going to bed with 60-page briefings and the next day they were sent back annotated by the president,” he said, referring to Obama.

“And suddenly you have this president who is an extrovert, really a big mouth, who reads basically nothing or nearly nothing, with the interagency process totally broken and decisions taken from the hip basically.”

He told the magazine that often decisions or statements come from the White House, and even administration officials are surprised by them or don’t know what they mean.

In particular, he cited the Dec. 19 announcement of a U.S. withdrawal from Syria as well as the recent decision to recognize Israeli sovereignty over the Golan Heights -- where he said “what I understand was the secretary of state [Mike Pompeo] was not informed.”

The claim is in contrast to Pompeo's own remarks, who said in an interview shortly after the announcement that he was "really proud to be a part of the process that led to the President’s decision this week to recognize the facts on the ground there and to recognize that this was necessary in order to preserve Israel’s security." A day before Trump made the announcement, Pompeo said in Israel that "it’s time that the international community recognize Israel’s stay in the Golan."

Still, his advice to the Elysee Palace for dealing with Trump when he went on the attack against President Emmanuel Macron was that officials do nothing

"He once criticized the French president [Emmanuel Macron], and people called me from Paris to say, 'What should we do?' My answer was clear: 'Nothing.' Do nothing because he will always outbid you. Because he can’t accept appearing to lose. You have restraint on your side, and he has no restraint on his side, so you lose. It is escalation dominance.”

In another interview with The Guardian, Araud compared Trump to the French King Louis XIV, who reigned in France in the 17th and 18th centuries.

“It’s like [trying] to analyse the court of Louis XIV,” Araud said. “You have an old king, a bit whimsical, unpredictable, uninformed, but he wants to be the one deciding.”

Araud’s anti-Trump views are well known. On Election Night 2016, he tweeted, “A world is collapsing before our eyes. Vertigo,” before deleting it. 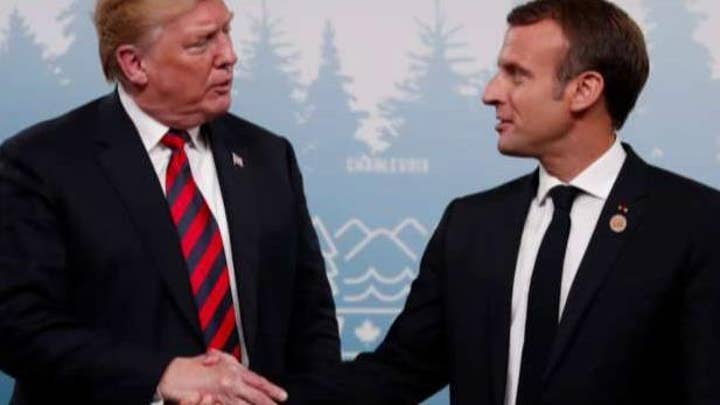 That bleak view of the post-2016 world continued in his interview with Foreign Policy where he struggled to find optimism about a Trump re-election, or the prospects for Britain’s departure from the European Union.

“I don’t know if it will be a disaster,” he said, asked about his thoughts on a Trump 2020 win. “I’m sure it won’t be a good thing. But at the same time it’s too easy to say Trump is responsible. Because on the European side, the crisis is on both sides of the Atlantic. You see the incredible soap opera [over Brexit] offered up by the British. Whatever the result, it’s a lose-lose situation for Europe. It’s a disaster that we are losing the British, all the capabilities they are bringing to us.”

Asked about his election night tweet by The Guardian, he said that in retrospect, he believed the tweet to be right.

“My world, our world of certainties, really was collapsing and we were facing a real, substantial, dangerous crisis, which could basically really overwhelm my own country,” he said. “I believe we are entering a new era. I just don’t know what this era will be.”