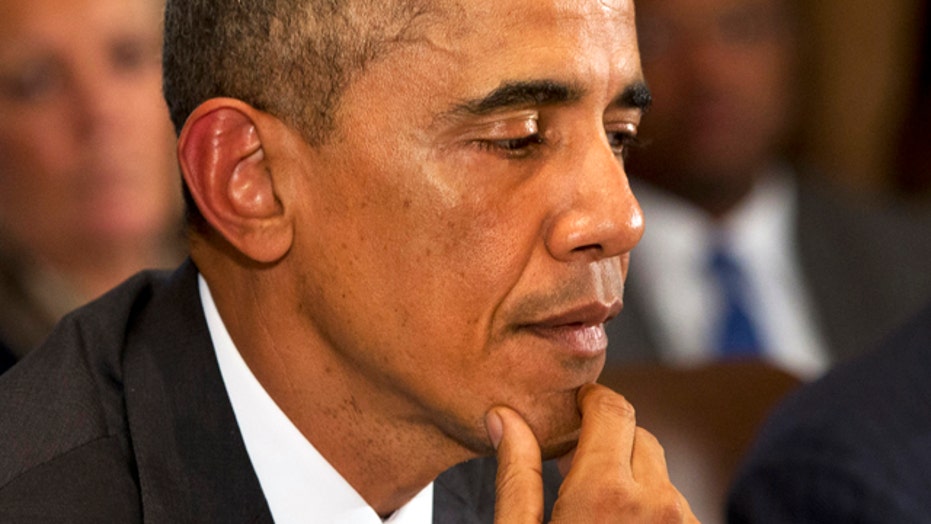 Majority of voters say Obama should have taken action sooner

With ISIS now moving on Baghdad, majorities of U.S. voters think President Obama “waited too long to take action” against the extremists, and disapprove of the way he’s dealing with the group, according to the latest Fox News national poll.

By a 57-34 percent margin, voters say Obama “waited too long” to take action against ISIS.

That’s almost identical to the negative rating the president receives for his handling of the Islamic extremist group: 57 percent disapprove vs. 33 percent approve.

A majority of Democrats approve of Obama on ISIS (56 percent), while larger majorities of independents (65 percent) and Republicans (81 percent) disapprove.

Nearly four in 10 Democrats think Obama waited too long to act on ISIS (39 percent), and a large 80-percent majority of Republicans and 58 percent of independents agree.

The new poll, released Wednesday, also finds that widespread support continues for the military action being taken. Seventy-four percent approve of U.S. airstrikes against the militants. That’s down just a touch from 78 percent approval two weeks ago (Sept. 28-30). Approval slipped among Democrats (-5 points) and Republicans (-4 points). It went up just slightly among independents (+2 points).

Views are mixed on sending combat troops to fight ISIS: 43 percent of voters think the president is making a mistake by ruling out the use of ground troops, while 46 percent agree with Obama’s decision.

ISIS or Ebola? Which poses a greater threat to Americans? Fifty percent say ISIS, while 27 percent think it is Ebola. Another 18 percent say it’s the same. Both Democrats (+16 points) and Republicans (+35 points) are more likely to believe ISIS poses a bigger risk.

By nearly two-to-one, voters think the federal government is hiding information about the militant group from the public that it should disclose (60-34 percent).

That’s far more than the 46 percent who believe information is being withheld about the Ebola virus.

The Fox News poll is based on landline and cell phone interviews with 1,012 randomly chosen registered voters nationwide and was conducted under the joint direction of Anderson Robbins Research (D) and Shaw & Company Research (R) from October 12-14, 2014. The full poll has a margin of sampling error of plus or minus three percentage points.