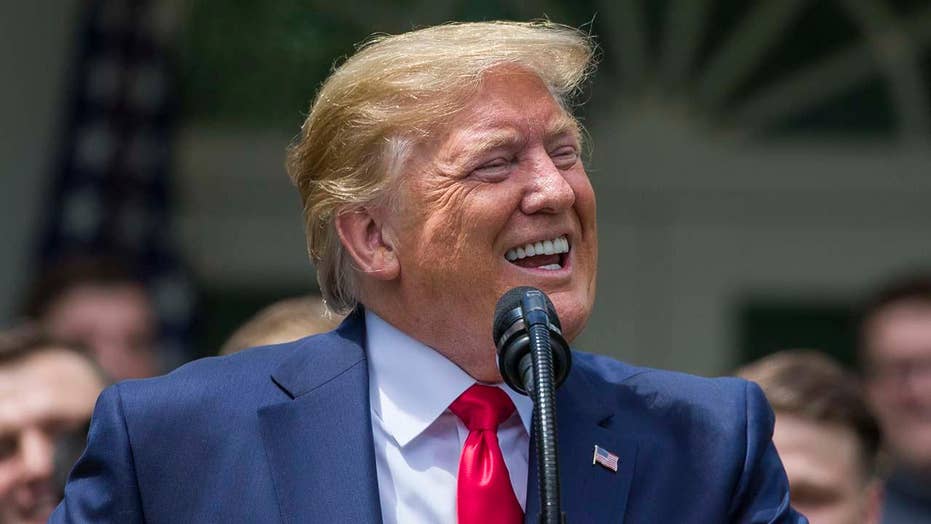 Nearly half of voters rate the economy positively -- and they credit Donald Trump.

Seventy-six percent of Republicans view the economy positively compared to just 28 percent of Democrats and 30 percent of independents.

In December 2016, the month before President Trump’s inauguration, just 33 percent of voters rated the economy positively.

The poll also asks voters to name, without the aid of a list, who is most responsible for the current economy, and President Trump and Republicans come out on top with 38 percent -- far more than the next highest mention of former President Obama and Democrats at 13 percent.

The economy remains the only issue where Trump receives positive marks, as 48 percent of voters approve and 46 percent disapprove, and more think his policies are helping (40 percent) than hurting the economy (38 percent).

Yet it is the reverse on the personal level, with more saying the president’s policies are hurting (37 percent) than helping them (32 percent).  Another 27 percent say Trump’s policies haven’t made a difference either way to their household.

By an 11-point margin, voters think increased tariffs on Chinese imports will do more to hurt the economy than help it.  That may be a reason why, when asked who would do a better job as president protecting America’s interests with China, more say former vice president and Democratic presidential frontrunner Joe Biden (42 percent) than Trump (38 percent).

Obamacare is more popular -- 50 percent feel it has been good for the country, 37 percent bad.

By a 9-point margin, more want to repeal at least parts of Obamacare than keep or expand the law.  For the GOP tax law, voters prefer repeal by 16 points.

-- By a 4-point margin, voters say Trump not releasing his taxes bothers them (50-46 percent).  That’s a reversal from 2016 when a majority thought it was “no big deal” (46-53 percent).  But seeing Trump’s tax returns is irrelevant to many -- a 55 percent majority says there is “no chance at all” something in his business dealings or taxes could change how they feel about him.

-- Voters still give Congress a thumbs-down, as 21 percent approve and 66 percent disapprove.