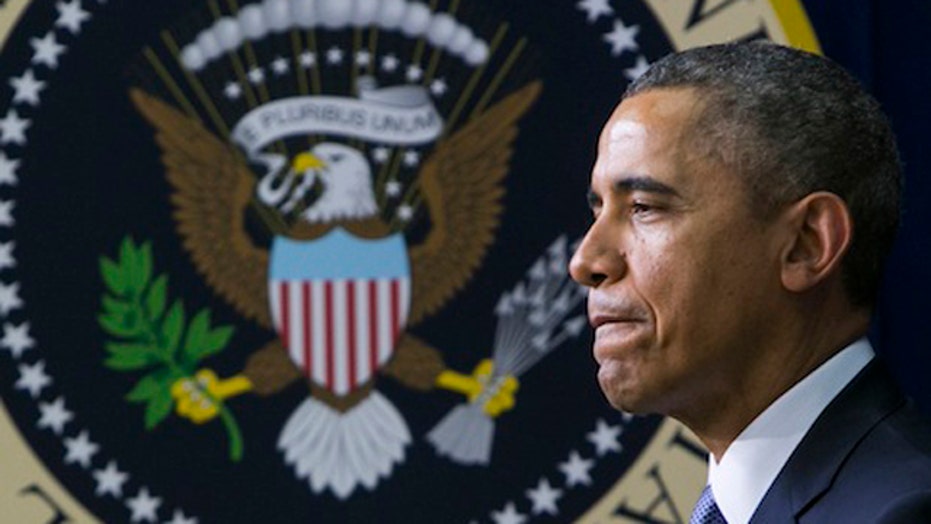 Americans have some big worries about the battle against Islamic extremists -- and how the administration is waging it.

According to a Fox News national poll, American voters think:

- The threat from Islamic extremists is increasing, yet President Obama isn’t prepared to do “whatever it takes” to defeat them.

- The president overstepped his authority by transferring terrorist suspects out of the detention center at Guantanamo Bay.

- America’s political, business, and media leaders could react to the recent attacks on Sony Entertainment and Charlie Hebdo in ways that limit freedom of speech.

Click to view the full results of the poll (pdf)

Here are the details of the poll, released Wednesday:

A decisive 64-percent majority of voters thinks the threat from Islamic extremists is increasing and another 29 percent says it is holding steady.  Just 4 percent say the threat is decreasing.

At the same time, a 55-38 percent majority says Obama is not prepared to do “whatever it takes to defeat Islamic extremists.”  That’s mostly unchanged since September, when the margin was 54-39 percent.

Among the issues where ratings of Obama’s performance were tested, he receives some of his lowest job ratings on the response to ISIS.  Currently 33 percent of voters approve of the job he’s doing, while 56 percent disapprove.  More than one in four Democrats (29 percent) joins in the disapproval.

He does a bit better for his handling of terrorism: 39 percent approve, while 53 percent disapprove.

On the broad question of whether the Obama administration has made the country safer, 43 percent of voters think it has “mostly succeeded.”  Yet that’s down 12 points from the 55 percent who felt that way in June 2012.

Meantime, 54 percent say Obama is exceeding his authority as president when he transfers suspected terrorists out of the detention center at Guantanamo Bay.  Just 37 percent say he is acting within his authority.

A Fox News poll taken in December found a majority wants any ISIS terrorists captured on the battlefield to be taken to Gitmo (59 percent) rather than a U.S. federal prison (29 percent).

It isn’t just the president’s response to the attacks that concern voters.  Overall, nearly seven in 10 (69 percent) are at least somewhat concerned American leaders -- political, business and media -- will respond to the recent attacks on media companies such as Sony Entertainment and the Paris newspaper Charlie Hebdo in a way that limits self-expression in the United States.  Just 27 percent aren’t worried.  More Republicans (77 percent) than Democrats (63 percent) are worried.

The Fox News poll is based on landline and cell phone interviews with 1,018 randomly chosen registered voters nationwide and was conducted under the joint direction of Anderson Robbins Research (D) and Shaw & Company Research (R) from January 11-13, 2015. The full poll has a margin of sampling error of plus or minus three percentage points.