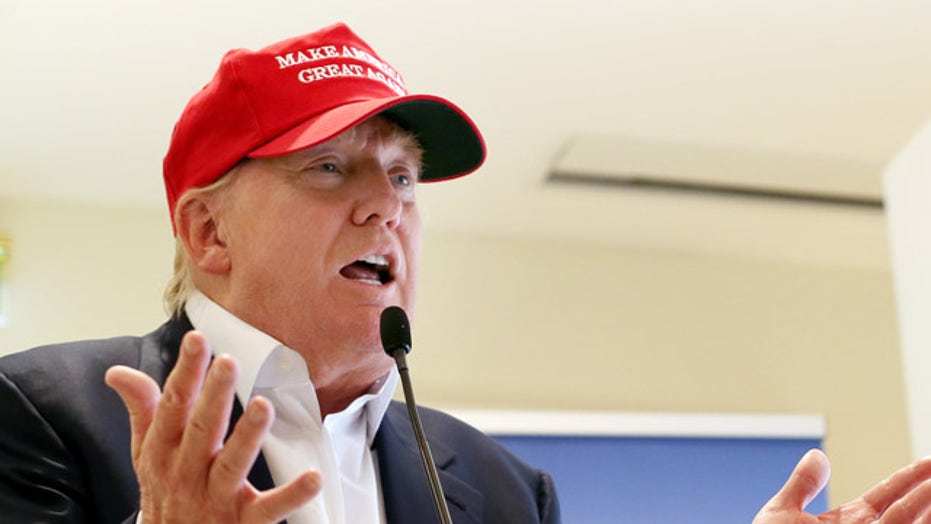 Businessman Donald Trump continues to gain ground in the race for the Republican nomination. What’s more, the number of GOP primary voters saying they would at least consider backing Trump has more than doubled in the last two months.  Meanwhile, support for Democratic frontrunner former Secretary of State Hillary Clinton remains high, despite sliding to its lowest yet.

These are some of the findings from the latest Fox News national poll on the 2016 presidential race.

Trump receives the backing of 26 percent of self-identified Republican primary voters -- up from 18 percent in mid-July and 11 percent a month ago. That’s not only the highest level of support for Trump, but it’s also the highest any GOP candidate has received since the Fox poll began asking the question in December 2013.

Trump’s rise hasn’t hurt former Florida Gov. Jeb Bush, who garners 15 percent and is the only other Republican in double-digits.  He was at 14 percent in mid-July and 15 percent in June.

Two Republicans threw their hat in the ring in the last two weeks.  Kasich formally announced July 21 and his support went from two percent in mid-July to three percent in the new poll.  Gilmore made his candidacy official July 30.

Men (29 percent) are a bit more likely than women (24 percent) to back Trump -- yet he’s the top vote-getter for both.

Another example of GOP primary voters increasingly liking what they hear from Trump:  34 percent say they would “definitely” vote for him, which is more than four times what it was two months ago (8 percent).

And the number who would “never” support Trump dropped 26 percentage points: it was 59 percent in June and 33 percent now.  Graham (40 percent), Christie (34 percent) and Pataki (34 percent) now have more voters than the Donald saying they would never vote for them.

Only nine percent would “never” vote for Walker.  That gives him the best rating among GOP candidates on that measure, although he’s also one of the least well-known candidates: 47 percent say they “want more information” about him before deciding their vote.

Winning isn’t everything -- or at least electability isn’t foremost in the minds of GOP primary voters right now. When asked what they want in their party’s nominee, they say being a strong leader (29 percent) matters more than having true conservative values (20 percent), beating the Democrat (13 percent), having the right experience (13 percent) and shaking things up in Washington (13 percent).

Those who prioritize strong leadership are most likely to back Trump (29 percent), Bush (19 percent), Walker (10 percent), Rubio (7 percent), Kasich (5 percent) and Paul (5 percent).

What if Trump were out of the picture? Republican primary voters were also asked about their second choice candidate, which allows a look at the state of the race if a current candidate were to drop out. Here’s how things stand without Trump: Bush gets 20 percent, followed by Walker at 13 percent, Carson and Cruz at 9 percent, Huckabee at 8 percent, Paul, Rubio and Christie tie at 6 percent, Kasich at 4 percent, and Perry, Fiorina and Santorum get 2 percent each.

Switching to the Democratic side, Clinton is still the favorite among self-identified Democratic primary voters.  She receives 51 percent while Vermont Sen. Bernie Sanders comes in at 22 percent.  Yet that is Clinton’s worst showing -- and Sanders’ best.  Support for Clinton was 59 percent two weeks ago, 61 percent a month ago -- and has been as high as 63 percent in the months since Sanders entered the race.  Vice President Joe Biden, who is said to be considering a run, sits at 13 percent support.

By an 18-point margin, Republican primary voters (74 percent) are more likely than their Democratic counterparts (56 percent) to be extremely or very interested in the 2016 election.

The economy is the top concern for both Democrats and Republicans.  Health care comes in second for Democrats, while for Republicans it is terrorism.

Eighty-two percent of Democrats approve of Obama’s performance, while 85 percent of Republicans disapprove.  Among independents, it is 37 percent approve and 49 percent disapprove.

The Fox News poll is based on landline and cell phone interviews with 1,306 randomly chosen registered voters nationwide and was conducted under the joint direction of Anderson Robbins Research (D) and Shaw & Company Research (R) from July 30-August 2, 2015. The poll has a margin of sampling error of plus or minus three percentage points for all registered voters, and four points for both Democratic and Republican primary voters.