Greater party loyalty plus higher interest in the election among Democrats combined with more enthusiasm among Jones supporters gives him the advantage in the race to fill the U.S. Senate seat previously held by U.S. Attorney General Jeff Sessions.

That’s according to a Fox News Poll of Alabama voters conducted Thursday through Sunday using traditional polling techniques, including a list-based probability sample with both landlines and cellphones.

Jones receives 50 percent to Moore’s 40 percent, with 1-in-10 undecided (8 percent) or supporting another candidate (2 percent) -- which could make a difference Tuesday. That’s even truer with such an unconventional election with unconventional candidates.

This race’s uniqueness is significant. It is impossible to know who will show up to vote in a special election to fill a seat in the middle of a term in an off-year. And it’s December, a time when people expect to be going to the shopping mall, not the voting booth. 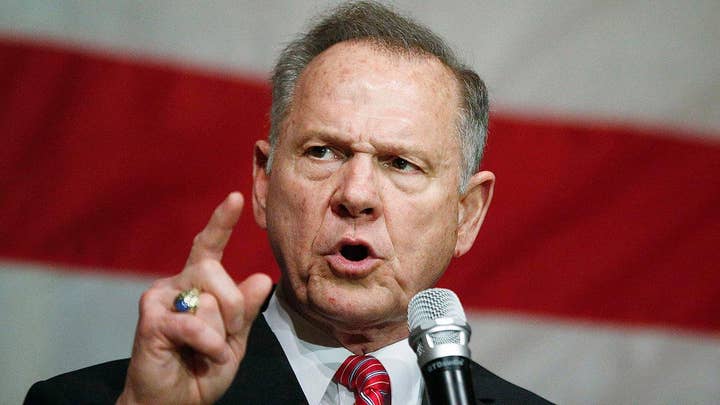 On top of that, accusations of sexual misconduct against Moore emerged Nov. 9. That’s just a month before the Dec. 12 election.  Since then, he has repeatedly denied the allegations, and after the GOP initially pulled its support, the party ultimately backed Moore.

By a 6-point margin, Alabama voters believe the allegations against Moore are true (39-33 percent).  They were more evenly divided last month, believing the accusations by just 1 point (38-37 percent). About one quarter, 27 percent, feel it is too soon to say or have no opinion.

Among Republicans, 13 percent believe the accusations are true, 60 percent say they aren’t, and 26 percent are unsure. In November, it was 13-62 percent (26 percent unsure).

President Donald Trump, who won the state by 28 points in 2016, held off endorsing Moore until Dec. 4 -- about a week before Election Day. Yet Alabama’s senior senator, Republican Richard Shelby, announced Sunday he didn’t vote for Moore and instead cast a write-in vote.

Jones’s 10-point edge is outside the poll’s 3 percentage-point margin of sampling error. Last month, Jones was ahead by 8 points among likely voters and by 9 among the larger group of registered voters (November 13-15, 2017). In the new poll he’s up by 6 among registered voters.

Among just the 46 percent of Alabama voters who are “extremely” interested in the race, the Democrat’s lead widens to 53-40 percent.

The small subgroup of independents breaks for Jones by 29 points.

Support for Moore among white evangelical Christians is down 8 points since last month: it was 73 percent in November and stands at 65 percent now.

And his advantage among men has dropped from 12 points last month to just 3 points now. In addition, Republican men (41 percent) are less likely than GOP women (50 percent) or Democratic men (53 percent) to be “extremely” interested in the race.

“Moore might prevail if only the people who typically vote in Alabama elections turn out Tuesday, which is often what happens in special elections,” says Democratic pollster Chris Anderson, who conducts the Fox News Poll with Republican counterpart Daron Shaw.

“But this appears to be a special, special election with blacks and young voters animated by a caustic Republican candidate and the chance of winning a statewide election with national implications, and at the same time some Republicans and many moderates are turned off by Moore, too.”

A subtle but potentially noteworthy finding is Alabama voters who were interviewed on cellphones are +30 for Jones, while the race is roughly even among all others. The fact that traditional, high-quality probability samples, like the Fox News Poll, include both landline and cellphone numbers may be why these polls show Jones doing relatively well compared to automated or blended polls.

“It’s clear Jones is positioned to pull off the upset because his supporters are unified and energized, and Moore’s are conflicted and diffident,” says Shaw.

“But Jones is depending on many voters who show up only occasionally to cast their ballots.  If their rate of follow-through drops from what we expect, the race could turn.  The other factor is the race seems volatile, with a new twist or story every day, and because of this it is difficult to know what Republicans will ultimately do.”

The poll does indeed show enthusiasm is up among Jones supporters and held steady among Moore backers.

Fifty-seven percent of those planning to vote for Moore say they “strongly” support him, which is mostly unchanged from 58 percent in November.

Among Jones supporters, 70 percent “strongly” back him, up from 62 percent.

The portion of Moore supporters who are backing him because they dislike Jones is up 4 points since last month and stands at 13 percent.

By a 15-point margin, strong moral character is more important to Alabama voters than how the candidate will vote in the Senate (48-33 percent).

For those who say moral character is more important, Jones tops Moore by 60-30 percent.  Moore is preferred among those prioritizing how the candidate will vote in the senate by a narrower 54-38 percent.

The Fox News Poll is conducted under the joint direction of Anderson Robbins Research (D) and Shaw & Company Research (R).  The poll was conducted December 7-10, 2017, by telephone (landline and cellphone) with live interviewers among a sample of 1,127 voters selected from a statewide voter file in Alabama.  It has a margin of sampling error of plus or minus three percentage points for the full sample of likely voters.  For the sample of 1,408 registered voters it is plus or minus 2.5 percentage points.