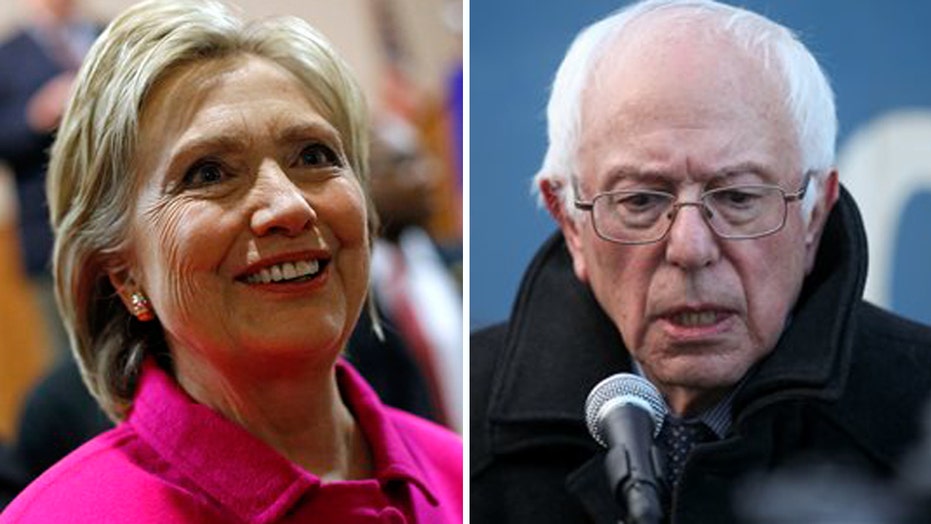 Clinton goes on the attack as Sanders continues to surge

Hillary Clinton’s lead in the Democratic primary race has narrowed to its slimmest margin yet.

The front-runner’s support has slipped under 50 percent, and cracks may be appearing in what some called her “firewall” -- the African-American voter bloc.

Here are the numbers from the latest Fox News national poll:

Ten percent are undecided -- a sign the race is more fluid than it seemed two weeks ago when only two percent were undecided.

Last June, Clinton held a 46-point lead over Sanders.  Since then, Sanders’s support has grown slowly but steadily, while Clinton’s support has ebbed and recovered once -- and now appears in danger of another reversal.

Clinton’s sagging support is due, at least in part, to erosion among black voters.  While 67 percent support her, that’s down from 78 percent two weeks ago and 84 percent in December.

“This comes against a backdrop of extreme volatility in stock markets and increasing pessimism about the economy,” says Dana Blanton, vice president of public opinion research for Fox News. “For the first time in over three years, more Americans think the economy is getting worse than better.”

A year ago, 53 percent thought the economy was getting better and 36 percent said worse.  Now 46 percent think it’s getting worse and 39 percent better.

Sanders says as president he will, “Break up the big banks, close the tax loopholes, and make them pay their fair share.”  He has criticized Clinton for being too close to Wall Street and in the last Democratic debate said the first difference between them is, “I don’t take money from big banks. I don’t get personal speaking fees from Goldman Sachs.”

Sanders voters tend to be dissatisfied (69 percent) with the workings of the federal government, while Clinton voters are about as likely to be satisfied (50 percent) as dissatisfied (47 percent).

About one-quarter (27 percent) of Sanders voters will be pleased if Clinton gets the nomination, while one-fifth (19 percent) would be so dissatisfied they’d stay home in November instead of voting for her.

One thing Sanders and Clinton supporters have in common is that they’d rather Joe Biden be the nominee than their candidate’s current opponent.  Half (51 percent) of Clinton supporters and 39 percent of Sanders voters would be satisfied with the vice president as the Democratic nominee.

Honesty (30 percent) is the top quality Democratic primary voters want in their nominee, followed by the right experience (22 percent), caring about people like themselves (17 percent) and the ability to win in November (8 percent).

Among those who say honesty is most important, Sanders leads Clinton by 27 points.

Both Sanders (84 percent) and Clinton (93 percent) supporters overwhelmingly approve of the job Barack Obama is doing as president.  For comparison, 92 percent of Republican front-runner Donald Trump’s supporters disapprove of Obama.

The Fox News poll is based on landline and cellphone interviews with 1,009 randomly chosen registered voters nationwide and was conducted under the joint direction of Anderson Robbins Research (D) and Shaw & Company Research (R) from January 18-21, 2016.  The poll has a margin of sampling error of plus or minus three percentage points for all registered voters, and 5 points for the Democratic primary voter sample (375).