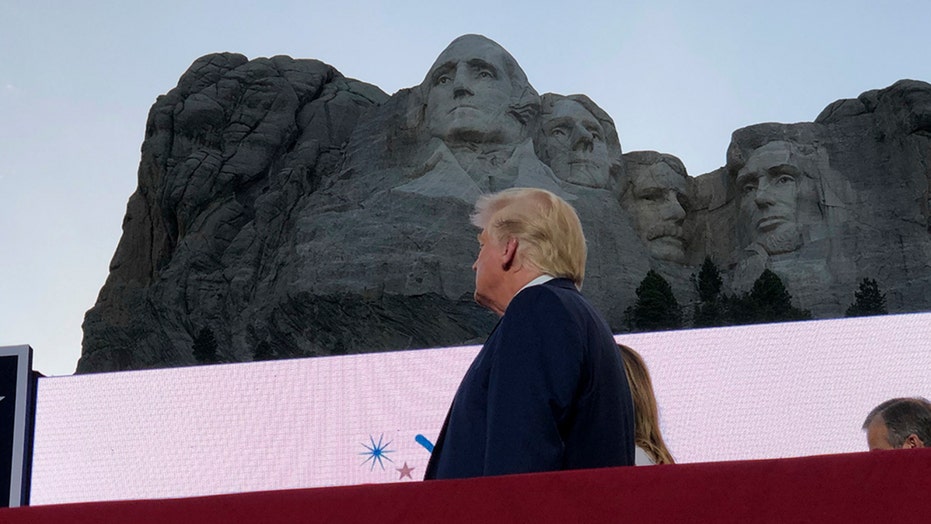 President Trump said in his July 4 Mount Rushmore speech that American children are being taught that the people who built our country were not heroes, but were instead villains.

The latest Fox News survey asks voters how they view the country’s Founders. Sixty-three percent see them as heroes, while 15 percent say villains. Another 15 percent say it depends and 7 percent gave no opinion.

White voters (71 percent) are more than twice as likely as Black voters (31 percent) to consider the Founders heroes.

Overall, voters want to hold on to historical memorials.

By a 57-point margin, they think monuments and statues of George Washington and Thomas Jefferson should stay up (73 percent) rather than be taken down (16 percent).

The poll also finds that large majorities see police brutality against Black Americans (76 percent) and a lack of law and order (79 percent) as very or somewhat serious problems.

On a lack of law and order, Blacks (81 percent) and Whites (80 percent) are equally likely to call it serious.

When asked about the recent backlash against the police, just over half, 51 percent, say it has gone too far, while 12 percent say not far enough, and 29 percent think it has been justified.

Ten percent of voters say race relations is the most important issue facing the country today, placing it third only behind coronavirus (29 percent) and the economy (15 percent).

A 56 percent majority disapproves of the job Trump is doing on race relations. That’s an improvement from last month when a high of 61 percent disapproved. Some 35 percent of voters approve of Trump’s handling of the race issue.

Seventy-eight percent of Blacks, 68 percent of Hispanics, and 50 percent of Whites disapprove of Trump on race issues.

The poll also finds, for the first time, voters narrowly saying it is okay to kneel during the national anthem as a form of protest. Forty-eight percent think it is appropriate, while 44 percent say inappropriate. It was 44-52 percent in October 2017, when the question was last asked.

Current views represent a significant shift since 2016, when Colin Kaepernick first started kneeling. At that time, voters considered it inappropriate by about a 2-to-1 margin (32 percent appropriate vs. 61 percent inappropriate).

Conducted July 12-15, 2020, under the joint direction of Beacon Research (D) and Shaw & Company (R), this Fox News Poll includes interviews with 1,104 randomly chosen registered voters nationwide who spoke with live interviewers on both landlines and cellphones.  The poll has a margin of sampling error of plus or minus 3 percentage points for all registered voters.