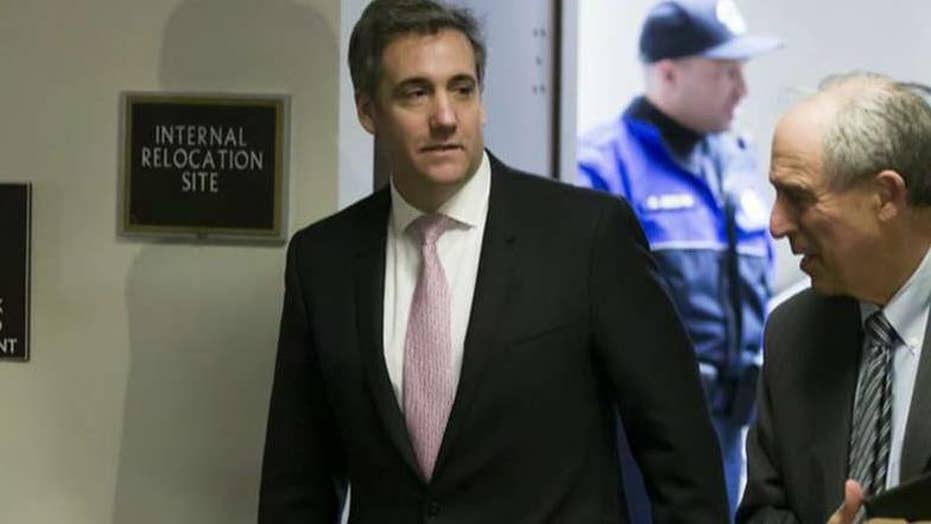 What can we expect from Michael Cohen's testimony on Capitol Hill?

Michael Cohen has been disbarred in New York, with a court ruling that President Trump’s former lawyer’s guilty plea in Robert Mueller’s investigation automatically stripped him of his eligibility to practice law.

The court’s decision Tuesday came while Cohen was on Capitol Hill, testifying behind closed doors before the House Intelligence Committee. He testified in an open House Oversight Committee hearing on Wednesday.

"As of yesterday, I am no longer a lawyer," Cohen said before the House Oversight Committee Wednesday. "I have lost my law license."

Cohen, in November, pleaded guilty to lying to Congress about a Trump real estate project in Russia as part of Mueller’s investigation into Russian meddling and potential collusion with Trump campaign associates.

The guilty plea was related directly to his August 2017 testimony before the Senate Intelligence Committee about a plan to build a Trump Tower in Moscow, giving lawmakers a “false” description of the Moscow Project. Cohen also testified, at the time, that all communications with Russia regarding the project ended in January 2016, prior to the Iowa Caucuses—the first contest in the presidential race—but later admitted communications continued through June 2016 when Trump became the Republican nominee.

Cohen is slated to report to prison in May to serve three years time.

Trump slammed Cohen on Tuesday, saying he was “lying” as part of the investigation to reduce his allotted prison time.

“Michael Cohen was one of many lawyers who represented me (unfortunately). He had other clients also. He was just disbarred by the State Supreme Court for lying & fraud. He did bad things unrelated to Trump. He is lying in order to reduce his prison time. Using Crooked’s lawyer!” Trump tweeted, noting that Cohen was represented by longtime Clinton ally Lanny Davis.

Cohen has been under criminal investigation as part of a grand jury probe into his personal business dealings, including his tax business and bank fraud, since April, when the FBI raided his home, office, and hotel room to seize a collection of documents as part of the U.S. Attorney’s Office for the Southern District of New York’s criminal probe.

In August, Cohen pleaded guilty to five counts of tax evasion, one count of making false statements to a financial institution, one count of willfully causing an unlawful corporate contribution, and one count of making an excessive campaign contribution. The excessive campaign contribution was regarding the $130,000 payment made to Stormy Daniels, whose real name is Stephanie Clifford, in the weeks leading up to the 2016 presidential election in exchange for her silence about an alleged one-time sexual encounter with Trump.

Trump denied in April that he knew anything about Cohen’s payments to Daniels, though the explanations from the president and his attorney Rudy Giuliani have shifted several times.