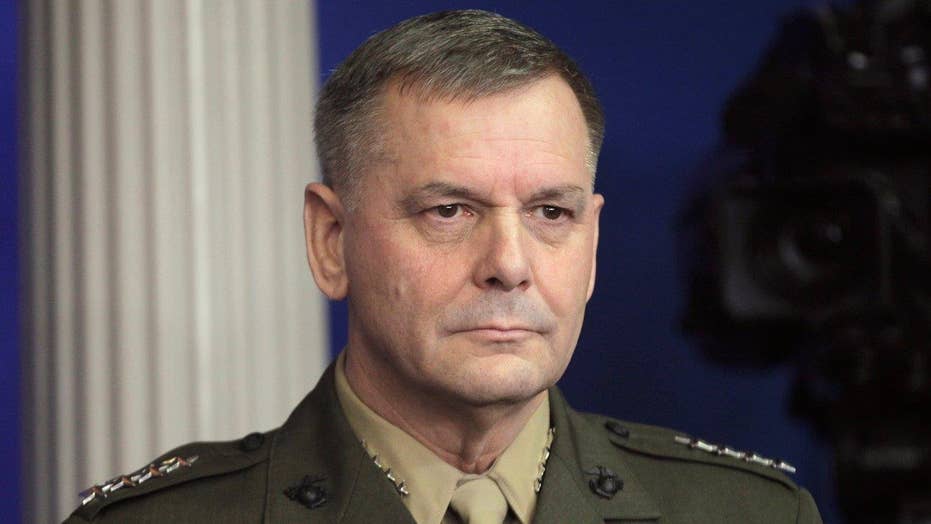 A former vice chairman of the Joint Chiefs of Staff has pleaded guilty to making false statements during an investigation into a leak of classified information about a covert cyberattack on Iran's nuclear facilities.

Retired Marine Gen. James Cartwright entered the plea at a hearing Monday before U.S. District Judge Richard Leon. When Leon asked if Cartwright understood the charge, he said, "I do, sir."

The offense carries a maximum of five years in prison, but Cartwright's attorney told the judge that the government and defense counsel had agreed on a recommended sentence of no more than six months. He is scheduled to be sentenced in January, and it will be up to Leon to decide the sentence.

Cartwright told investigators that he was not the source of classified information contained in a book by New York Times journalist David Sanger, according to charging documents unsealed by prosecutors.

Neither the book nor the classified subject is identified in court papers. But Sanger has written in his book, "Confront and Conceal," about a covert cyberattack on Iran's nuclear facilities and the use of a computer virus called Stuxnet to temporarily disable centrifuges that the Iranians were using to enrich uranium.

The U.S. attorney's office in Maryland announced the case on Monday.

Officials say Cartwright will make an initial appearance in federal court in Washington on Monday afternoon, when a plea hearing will also take place. Prosecutors say Cartwright was charged via criminal information, a document that is filed with a defendant's consent and that signals that a plea agreement has been reached.

Gregory Craig, an attorney for Cartwright, had no immediate comment. Craig's office said he would issue a statement later Monday.

Cartwright, 67, was vice chairman of the Joint Chiefs of Staff from 2007 until 2011, and was considered a key close adviser to Obama. A former fighter pilot, the Marine general was known for his expertise in the more highly technical areas of cyberwarfare and America's nuclear enterprise.

The New York Times reported in 2012 that Cartwright was a crucial player in the cyber operation called Olympic Games, started under President George W. Bush.

The Times had said that Obama ordered the cyberattacks sped up, and in 2010 an attack using Stuxnet temporarily disabled 1,000 centrifuges that the Iranians were using to enrich uranium.

Congressional leaders had called for an criminal investigation into who leaked the information, and some Republicans said senior administrational officials had disclosed the details of the cyber operation to bolster the president's national security credentials during the 2012 campaign. Obama, for his part, said he had zero tolerance for such leaks.

The Justice Department's investigation into the disclosure of classified information was one of several national security leak probes conducted during the Obama administration, including ones involved The Associated Press and Fox News.