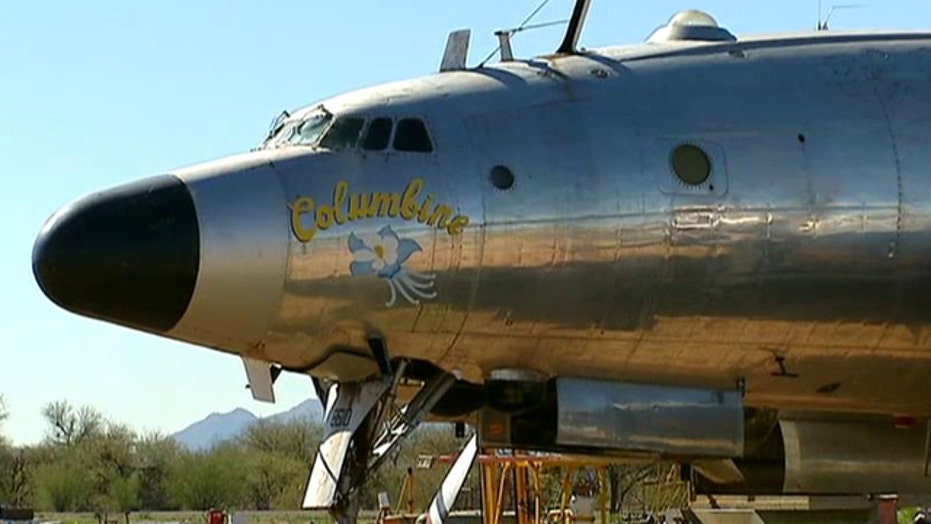 Original Air Force One plane in need of a new home

TUCSON, Ariz. – At a small airport outside of Tucson, Ariz., a forgotten piece of American history is deteriorating in the desert sun -- waiting for a new owner.

The Lockheed Constellation, resting in a field at Marana Regional Airport, once carried President Dwight Eisenhower and was the first presidential aircraft to be given the Air Force One call sign. Dubbed Columbine II in honor of the state flower of first lady Mamie Eisenhower's native Colorado, the plane was state-of-the-art in its time.

"This was a luxurious aircraft," Marana Airport manager Steve Miller said. "It included sleeping berths, marble flooring and a mahogany desk for the president."

It was on that desk that Eisenhower wrote what many historians regard as the most important speech of his presidency. Now referred to as the "Atoms for Peace" speech, the president delivered it to the U.N. General Assembly on Dec. 8, 1953.

Now, the massive plane is battling the elements in the Arizona desert.

So how did this piece of history end up here? Tim Crowley, the grandson of a past owner who is trying to help the current owners find a new home for the plane, said Columbine II is simply "something that's fallen through the cracks."

In 1954, a newer Lockheed Constellation took over as the presidential plane. Columbine II was repainted and used to ferry VIP's for many years, including Vice President Richard Nixon, and Queen Elizabeth II.

Eventually, though, its time as Air Force One was forgotten.

In 1970, the plane was sold at auction in a group of five aircraft to Crowley's grandfather Mel Christler, a businessman who wanted to retrofit the planes and use them to dust crops and fight forest fires. He had no idea, at first, it was a presidential airplane.

The plane, though, "had the wrong landing gear on it," Miller said.

Stuck with a dud, Christler used it for parts -- until a call from the Smithsonian changed everything.

"They told him that it was the first plane used by Eisenhower as president," Crowley said. "So he decided to restore it with another fellow named Harry Oliver ... and they flew it around in the early '90s.

Attempts to sell the plane fell through and, after Christler died, it eventually ended up at Marana where it now sits, after changing ownership to another group which includes Oliver. They are now trying to sell it. Various entities have voiced interest, but nobody has yet come up with the money.

Timothy Coons, who served as flight engineer on the plane's last flight 10 years ago, said, "For the derelict condition it looks like, it's actually in very good shape."

But, Coons says it will take "in the low millions" to return Columbine II to the state it was in during its Air Force One heyday. Then a home would need to be found to house and maintain the aircraft.

"There are several museums that have expressed interest in it, and one thing I've found is museums don't have any money," Crowley said.

The owners are asking $1.5 million for the craft, though Crowley said that is "very negotiable."

"She had been on that airplane as a child, and she could recall standing in certain places and talking to certain people," Crowley said. "It's like there's ghosts almost."

Ike's granddaughter is part of a group actively pursuing a plan to acquire the plane for the National Airline History Museum in Kansas City. So far they have been unable to raise the money.

Crowley hopes the ghost that Columbine II has become will soon be resurrected to its rightful place in history for all Americans to see and enjoy.

Miller also explained the historical importance of the call sign.

"That is a very significant number right there: 8610," he said, as he pointed to the digits painted under the aircraft's nose. "They changed the whole course of presidential air transport history."

In 1953, with President Eisenhower on board, air traffic control accidentally put Air Force flight 8610 in the same airspace over New York City as Eastern Airlines flight 8610. "As a result of that incident," Miller said, "they devised the Air Force One call sign for all future presidential flights."