Recount off to slow start in Florida as deadline looms

Florida’s Palm Beach County recount was delayed Tuesday night after its voting machines overheated, forcing officials to restart the recount of about 175,000 early votes, according to Susan Bucher, the county's supervisor of elections.

“We’re disappointed by the mechanical problems that are going to cause a further delay in the recount,” Bucher told reporters, according to the Miami Herald. “It became evident through the vigorous pace of counting that the machines used for the recount were starting to get stressed.”

She said the ballots didn’t tabulate properly and that two technicians from the machine’s vendor have been flown in to fix the machines while election office workers continue the recount, the Sun Sentinel of South Florida reported.

Bucher said Monday that her office would not be able to meet the 3 p.m. Thursday deadline the state has imposed, despite a 24-hour operation, the Herald reported.

She said the machines already began showing signs of problems Monday when the numbers did not match up with the early voting ballots run Tuesday, according to WPTV-TV of West Palm Beach.

As a result, the case for a deadline extension in Palm Beach County was moved to a federal court Tuesday, The Herald reported. 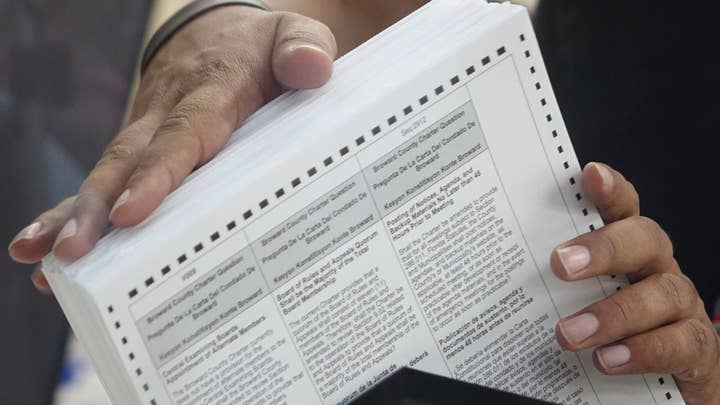 Leon County Circuit Judge Karen Gievers said she would grant an extension until Nov. 20, the report said. She concluded that the county “could not possibly” meet the deadline with its eight machines, according to the paper.

The developments added to the tumult in the political battleground state. Florida's 67 counties began a recount process that's unprecedented even in a state notorious for settling elections by razor-thin margins.

State officials said they weren't aware of any other time a race for governor or a U.S. Senate seat required a recount, let alone both in the same election.

The recounts could dredge up memories of the 2000 presidential recount, when it took more than five weeks for Florida to declare George W. Bush the winner over Vice President Al Gore by 537 votes, giving Bush the presidency.