Is it time to federalize the National Guard?

First lady Melania Trump on Monday condemned the riots that broke out across the nation over the weekend, and urged protesters to do so “in peace.”

“Saddened to see our country & communities being damaged & vandalized,” the first lady tweeted. “I ask everyone to protest in peace & focus on taking care of one another & healing our great nation.”

The first lady’s tweet comes after riots escalated in Washington, D.C., and across the country Sunday night in response to Minneapolis man George Floyd’s death in police custody last week.

First lady Melania Trump sits down at her table after speaking during the Governors' Spouses' luncheon in the Blue Room of the White House in Washington, Monday, Feb. 10, 2020. (AP Photo/Susan Walsh)

U.S. Marshals and Drug Enforcement Administration (DEA) agents were deployed into the streets of D.C. to help beef up security alongside local police, Secret Service and Homeland Security agents at the direction of the Justice Department.

Additionally, the entire Washington, D.C. National Guard was being called in to help with the response to protests outside the White House and elsewhere in the nation’s capital, according to two Defense Department officials. 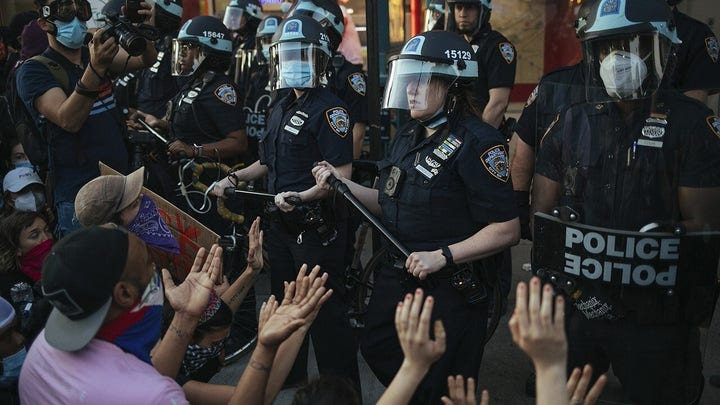 Officials told Fox News that more than 50 U.S. Secret Service agents were injured in the riots.

Over the weekend, the first lady tweeted that “our country allows for peaceful protests, but there is no reason for violence.”

“I’ve seen our citizens unify & take care of one another through COVID19 & we can’t stop now,” Trump tweeted over the weekend. “My deepest condolences to the family of George Floyd. As a nation, let's focus on peace, prayers & healing.”

The protests broke out across the nation in response to Floyd's death last Monday.

That day, an employee at a Minneapolis grocery store called police and accused Floyd of trying to pass a counterfeit $20 bill. Floyd, who is black, was then arrested and handcuffed by Officer Derek Chauvin, who is white, and pushed to the ground. Video shows Chauvin with his knee pressed to the back of Floyd’s neck as he gasped for air. Floyd, 46, later died.

Chauvin and three other officers were fired Tuesday in connection with Floyd's death. Chauvin was charged Friday with third-degree murder and manslaughter in Minnesota.

Meanwhile, White House Press Secretary Kayleigh McEnany on Monday pushed back on calls for President Trump to address the nation amid the riots and protests that broke out across the country in response Floyd’s death, maintaining that the president is committed to “action.”

“This president has been very clear that we need law and order in this country,” McEnany said, adding that violent protest “demeans the peaceful protesters who have a legitimate grievance when we see angry mob mentality take over and those horrific images of businesses burning and fires in the streets of this country.”

When asked whether the president would address the nation amid the unrest, McEnany responded: “A national Oval Office address is not going to stop Antifa.”

“What’s going to stop is action. And this president is committed to acting on this,” she said, adding that his focus “is acting and keeping our streets safe.”