A federal appeals court says Colorado was wrong to nullify the ballot of a so-called 'faithless elector' who refused to endorse Hillary Clinton; Shannon Bream reports on the ruling that could have potential 2020 implications.

Democrats have increasingly sought to erase the Electoral College's influence by promoting state laws that would force electors to vote for the national popular vote leader  -- and those laws were now in jeopardy as a result of the court's ruling, legal experts said.

The decision, however, also raised the prospect that electors could legally defect at the last minute, and decide the occupant of the White House on their own in dramatic fashion, weeks after Election Day.

The 10th U.S. Circuit Court of Appeals held that the Colorado secretary of state violated the Constitution in 2016 when he removed an elector and nullified his vote because the elector refused to cast his ballot for Democrat Hillary Clinton, who received a plurality of the popular vote both nationally and in Colorado.

The rogue elector was part of an unsuccessful scheme to convince enough members of the Electoral College to unite behind an alternative candidate and deny Donald Trump the presidency.

The split decision by a three-judge panel on the Denver appeals court asserted: "Article II and the Twelfth Amendment provide presidential electors the right to cast a vote for President and Vice President with discretion. And the state does not possess countervailing authority to remove an elector and to cancel his vote in response to the exercise of that Constitutional right."

The panel continued, "The electoral college did not exist before ratification of the federal Constitution, and thus the states could reserve no rights related to it under the Tenth Amendment. Rather, the states possess only the rights expressly delegated to them in Article II and the Twelfth Amendment."

The appeals court reasoned that once electors show up at the Electoral College, they essentially become federal actors performing a "federal function," independent of state control.

Prominent Democrats, including Rep. Alexandria Ocasio-Cortez of New York, have slammed the Electoral College in recent weeks, calling it a racist "scam."

AOC UNDER FIRE FOR CALLING ELECTORAL COLLEGE A RACIST 'SCAM'

"The Electoral College has a racial injustice breakdown," Ocasio-Cortez said on Instagram Monday. "Due to severe racial disparities in certain states, the Electoral College effectively weighs white voters over voters of color, as opposed to a 'one person, one vote' system where all our votes are counted equally." 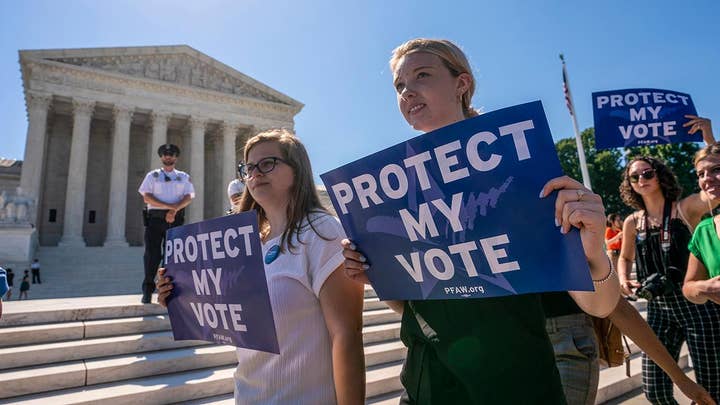 Organized efforts to undermine the Electoral College have picked up steam this year. The so-called National Popular Vote interstate compact, which would commit states' electors to the winner of the national vote, has been adopted by 16 jurisdictions, accounting for 196 electoral votes, including 15 states and the District of Columbia.

However, the compact, by its terms, will only take effect if jurisdictions accounting for at least 270 of the 538 total votes available in the Electoral College also sign on.

ANALYSIS: IN DEFENSE OF THE ELECTORAL COLLEGE

More than two dozen states also have laws binding electors to the results of the popular vote in those states. But the actual penalties for so-called "faithless electors" are minimal and in many cases non-existent.

The Tuesday ruling could spell doom for a new Colorado law that effectively signed the state onto the national compact, by prohibiting states from forcing their electors to vote for either the national or state popular vote winner or leader. Other states that have signed onto the compact include Rhode Island, Vermont, Hawaii, Delaware, Maryland, Massachusetts, New Mexico, Washington, Connecticut, New Jersey, Illinois, California, and New York.

At the same time, Frank McNulty, an adviser to Protect Colorado's Vote, which wants voters to overturn the law, cautioned that the ruling could also free electors to decide on their own to support the candidate with the most votes nationally -- or any candidate, for that matter.

"It is a double-edge decision," he said.

The Electoral College system is established in the Constitution. When voters cast a ballot for president, they are actually choosing members of the Electoral College, called electors, who are pledged to that presidential candidate. The electors then choose the president. Electors are selected by state parties at nominating conventions, and generally consist of party leaders, activists, and other luminaries.

"It is a double-edge decision."

Democrats, who currently have a stranglehold on power in population-dense states like California and New York, have long protested the Electoral College. States receive electoral votes equivalent to their number of congressional districts plus senators, which allows less populous states to have more impact than they would under a popular vote system.

The upcoming 2020 census is expected to result in some shifts in Electoral College numbers by 2024, including an increase in electoral votes for traditional GOP strongholds like Texas.

Tuesday's ruling applies only to Colorado and five other states in the 10th Circuit: Kansas, New Mexico, Oklahoma, Utah and Wyoming.

But it could influence future cases nationwide in the unlikely event that enough Electoral College members strayed from their states' popular vote to affect the outcome of a presidential election, constitutional scholars said.

FILE - In this Dec. 19, 2016, file photo, Colorado elector Micheal Baca, second from left, talks with legal counsel after he was removed from the panel for voting for a different candidate than the one who won the popular vote, during the Electoral College vote at the Capitol in Denver. Colorado Secretary of State Wayne Williams, front right, looks on. On Tuesday, Aug. 20, 2019, the 10th U.S. Circuit Court of Appeals ruled that Williams violated the Constitution when he removed Baca from the panel. (AP Photo/Brennan Linsley, File)

The elector at the center of the Colorado case, Micheal Baca, was part of a group known as "Hamilton electors" who tried to convince electors who were pledged to Clinton or Donald Trump to unite behind a consensus candidate to deny Trump the presidency.

After a flurry of filings in state and federal courts, the electors met on Dec. 19, 2016, and Baca crossed out Clinton's name on his ballot and wrote in John Kasich, the Republican governor of Ohio who also ran for president.

Then-Secretary of State Wayne Williams refused to count the vote and removed Baca as an elector. He replaced him with another elector who voted for Clinton.

Colorado's current secretary of state, Jena Griswold, decried the ruling Tuesday in Colorado but did not immediately say if she would appeal.

"This court decision takes power from Colorado voters and sets a dangerous precedent," she said. "Our nation stands on the principle of one person, one vote."

Baca's attorneys said the U.S. Supreme Court will likely hear the case because it conflicts with a decision from Washington state's Supreme Court. That court said in May that electors could be fined for not casting ballots for the popular vote winner.

Jan. 6, 2017: Rep. Maxine Waters, D-Calif., holds up a written objection to the Electoral College vote and calls on a Senator to join in the objection during a joint session of Congress to count the electoral ballots, on Capitol Hill in Washington. (AP)

The court ruling in Denver could be important if a future Electoral College is so closely divided that a handful of "faithless electors" change the outcome by casting a ballot contrary to the popular vote, said Ned Foley, a professor at Ohio State University's law school.

"This opinion would be taken very seriously," he said. "It would be considered judicial precedent."

“Americans expect and deserve the winner of the popular vote to win office,” Cohen said at the time. “More than a century ago, we amended our Constitution to provide for the direct election of U.S. Senators. It is past time to directly elect our president and vice president.”

However, a constitutional amendment eliminating the Electoral College would require two-thirds of both the House and Senate to approve the measure, along with three-fourths of state legislatures. Alternatively, Congress could hold a national convention and states could host ratifying conventions, but a two-thirds majority would still be necessary.

Trump secured victory in the 2016 election by winning the Electoral College with 304 votes to Clinton’s 232 despite Clinton winning nearly three million more votes than Trump.

John Quincy Adams, Rutherford B. Hayes, Benjamin Harrison, and George W. Bush also won the White House without winning a plurality of the popular vote. Of those presidents, only Bush was re-elected to a second term.