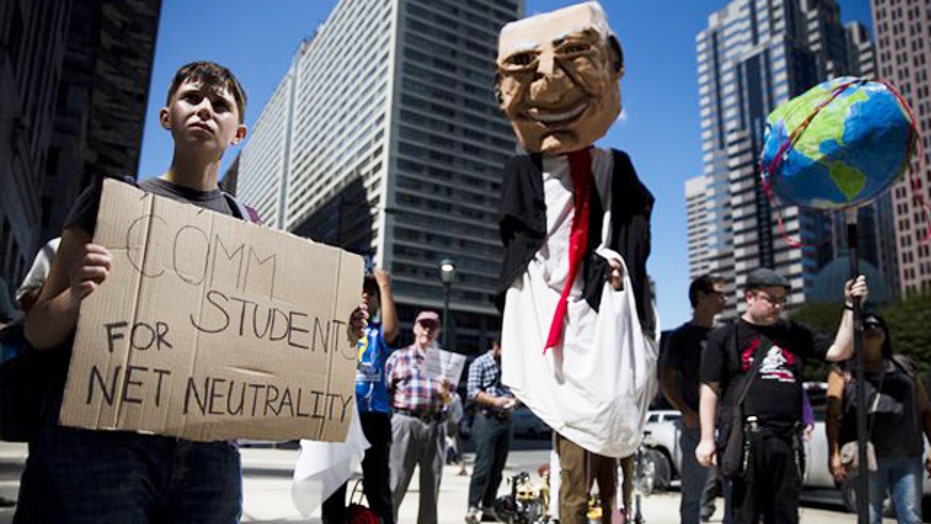 The Federal Communications Commission on Thursday adopted sweeping new regulations sought by President Obama for how Americans use and do business on the Internet, in a party-line vote that is sure to be challenged by the broadband industry.

The commission, following a contentious meeting, voted 3-2 to adopt its so-called net neutrality plan -- a proposal that remained secret in the run-up to the final vote.

On its surface, the plan is aimed at barring service providers from creating paid "fast lanes" on the Internet, which consumer advocates and Internet companies worry would edge out cash-strapped startups and smaller Internet-based businesses. Chairman Tom Wheeler said it would ensure an "open, unfettered network."

But the rules, more broadly, would put the Internet in the same regulatory camp as the telephone by classifying it like a public utility, meaning providers like Comcast or Verizon would have to act in the "public interest" when providing a mobile connection to your home or phone.

Republican Commissioner Ajit Pai, who delivered some of the most scathing criticism of the plan Thursday, warned the policy represents a "monumental shift" to "government control of the Internet."

Further, he accused the FCC of bending to the will of Obama, who last fall came out in favor of such a sweeping regulatory plan.

Pai said the FCC was reversing course from past positions for one reason: "President Obama told us to do so."

He warned of a litany of negative consequences, intended or not, from the net neutrality plan. He said it allows rate regulation -- and, ultimately, rates will go up and broadband service will slow.

Pai said that while the plan defers a decision on applying a service fee to Internet bills -- much like is applied to phone bills -- that surely will change.

"The order explicitly opens the door to billions of dollars in new taxes," he said. "Read my lips: More new taxes are coming. It's just a matter of when."

Further, he pointed to slower Internet speeds in Europe, which largely treats the Internet as a public utility, in warning that the additional regulation will lead to less investment and slower speeds in the U.S. as well.

"The Internet is not broken. There is no problem for the government to solve," Pai said.

Republican lawmakers, as well, blasted the proposal as an antiquated solution that would hurt, not help, Internet innovation.

"The Obama Administration needs to get beyond its 1930s rotary-telephone mindset and embrace the future," Senate Majority Leader Mitch McConnell, R-Ky., said in a statement.

While the broadband industry is expected to sue, Republicans in Congress said they will try to pass legislation scrapping the rules, although it's unlikely that such a bill would be signed into law by Obama.

But Democrats on the commission hailed the plan. To charges that the plan represents a secret scheme to regulate the Internet, Wheeler said: "Nonsense."

Democratic Commissioner Mignon Clyburn -- despite reports she was seeking last-minute changes in the plan to scale it back -- also voted with Wheeler on Thursday. She said it "strikes the right balance."

At stake, Clyburn said, is the risk of businesses getting preferential treatment over start-ups by getting better Internet speeds, or teachers having to worry about whether students can do research online without websites loading at "dial-up speeds."

Twitter said the new rules were a matter of protecting free expression.

"Safeguarding the historic open architecture of the Internet and the ability for all users to `innovate without permission' is critical to American economic aspirations and our nation's global competitiveness," Twitter wrote in a company blog post this week.

Net neutrality is the idea that websites or videos load at about the same speed. That means you won't be more inclined to watch a particular show on Amazon Prime instead of on Netflix because Amazon has struck a deal with your service provider to load its data faster.

For years, providers mostly agreed not to pick winners and losers among Web traffic because they didn't want to encourage regulators to step in and because they said consumers demanded it. But that started to change around 2005, when YouTube came online and Netflix became increasingly popular. On-demand video became known as data hogs, and evidence began to surface that some providers were manipulating traffic without telling consumers.

By 2010, the FCC enacted open Internet rules, but the agency's legal approach was eventually struck down. FCC officials would erase the legal ambiguity by no longer classifying the Internet as an "information service" but a "telecommunications service" subject to Title II of the 1934 Communications Act.

That would dramatically expand regulators' power over the industry by requiring providers to act in the public's interest and enabling the FCC to fine companies found to be employing "unreasonable" business practices.

The FCC says it won't apply some sections of Title II, including price controls. That means rates charged to customers for Internet access won't be subject to preapproval, though critics warn of future regulation. But the law allows the government to investigate if consumers complain that costs are unfair.