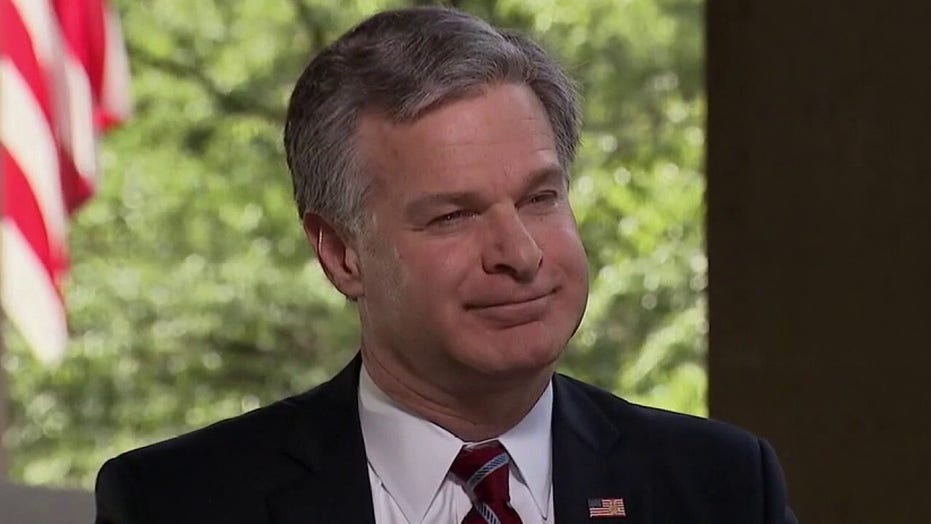 FBI Director Christopher Wray on Tuesday warned Americans that the Chinese government’s theft of American information is taking place on so large a scale, suspected incidents make up nearly half of his bureau’s counterintelligence cases.

Speaking at an event hosted by the Hudson Institute in Washington, Wray said that Chinese thefts amount to “one of the largest transfers of wealth in human history,” and that the American people are the victims.

POMPEO WARNS OF POTENTIAL RESTRICTION OF CHINESE TIKTOK APP; US USERS MAY BE CEDING INFO TO 'CHINESE COMMUNISTS'

“Of the nearly 5,000 active FBI counterintelligence cases currently under way across the country, almost half are related to China,” Wray said. “And at this very moment, China is working to compromise American health care organizations, pharmaceutical companies and academic institutions conducting essential COVID-19 research.”

In fact, Wray said that most Americans have already been affected.

“If you’re an American adult, it is more likely than not that China has stolen your personal data,” he said.

As an example, Wray noted that in 2014 Chinese hackers stole more than 21 million records from the U.S. Office of Personnel Management.

Wray said that the Chinese Communist Party “uses a diverse range of sophisticated techniques — everything from cyber intrusions to corrupting trusted insiders,” and even “outright physical theft.” To do this, he claimed, they use “a wide range of actors — including not just Chinese intelligence services, but state-owned enterprises, ostensibly private companies, certain kinds of graduate students and researchers, and a whole variety of other actors working on their behalf.”

The director said that, in some cases, China uses social media platforms used by Americans “to identify people with access to our government’s sensitive information and then target those people to try to steal it.”

In one instance, he recalled, a Chinese operative posed as a headhunter, offering money to an American citizen in exchange for “consulting services” that related to sensitive data. In that particular case, the American reported the suspicious behavior to the FBI.

Wray’s remarks come a day after Secretary of State Mike Pompeo said the Trump administration is considering restricting United States' users' access to the Chinese social media application TikTok over concerns it is potentially being used by the Beijing government as a means to surveil and propagandize people.

Pompeo warned Americans that they should be cautious in using the video app, lest they want their private information "in the hands of the Chinese Communist Party.”

Fox News’ Bill Mears, Gregg Re and Charles Creitz contributed to this report.