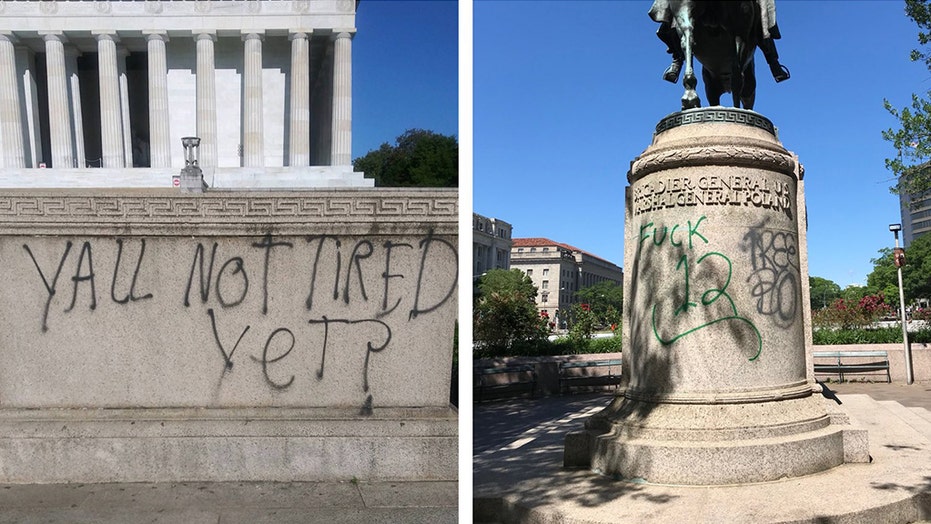 Dr. Marc Siegel says he's very concerned about the spread of COVID-19 amid the nationwide protests.

As protests swept the nation following the death of George Floyd in the custody of the Minneapolis Police Department last week, some of the most iconic monuments in Washington, D.C. were vandalized Saturday night.

The affected monuments, photos of which were posted in a tweet by the National Mall National Park Service (NPS), included the Lincoln Memorial, the World War II Memorial and the statue of General Casimir Pulaski. It is not clear to what extent any other monuments might have been vandalized.

NATIONAL GUARD MOBILIZED IN STATES ACROSS THE COUNTRY AS RIOTS, LOOTING FEARED

"In the wake of last night's demonstrations, there are numerous instances of vandalism to sites around the National Mall," The National Mall NPS tweeted. "For generations the Mall has been our nation’s premier civic gathering space for non-violent demonstrations, and we ask individuals to carry on that tradition."

Floyd, who is black, died, according to officials, after an officer used his knee to pin Floyd to the ground by his neck as Floyd gasped for air and was not visibly resisting arrest in several minutes of the incident caught on video. The officer who pinned Floyd to the ground, Derek Chauvin, was charged with third-degree murder and manslaughter.

Spray paint that reads "No More Black Bodies" is painted near the Washington Monument on the National Mall in Washington, Sunday, May 31, 2020, after protests over the death of George Floyd. Floyd died after being restrained by Minneapolis police officers on Memorial Day. (AP Photo/Carolyn Kaster)

On Saturday night President Trump went to the bunker underneath the White House as the U.S. Secret Service worried about the president's safety while demonstrators approached White House grounds.

"It wasn't long," a senior administration official said of the action taken to protect the president, "but he went."

The Secret Service said that "demonstrators repeatedly attempted to knock over security barriers, and vandalized six Secret Service vehicles" on Saturday, leading to one arrest.

On Sunday, as protests again ramped up in D.C. and around the country, the Secret Service asked people to stay away from the White House.

"In an effort to ensure public safety, pedestrians and motorists are encouraged to avoid streets and parks near the White House complex," the Secret Service tweeted.