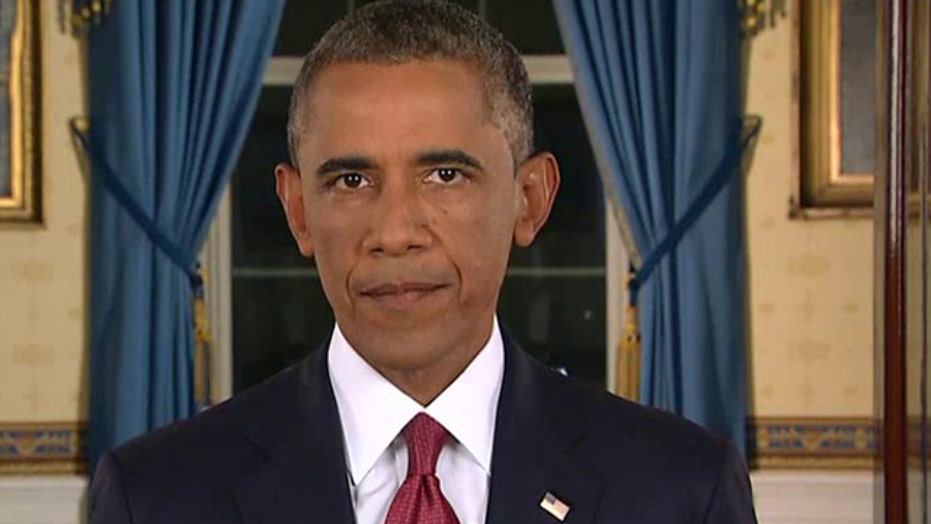 Obama: We will 'degrade and ultimately destroy' ISIL

WASHINGTON – It's not as clear as President Obama made it sound Wednesday night that he has the authority to go after Islamic State militants in the manner he plans, with sustained airstrikes and associated military actions designed to neutralize the foe. What is clear, though, is that he's going ahead with it anyway.

In his speech to the nation, Obama also said his strategy against militants operating in Iraq and Syria calls for no U.S. troops in the fight, but it's not that simple.

A look at some of his claims and how they compare with facts:

OBAMA: "I have the authority to address the threat from ISIL."

THE FACTS: Obama didn't elaborate on his claim of authority to conduct a potentially yearslong campaign against the Islamic State group, or ISIL, without new congressional approval. But administration officials briefing reporters before the speech said it is grounded in two authorizations passed by Congress, in 2001 and 2002. Obama himself criticized the 2001 authorization in the past and his administration called the 2002 resolution outdated. But now, both are being cited to support his action in Iraq and Syria.

The 2001 authorization supported President George W. Bush's war against al-Qaida and the then-Taliban government of Afghanistan. In a May 2013 speech, Obama said he wanted to "refine and ultimately repeal" it because "we may be drawn into more wars we don't need to fight." The Islamic State group was once tied to al-Qaida but has broken those links and now considers it a rival.

In short, it's in dispute whether Obama has the authority he claims. The ability of presidents to launch sustained military action on their own is questioned whenever it happens, but it tends not to stay their hand.

The administration does acknowledge it needs approval from Congress to conduct one part of its strategy — training and equipping Syrian opposition forces.

OBAMA: "We will send an additional 475 service members to Iraq. As I have said before, these American forces will not have a combat mission — we will not get dragged into another ground war in Iraq. ... It will not involve American combat troops fighting on foreign soil."

THE FACTS: That's splitting hairs. It's true that the troops he is sending, in addition to the approximately 1,000 already there, are not intended to get into a shooting war. But some will be advising Iraqi army commanders in the field so they can advance more decisively against Islamic State forces under the cover of U.S. bombs. And under standard military rules of engagement, they will be allowed to defend themselves if shot at.

Obama said he wants Americans to understand that this will be "different from the wars in Iraq and Afghanistan," where hundreds of thousands of U.S. troops fought extended battles. To make his point he termed his Iraq-Syria action a "counterterrorism campaign" to "take out" Islamic State forces using American air power and "support" for "partner forces" on the ground.

Even so, it will be a shooting war and no one can say that U.S. troops will not engage in combat and possibly get killed. Obama acknowledged that any military action involves risk to those who carry them out.