What message should the Facebook CEO send the public? Attorney Alex Swoyer weighs in on 'Fox & Friends First.'

Facebook CEO Mark Zuckerberg, long celebrated as a tech genius for building a platform embraced by 2.2 billion active users, is used to being in charge.

But for the next two days, the 33-year-old is likely to face the nation’s scorn as he endures a grueling Capitol Hill interrogation over why the social media giant allowed a data-mining company to get the personal information of at least 87 million users.

On Wednesday, the showdown continues, as Zuckerberg is slated to appear for round two before the lawmakers of the House Energy and Commerce Committee.

Ahead of the hearing, Zuckerberg posted on Facebook: "In an hour I’m going to testify in front of the Senate about how Facebook needs to take a broader view of our responsibility -- not just to build tools, but to make sure those tools are used for good."

Zuckerberg arrived Monday on Capitol Hill contrite and apologetic, amid the threat of new government regulations.

“Looking back, it's clear we were too slow identifying election interference in 2016, and we need to do better in future elections,” Zuckerberg said in an open letter posted on Facebook on Monday minutes before he met privately with senators.

In his first meeting Monday, Zuckerberg entered and exited a one-hour talk with Florida Democratic Sen. Bill Nelson without talking to reporters. 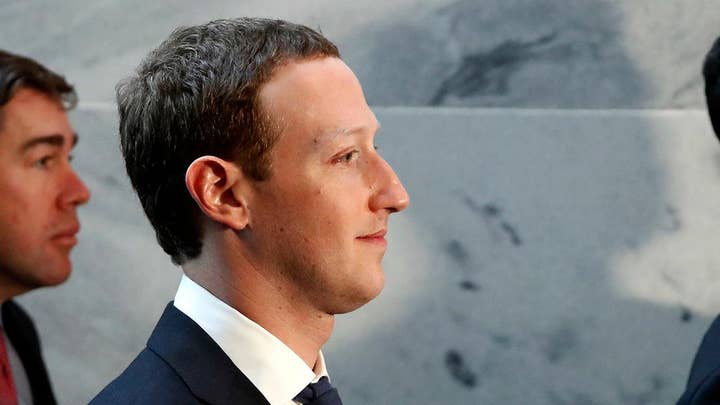 But Nelson, the top Democrat on the Commerce, Science and Transportation committee, which will hear Zuckerberg’s testimony Tuesday, said the Facebook executive and cofounder was “forthright and willing to turn things around where mistakes have been made.”

Zuckerberg, who helped start Facebook in 2004 while at Harvard, has been in full damage-control mode since reports surfaced in recent weeks that Cambridge Analytica, a political data-mining firm affiliated with Donald Trump’s 2016 presidential campaign, may have used ill-gotten user data to try to influence elections.

Nelson said Zuckerberg told him Monday in their one-on-one meeting: “We were lied to (Cambridge Analytica.) And we should have caught that.”

The senator also said he believes Zuckerberg was sincere and is taking the issue “seriously” because “he understands that regulations are right around the corner.”

Nelson expressed skepticism about whether Facebook could fix its own problem. But he didn’t commit to regulations, suggesting instead that he wants to hear more from Zuckerberg and what special counsel Robert Mueller concludes about Russia meddling in the 2016 elections before making a decision about Facebook and the rest of the social media industry.

In prepared testimony for the House hearing, Zuckerberg will give a statement similar to the one on Facebook.

“We were too slow to spot and respond to Russian interference, and we’re working hard to get better," he says. “That goes for fake news, foreign interference in elections and hate speech as well as developers and data privacy. We didn’t take a broad enough view of our responsibility, and that was a big mistake. It was my mistake, and I’m sorry. I started Facebook, I run it, and I’m responsible for what happens here.”

In Zuckerberg’s Facebook post, he also announced plans for new artificial intelligence tools that will “take down thousands” of fake accounts and verify every political advertiser and to establish an independent election research commission.

And he said that preventing “interference and misinformation” in the 2018 elections is among his “top priorities.”

Facebook is also set this week to tell its roughly 2.2 billion users which apps each is using and what information the apps might have shared.

On Sunday, Cubeyou, a second data analytics firm used by Facebook, was suspended by Facebook as an investigation unfolds.

“Looking back, it's clear we were too slow identifying election interference in 2016, and we need to do better in future elections"

Beyond the issue of protecting Facebook users’ personal information, Zuckerberg also is expected to face questions on Capitol Hill about the extent to which Russia influenced the 2016 White House race, following revelations that Russian bought $100,000 worth of Facebook ads and whether conservative content on the site is being censored.

On Sunday, Louisiana GOP Sen. John Kennedy also opened the door to regulating social media, in the wake of the personal-data scandal.

“I don't want to hurt Facebook. I don't want to regulate them half to death,” Kennedy, a member of the Senate Judiciary Committee, said on CBS’ “Face the Nation.” “But we have a problem.”

When asked whether regulation is the answer, Kennedy said, “It may be the case.”

Perhaps the biggest questions Zuckerberg is expected to face on Capitol Hill are: Can Facebook protect its data and did the company fail to because of its business model? Or did other factors create an obstacle to change?