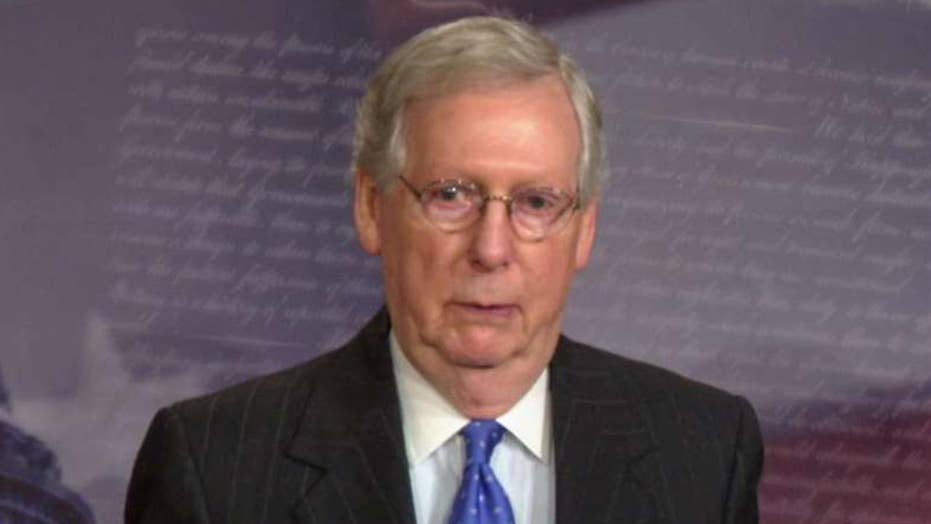 Senate majority leader tells reporters that the president's midterm rallies had a positive impact on the outcome.

The Republican party's expanded Senate majority will smooth the way for President Trump’s judicial nominees who have been lined up in the bullpen for nearly two years awaiting confirmation - and offers a clearer path for a third Supreme Court pick should the opportunity arise before 2020.

After a heated midterm election season, Democrats comfortably secured the majority in the House of Representatives for the first time since 2011. Republicans meanwhile increased their Senate control with at least a 52-46 margin by Wednesday afternoon, flipping several critical seats in the process, including wins by Josh Hawley over two-term Sen. Claire McCaskill, D-Mo.; Rep. Kevin Cramer over incumbent Sen. Heidi Heitkamp, D-N.D.; and Mike Braun over incumbent Sen. Joe Donnelly, D-Ind.

But the GOP Senate majority could still grow—with two seats still up for grabs.

The historic Arizona Senate race between Democratic Rep. Kyrsten Sinema and Republican Rep. Martha McSally has still not been called hours after polls closed. The two female lawmakers are vying for the soon-to-be vacant seat of Sen. Jeff Flake, R-Ariz., who will retire this year.

In Mississippi, the seat will not be decided until Nov. 27, when the state holds a runoff election between Republican incumbent Sen. Cindy Hyde-Smith and Democratic challenger Mike Espy. Mississippi saw a four-way race to replace retiring GOP Sen. Thad Cochran. Espy and Hyde-Smith were tied with 41 percent of the vote, with the other Republican candidate, Chris McDaniel, lagging well behind with 16 percent. The fourth candidate, Democrat Tobey Bernard Bartee had just 1 percent of the vote.

Because Hyde-Smith split the GOP vote with McDaniel, her chances of being victorious over Espy later this month are high.

Senate Majority Leader Mitch McConnell, R-Ky., acknowledged that the heated confirmation process for the newest Supreme Court Justice Brett Kavanaugh was an “adrenaline shot” for Republicans in the midterms.

“I think the Republicans, core voters in the states that were critical to us, were highly offended by the tactics and it was like an adrenaline shot,” McConnell said Wednesday. “We were worried about a lack of intensity on our side and I think the Kavanaugh fight certainly provided that and was helpful.”

Numerous accusers came forward during Kavanaugh’s confirmation process accusing him of sexual assault and misconduct leading to a brutal hearing where the first accuser, Dr. Christine Blasey Ford, testified she was “100 percent” certain Kavanaugh assaulted her at a high school party more than 35 years ago.

Kavanaugh vehemently denied the allegations, the FBI supplemental background investigation could not find supporting and corroborating evidence to back the claims, and Republicans accused Democrats of treating the nominee unfairly. 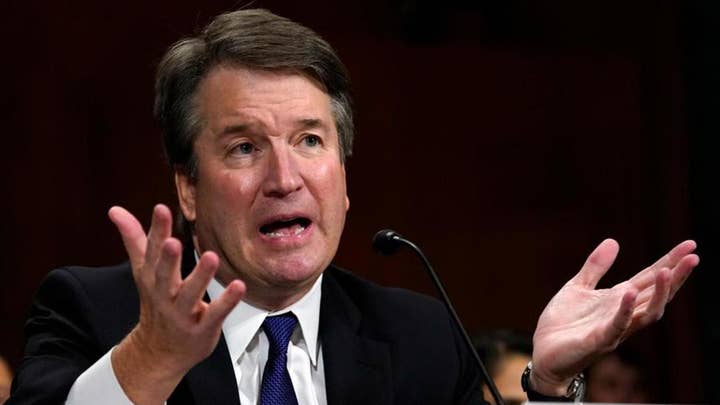 Democrats in deep red states, like Heitkamp in North Dakota, voted against Kavanaugh’s confirmation to the high court, potentially contributing to her re-election defeat. Heitkamp, throughout her campaign though, said she had “no regrets” on her decision for the nominee.

“It is noteworthy that the one who survived voted for Kavanaugh,” McConnell said of Democratic Sen. Joe Manchin of West Virginia who easily won re-election on Tuesday.

But McConnell underscored that his priority for this legislative cycle, and the next, has and will be the judiciary.

“My top priority, I made it very clear, it is the judiciary, the two Supreme Court appointments. 39 circuit judges. 84 judges and we aren’t through doing those this year,” McConnell said, noting the president has “done an excellent job” in appointing nominees. “We intend to keep confirming as many as we possibly can for as long as we’re in a position to do it.”

He added: “It will still be my priority in setting the agenda here in the Senate, and the next Congress as well.”

McConnell also said he would push for more women to join the Senate Judiciary Committee.

“It’s been a frustration,” McConnell said. “I’m going to be trying to convince one of our women to go on the Judiciary Committee. Something I’ve tried, and failed, in the last couple of Congresses.”