A woman related to a former Republican Senate candidate is accusing former Vice President Joe Biden of sexual harassment, claiming he complimented her breasts at a political event in Delaware when she was 14 years old in 2008.

A past organizer of the event, however, now says Biden was not even at the dinner in question.

The outlet said Murry is the niece of Christine O’Donnell -- a Republican who ran against Biden for the Senate that year and later mounted another unsuccessful bid for the same seat -- and often accompanied her aunt on the campaign trail. She claims the comment was made after Biden and her aunt greeted each other.

"When it was Biden and my aunt’s turn to say hello he quickly turned to me and asked how old I was," Murry told Law&Crime. "I replied with my age and he replied with the comment, ‘Fourteen? You’re very well endowed for 14!’" 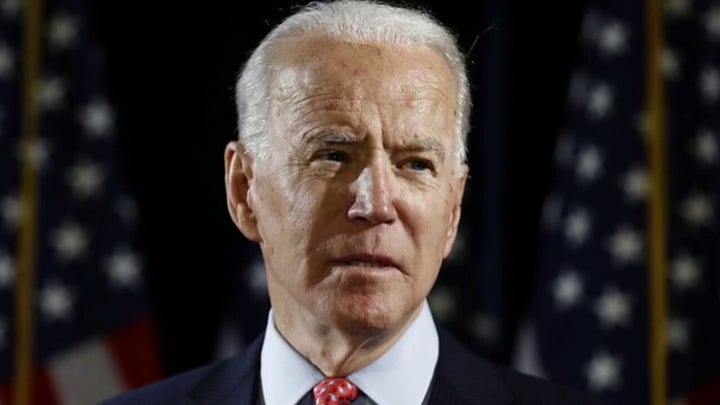 J. Brian Murphy, the former vice president of the dinner in question, also said in a statement over the weekend that he reviewed the records and can “conclusively say” Biden “was not at the dinner.”

“The year 2008 is particularly noteworthy because it is the only year where the Senator agreed to appear in a video, which was a spoof of Meet the Press.  It was taped earlier that week.  It was our hope the Senator would attend the dinner to see the video, but he sent regrets.  Had he been there, myself as well as others would have known and in fact, I would have acknowledged him from the stage,” he said. “Senator Biden was not at the Gridiron Dinner in May of 2008.”

Local news reports from the time said he was having sinus surgery earlier that week, and was scheduled to be out of work for the whole week. A personal schedule for Biden obtained by Fox News also listed an aide as going in his place to the Gridiron dinner.

O'Donnell, though, backed up Murry's account on April 8 after she first addressed the claims in a Facebook post, which is no longer available to the public. O'Donnell, in her own Facebook post that remains viewable, wrote: "I will never forget that day. It was not only the words he said, it was the beyond-creepy way he looked her up and down. She was only 14 years old."

“Yes, it could have been another year. So what? She was a teenager when I ran for office. It doesn't make it okay,” she wrote to Fox News.

One of her friends, Victoria Anstey, expressed that politics was not involved.

“I can’t stand Trump,” the self-described feminist told Law&Crime. “This isn’t politically motivated. This is about men in power using their status to silence victims.”

She reportedly said Murry was telling the truth, and relayed that Murry told her "he looked at her chest and she was well endowed."

Reached by Fox News, Anstey declined to comment further but said "everything I have to say is noted in the article."

Aileen Callaghan, another friend who was quoted in the Law&Crime article saying Murry told her about the encounter a decade ago, told Fox News that the reporting in the piece was “accurate” and declined further comment.

Murry explained to Law&Crime that she didn't know what Biden's remarks meant at the time and looking back was disturbed by what he told her.

“I feel his comments were verbal sexual harassment,” Murry said. “I think I was too naive to realize exactly what it meant at the time but I vividly remember the uncomfortable feeling I had in the pit of my stomach during the whole encounter. It wasn’t Biden’s words alone that made me so uncomfortable, it was the look, the tone, the whole general vibe was off.”

Murry insisted that her coming forward has nothing to do with politics, telling Law&Crime: “No man or woman should get away with acting that way and that is what this boils down to."

"Alright guys I’ve told this story a few times to friends and family, but with Bernie dropping out and everyone talking about Biden, instead of commenting everywhere I’m going to take the time to put this little story out there," Murry wrote at the time.

She also claimed to Law&Crime that she saw Biden a few more times at other political events and that “his eyes never were on my face.”

Fox News also reached out to Jenna Murry, who is Eva's sister, for comment.