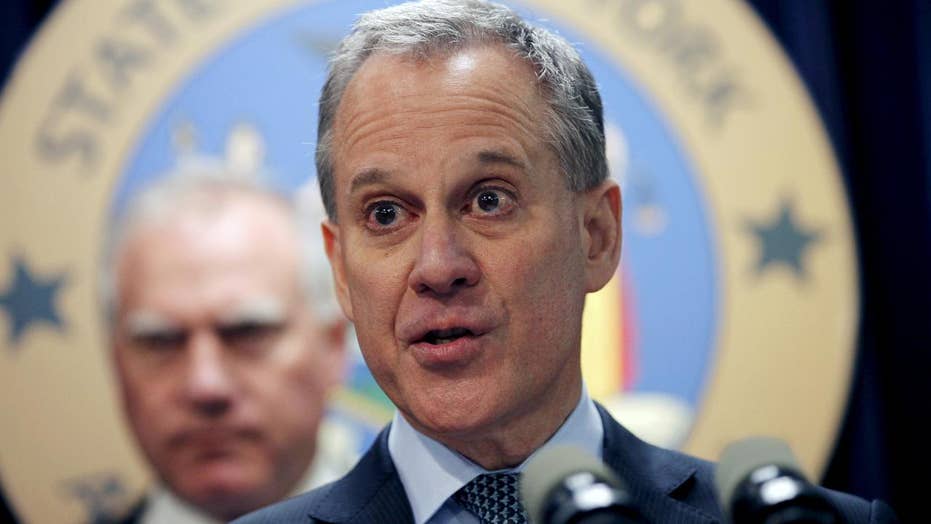 New York Attorney General Eric Schneiderman announced his resignation Monday night, hours after The New Yorker magazine published allegations of physical abuse and controlling behavior by four women who had romantic relationships or encounters with him.

"It’s been my great honor and privilege to serve as Attorney General for the people of the State of New York," Schneiderman said in a statement. "In the last several hours, serious allegations, which I strongly contest, have been made against me. While these allegations are unrelated to my professional conduct or the operations of the office, they will effectively prevent me from leading the office’s work at this critical time. I therefore resign my office, effective at the close of business on [Tuesday]."

It was not immediately clear who would succeed Schneiderman, a Democrat who was seeking a third term as attorney general this November and had been tipped as a possible successor to New York Gov. Andrew Cuomo.

Schneiderman was accused in the wide-ranging report -- co-written by Ronan Farrow -- of hitting and choking women without their consent, asking to use "about half" of a woman's prescription of the anti-anxiety drug Xanax, and mocking anti-gun demonstrators including parents from Sandy Hook Elementary School, the site of the 2012 shooting massacre, as "losers."

Schneiderman, long a pillar of New York's Democratic establishment and a critic of President Trump, has cast himself as a supporter of the #MeToo movement after Farrow uncovered a long list of rape and sexual harassment accusations against the now-disgraced Hollywood titan Harvey Weinstein.

Two of Schneiderman's accusers, Michelle Manning Barish and Tanya Selvaratnam, spoke to The New Yorker on the record to document claims that Schneiderman nonconsensually hit and choked them. A third woman who also was involved with Schneiderman told her story to the other two women, but said she was too frightened to come forward. A fourth woman said Schneiderman slapped her when she rebuffed him, but also asked to remain unidentified. The New Yorker said it vetted the third woman's allegations, and saw a photo of what the fourth woman said was her injury.

Manning Barish told the magazine that she dated Schneiderman, now 63, between the summer of 2013 and New Year's Day 2015. According to her account, Schneiderman started abusing her weeks after their relationship became physical. Though she reconciled with him after an initial incident, Manning Barish said that Schneiderman often would slap her during sex without her consent and made critical comments about her appearance.

He "would almost always drink two bottles of wine in a night, then bring a bottle of Scotch into the bedroom. He would get absolutely plastered five nights out of seven," Manning Barish said.

In one instance, she said Schneiderman told her to get a small tattoo removed from her wrist. According to her, he said the body art was inappropriate for her if she was to be a politician's wife.

Manning Barish said Schneiderman often asked to to refill her Xanax prescription so that he could take "about half" the pills for himself. She also said he frequently mocked her activism on behalf of progressive causes, in once instance referring to anti-gun demonstrators as "losers."

"Taking a strong woman and tearing her to pieces is [Schneiderman's] jam," she told the magazine.

The acclaimed author Salman Rushdie, who reportedly dated Manning Barish before Schneiderman did, said she told the novelist about the alleged abuse. "She called me and told me he had hit her... She was obviously very upset. I was horrified."

"[H]e started calling me his 'brown slave' and demanding that I repeat that I was 'his property,'" Selvaratnam told the magazine.

Selvaratnam also told The New Yorker that she met with another former girlfriend of Schneiderman in February of this year. The unidentified woman told Selvaratnam that Schneiderman had slapped, choked and spat at her and also belittled her appearance.

The woman told Selvaratnam that she had told "several friends" about Schneiderman's behavior. According to The New Yorker: "A number of them advised her to keep the story to herself, arguing that Schneiderman was too valuable a politician for the Democrats to lose."

Schneiderman, a former New York state senator who was elected state attorney general in 2010, issued a statement to the magazine saying: "In the privacy of intimate relationships, I have engaged in role-playing and other consensual sexual activity. I have not assaulted anyone. I have never engaged in nonconsensual sex, which is a line I would not cross."

Schneiderman's ex-wife, Jennifer Cunningham, said in a statement that "I've known Eric for nearly 35 years as a husband, father and friend. These allegations are completely inconsistent with the man I know, who has always been someone of the highest character, outstanding values and a loving father. I find it impossible to believe these allegations are true."

New York politicians from both parties, led by Cuomo, had called on Schneiderman to resign.

"No one is above the law, including New York's top legal officer," said Cuomo, who added that he would ask for an "immediate investigation" and would "proceed as the facts merit."

Actress Cynthia Nixon, who is challenging Cuomo in the Democratic primary, tweeted that Schneiderman had made "the right decision" to resign.

"The women who came forward so courageously to tell their stories and spared others from suffering are heroines," Nixon wrote. "The investigation should continue. We need to get to the bottom of the enormous culture of silence that protects those in power. We must continue to work to end this national epidemic."

Manny Alicandro, a Republican candidate for attorney general who had entered the race hours earlier, told the Associated Press that Schneiderman was "a disgrace and wholly unfit for the role of New York State's chief legal officer. I believe the accusers. He needs to resign his office effective immediately and the New York City Police Department needs to get to work."

An NYPD spokesman said the department had "no complaints on file" related to Schneiderman.

"If the NYPD receives complaints of a crime, it will investigate them thoroughly," the spokesman said.

After the story was published Monday night, Manning Barish tweeted: "After the most difficult month of my life-I spoke up. For my daughter and for all women. I could not remain silent and encourage other women to be brave for me."

In February, Schneiderman filed a civil rights lawsuit against the board of The Weinstein Company and brothers Harvey and Bob Weinstein. Schneiderman alleged that top executives at the film company were aware of Harvey Weinstein’s years of alleged sexual harassment and abuse, but did nothing.

Last month, Schneiderman praised the reporting of the New Yorker and The New York Times in the Weinstein matter, which gave rise to a worldwide conversation about sexual misconduct and accusations against powerful men in media and entertainment.

"Without the reporting of the @nytimes and the @newyorker—and the brave women and men who spoke up about the sexual harassment they endured at the hands of powerful men—there would not be the critical national reckoning underway," Schneiderman tweeted on April 16. "A well-deserved honor."

Schneiderman also has been part of several efforts to push back against some of Trump's actions in the White House, like the rescinding of protection for immigrants brought to the U.S. illegally as children.

Last month, he urged state lawmakers to close a loophole that he said could be used to fight state charges by anyone who has received a federal pardon for similar federal charges.