“I'm thinking about it,” Holder, who ran the Justice Department from 2009 until 2015 under President Obama, told “Late Show” host Stephen Colbert. “What I've said is that I'd make a determination sometime early next year.”

“My focus, really, now, is on 2018, the midterms and trying to make sure that Democrats take back the Senate, take back the House and do well, importantly, at the state level,” he continued.

The former Obama administration official has been hyping up his potential 2020 run since April after he announced his attendance at the New Hampshire Institute of Politics’ annual “Politics & Eggs” event in June, an event that many former candidates once attended.

On the eve of speaking at the event he spoke about his presidential ambitions, saying that “at this point, I’m just thinking about it.”

“I’ll try to decide early next year whether there’s another chapter in my public service career,” he said. “At this point, I’m really focused on the work of the National Democratic Redistricting Committee and trying to deal with this whole question of partisan gerrymandering.”

Holder went on to slam Trump, saying the administration has “tried to use race as a wedge issue to divide the American people” and called it “reprehensible.” 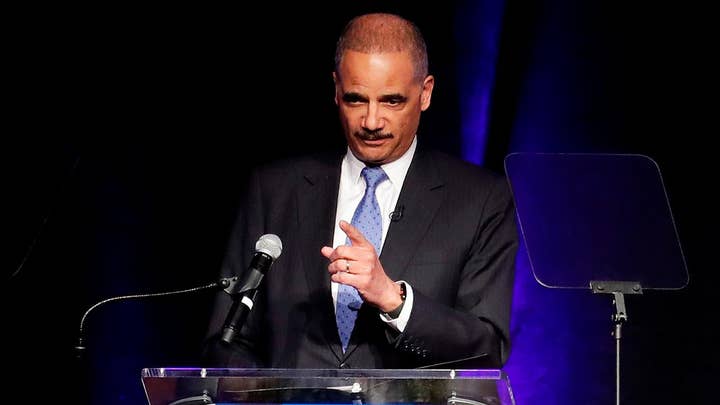 “It is inconsistent with who we say we are as a people and it is not what we expect from somebody who is supposed to be the leader of the entire nation,” he said. “This president has given license to people to say and do things that might not have occurred in the immediate past in our country.”