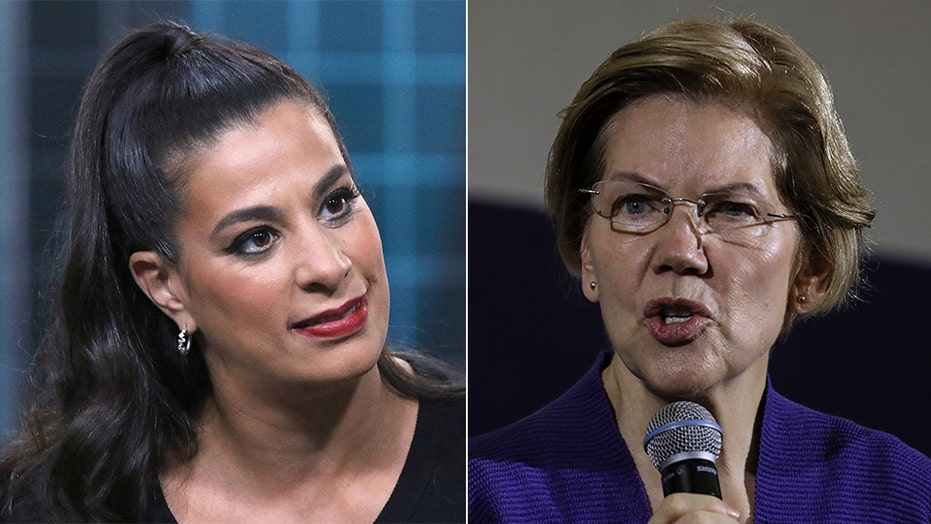 Warren raises less that Buttigieg, Biden in fourth quarter of 2019

Sen. Elizabeth Warren, D-Mass., unveiled a new endorsement this week from comedian Maysoon Zayid, who has been a repeated critic of Israel and also of the White House hopeful herself -- even calling Warren a "weasel" at one point.

Warren touted the support of Zayid on Twitter on Thursday, the same day she launched a new plan to help people with disabilities. Zayid, who founded a charity to help Palestinian children with disabilities, praised Warren’s plan to bring dignity to the disabled and declared "I am all in" for Warren.

“Thank you,” Warren tweeted back at Zayid. “Together, we’ll fight for economic security, equal opportunity, and inclusion for all."

Despite the new endorsement, Zayid has bashed Warren in the past.

In 2017, she called Warren a weasel, admitting she loathed the Massachusetts senator. Then in 2018, Zayid encouraged her followers to vote against her.

Shortly after this article posted, Zayid tweeted out remorse for her past name-calling of Warren and said she was acting like a "brat" at the time.

"I disagreed with her vote and resorted to shameful name-calling like a brat," Zayid said Saturday. "I agree with her policies and have no doubt she will make a great [president]."

Zayid, a Muslim and Palestinian American, has also used her social media to rail against Israel and once questioned a Jewish congresswoman's “loyalties.”

“Is [Rep. Debbie Wasserman Schultz] purposely trying to sink DNC because her loyalties lie with Israel 1st and she knows the GOP is better for the occupation?” Zayid tweeted in 2015 when Wasserman Schultz was chair of the Democratic National Committee.

Fellow Rep. Ilhan Omar, D-Minn, was widely accused by critics of spewing anti-Semitic tropes when she said Jews and Israel backers have “allegiance to a foreign country” -- comments that weren’t as overt as Zayid’s.

And President Trump has gotten into hot water for referring to Jews who vote for Democrats as “disloyal” to Israel.

Zayid tweeted in 2016 to curb the "anti-Semitism and misogyny" when tweeting about the "corrupt" Wasserman Schultz.

Zayid also said that Israel “hunts” Palestinians, compared Israel to Saudi Arabia, calling it a theocracy, and accused Israel of wanting to “steal” Palestinian land “to make a garbage dump for their illegal supremacist settlers!”

Warren has gotten into trouble in the past for not fully vetting her endorsements.

In December, Warren’s campaign raised eyebrows after announcing that Ed Buck, an accused sexual predator and former megadonor for the Democrats, was among hundreds of Obama-era figures who endorsed her candidacy. Her campaign later called it a “mistake.”

Also last month, Warren promoted the endorsement of Iowan John Dabeet who has called pro-Israel politicians "puppets" and heads an extreme anti-Israel organization that has praised deceased Palestinian leader Yasser Arafat as the “immortal leader,” according to the Washington Free Beacon.

Zayid has gained fame for her stand-up comedy work where she makes light of her shakes from cerebral palsy -- a result of her mother’s botched C-section that suffocated her.

“If there was an Oppression Olympics, I would win the gold medal,” she quipped in a viral TED talk. “I’m Palestinian, Muslim, I’m female, I’m disabled, and I live in New Jersey.”

She’s written about how she’s battled accusations of anti-Semitism and insists her beef is not with Judaism but with the politics of the Israeli government.

In a Daily Beast opinion article, Zayid said Israel “is guilty of blurring the line between nationality and faith.”

“They hijacked the Star of David for their flag, which was bound to cause some confusion,” she wrote in 2017. "Right now, one of the biggest sticking points in the never-ending peace process is Israel’s insistence that Palestinians recognize it as a Jewish state. By demanding that Jews have a superior status to Palestinians and undivided control over Jerusalem, the government is absolutely fanning the flames.”