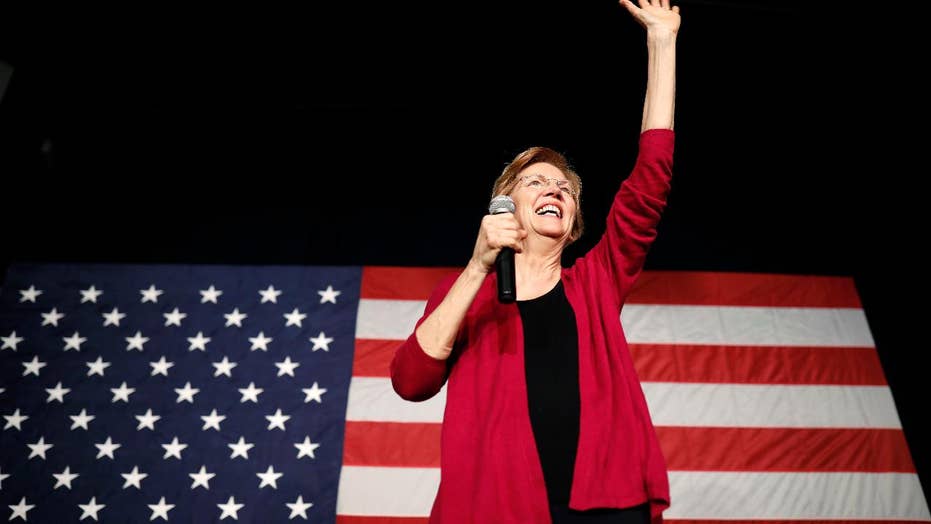 MANCHESTER, New Hampshire – Sen. Elizabeth Warren emphasized her populist platform and highlighted her humble beginnings as she made her first campaign stop in New Hampshire – the state that traditionally holds the first primary of the presidential election season.

Warren, who was re-elected in November to a second term in the Senate, argued that “we need to make systemic change in this country, real change.”

Warren’s visit was her first to the state since launching a presidential exploratory committee nearly two weeks ago.

Presidential candidates from neighboring Massachusetts have a history of winning the first-in-the-nation primary. Think Michael Dukakis in 1988, Paul Tsongas in 1992, John Kerry in 2004, and Mitt Romney in 2012.

But asked in an interview with Fox News if New Hampshire was a must-win state, Warren wouldn’t directly answer.

Instead she said:  “I know there are a lot of folks who have their thoughts on strategies and how all of this is supposed to work. But I am not a professional politician. My first time ever to be in electoral politics was when I first ran for the Senate exactly one term ago."

Another progressive firebrand, independent Sen. Bernie Sanders of Vermont, is seriously mulling a second straight White House bid. Sanders crushed Hillary Clinton in the 2016 Democratic primary in New Hampshire, launching him into a marathon fight with the eventual nominee.

“I’ve known Bernie since long before I got involved in electoral politics,” Warren said when asked how she could compete against Sanders if he launches a campaign. “Bernie and I are old friends and we’ve talked about a lot of the same issues for a long, long, time.”

Warren’s trip to New Hampshire came the day after another progressive lawmaker – Congresswoman Tulsi Gabbard of Hawaii – announced her candidacy for president. Other liberal lawmakers – such as Sens. Sherrod Brown of Ohio and Jeff Merkley of Oregon – are also making moves toward running.

But Warren wasn’t worried about the competition, saying “I think this is great.

She later told reporters “it’s exciting that Democrats have so many ideas and so many people who want to get out and talk about them.”

She touted that “I have the biggest anti-corruption proposal since Watergate.”

And taking a shot at Republican President Trump without naming him, she called for making “everyone who runs for public federal office put their tax returns online, everyone.”

Trump, both as a candidate and as president, has repeatedly refused to release any of his federal income tax returns.

Warren also highlighted her push to build 3.2 million housing units across the country, called for legalizing marijuana, repairing the criminal justice system, and she received one of her biggest applause when she touted “I believe in science.”

“Climate change is real. We have a moral and economic responsibility in this country starting right now,” she added.

And taking another indirect shot at the President, she argued that “we need a strong EPA led by someone who believes in science.”

Asked later why she didn’t directly mention the president, Warren explained that “I think we need to talk about our affirmative version.”

But she added that “I’m willing to fight. Everybody knows that.”

Warren also spotlighted her working-class upbringing in Oklahoma, saying “it was a bumpy path for me. I dropped out of school at 19, got married.”

She explained that “for those who think I was born at Harvard (University), in fact I went to the state law school of New Jersey, Rutgers, for $450 a semester.”

Asked why she emphasized her early life over her ensuring years at Harvard or in the Senate, Warren said “I think people want to know how you started and I was born and raised in Oklahoma. It’s a part of my story and always will be.”

After her event in Manchester, Warren headlined a jam-packed house party in Concord at the home of former New Hampshire Senate president Sylvia Larsen.

Warren’s visit to the Granite State came days after a bill in the New Hampshire legislature to change the name of Columbus Day to indigenous people’s day received its first committee hearing.

Warren – whose autumn announcement detailing her Native American heritage was panned by many political pundits and conservatives – is a supporter of the name change.