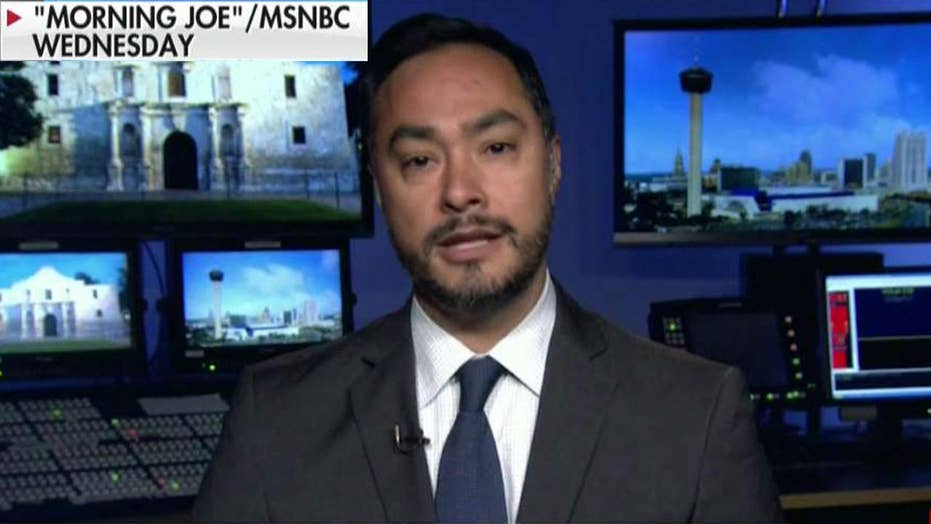 First he drew the ire of Twitter and Republican lawmakers when he released the names and employers of Trump donors in Texas; now Rep. Joaquin Castro, D-Texas, has been hit with an official Federal Election Commission (FEC) complaint over the controversial action.

“By exposing Trump donors — and one of his own as well — to bullying and intimidation, Castro broke the law, and it’s high time we hold him accountable for his despicable, cowardly actions,” Backer said.

"No one was targeted or harassed in my post. You know that. All that info is routinely published."

Also included in the alleged violation is a precedent set by a 1989 court case that grants regular citizens “practical obscurity,” even though their donations are a matter of public record.

It's alleged that by exposing their employers, though not their addresses or contact information, Castro put the donors at risk for harassment and violence by the “radical left.”

Castro, the brother of 2020 Democratic nominee for president Julián Castro, has been a member of Congress since 2013. After he posted the names and employers of 44 Trump donors, which coincidentally included one of his own, he drew widespread condemnation from Republicans.

“No one was targeted or harassed in my post. You know that. All that info is routinely published,” Castro said on Twitter in response to Rep. Kevin McCarthy’s criticism. Castro then pivoted to condemn the president’s rhetoric, which was mirrored in the manifesto of a white nationalist mass shooter in El Paso. He killed 22 in a rampage at a Walmart last week.

Castro released the donors’ information in the wake of two mass shootings in El Paso and Dayton, Ohio. He reasoned on Twitter that “Trump spends donor money on thousands of ads about Hispanics ‘invading’ America.”

His congressional office did not reply to requests for comment by the time this article was published.

“He did this to shame the people and cause them some form of harm for participating in the political system."

Backer, who runs the conservative free speech nonprofit the Coolidge-Reagan Foundation, said political donations have been upheld consistently by courts as one of the most protected forms of speech.

“He did this to shame the people and cause them some form of harm for participating in the political system,” Backer said.

In recent months, he filed an FEC complaint against Rep. Alexandria Ocasio-Cortez, D-N.Y., for alleged campaign finance violations committed by her and her former chief of staff, Saikat Chakrabarti. The case has yet to be resolved.

In an interview with Fox News, Backer made no bones about the publicity and outcome he hopes will come from the complaint. He said his foundation will be using the Castro complaint to education and raise awareness on free speech issues, and he hopes the FEC “throws the book” at the Texas congressman.

“It is an incredibly dangerous precedent, I am shocked by this,” Backer said. “… There is a reason this is frowned upon, because it violates our social norms and good sense.”

In addition to the action by Backer, seven House Republicans led by Rep. Andy Biggs, R-Ariz., sent a letter Friday to the House Ethics Committee asking the panel to look into Castro’s conduct.

The Republicans wrote to Chairman Ted Deutch, D-Fla., and Ranking Member Kenny Marchant, R-Texas, saying that Castro “sought to encourage harassment against those citizens simply on the basis of their political beliefs.”

“Whether he intended to provoke physical violence or merely verbal harassment, his intent was to chill the free speech and free association rights of Americans,” the letter said. “This behavior cannot be tolerated by a member of this institution.”