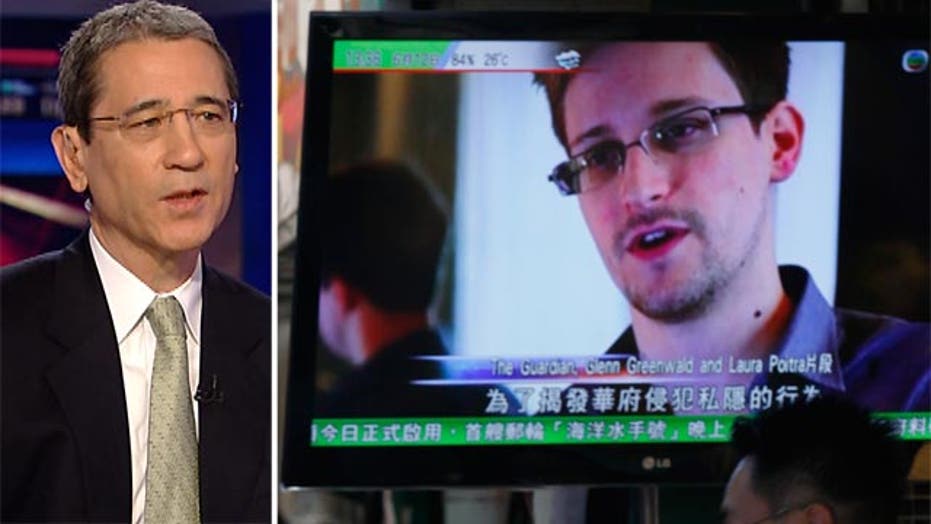 Editorial: Information may be used to 'negotiate' with US

While some initially championed Edward Snowden, the 21st century mole holed up in Hong Kong, as a martyr, there also appears to be a growing backlash against the former NSA contractor. And as the story slowly unfolds, one key question stands out: is Snowden the heroic whistleblower he claims to be or something more sinister?

During one of his first newspaper interviews, when he spilled national security secrets, Snowden called himself “just another guy who sits there day to day in the office.” But now some are questioning his motives and wondering whether claims that he wanted to right a perceived wrong are true -- or whether he could be a modern-day double agent, cleverly hiding his actions and painting himself as a victim of the U.S. government while working as an agent for the Chinese.

Gordon Chang, author of “The Coming Collapse of China,” thinks there’s a strong possibility Snowden could be playing for both sides.

“The first clue is that he goes to Hong Kong and they have an extradition agreement with the U.S. and a tradition of close cooperation of law enforcement,” Chang told Fox. “That means, the only thing that stands between him and a lifetime in a super-max prison is Beijing.”

Chang also says the timing of Snowden’s disclosures are suspect.

“He changed the global narrative of China hacking into the U.S. to the American government going after one of its own,” Chang said.

“That really derailed Obama’s whole talk about cyber security,” he said, adding, “the most rrecent revelations have been about operational details of the NSA spying on Hong Kong and China. This only helps Beijing.”

Chang says it’s likely Snowden went public with his claims because he was tipped off that the NSA was on to him.

Snowden’s most recent claims to the South China Morning Post are that the NSA has more than 61,000 hacking operations globally, the NSA has been hacking computers in Hong Kong and China since 2009 and that the Chinese targets included universities, public officials, businesses and students.

Chang said that if Snowden flees to China "“basically that puts him in a place where U.S. authorities can’t get to him and that’s important because it lets him pretty much do what he wants. And perhaps the issue is that he wasn’t on his own. That he did this with the help of someone else.”

Chang believes that it would be very difficult for Snowden to get the amount of data he got in such a short period of time and from a position where most people didn’t think it would be possible.
Chang also says the time Snowden spent in Hawaii could  provide clues as to his true intentions.

“There are a lot of federal agencies in Hawaii where he was and this is a very critical place  because this is where we do our surveillance of China,” he said.

For now, what is clear is that there are many more questions that need to be asked and answered.

Here’s what we do know:  Snowden was a contractor who allegedly looked at documents he wasn’t supposed to see, took them, fled to another country and is now claiming he did so because he was trying to bring an injustice to light.

"The national security of the United States has been damaged as a result those leaks," he said.. "The safety of the American people and the safety of people who reside in allied nations have been put at risk as a result of these leaks," Holder said. "We are presently in the process of that investigation, and I'm confident the person who is responsible will be held accountable."

The attorney general made the comment in Dublin, Ireland, when asked by reporters why the U.S.  hasn't taken steps to arrest Snowden.

Snowden’s background isn’t squeaky clean. During the eight years that he worked as a contractor for the Central Intelligence Agency and NSA, he routinely went online and ranted against corporations and citizen surveillance.

Records show that Snowden was employed by an unidentified classified agency in Washington from 2005 to mid-2006, by the CIA from 2006 to 2009, when he primarily worked overseas, and by Dell Inc from 2009 to 2013, when he worked in the U.S. and Japan as an NSA contractor. During those years, he posted hundreds of messages on a public Internet forum under a pseudonym.

"I can't hope to change the way things are going by overtly complaining, writing letters, or blowing things up," Snowden wrote in 2003 in response to a discussion about corporate greed on the Ars Technica online forum.

The new information released by Reuters and Time Magazine about Snowden’s employment record, online postings and education come during a time when U.S. lawmakers are demanding answers from intelligence officials on how Snowden, a high-school dropout, got his hands on the country’s top secret programs.

Snowden, 29, fled to Hong Kong with a batch of classified material he allegedly stole from the NSA. The former Booz Allen Hamilton contractor initially said it was his conscience that drove him to expose the “massive surveillance machine the U.S. government is secretly building.”

On Friday, The Global Times, a Communist Party-backed newspaper in China, ran an editorial in both its Chinese and English-language editions that argued Snowden should not be sent back to the U.S. because his revelations about American surveillance programs concern China’s national interest. The paper also cited Beijing's rocky relations with the U.S. and says the Chinese would be unhappy if Snowden were sent back.

The editorial also argued that Snowden could provide Chinese officials with once-classified U.S. intelligence, which would help the country update its understanding of cyberspace.

Richard Haass, president of the Council on Foreign Relations recently tweeted, “Why is the media using sympathetic word ‘whistleblower’ for Edward #Snowden, who leaked secret #NSA program? He broke the law & made us less safe.”

He added, “A ‘whistleblower’ is person who reveals wrongdoing, corruption, illegal activity. None of this applies here even if you oppose US (government) policy.”