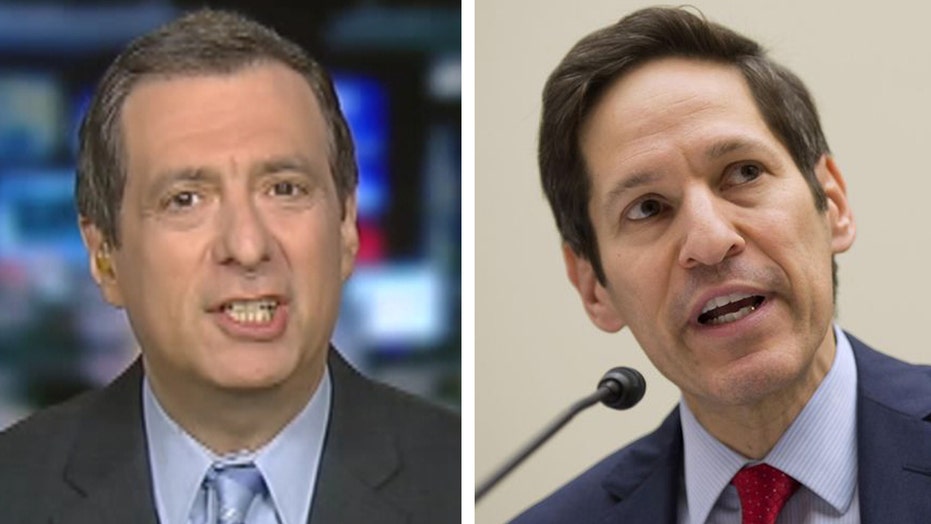 There’s a growing media drumbeat on how to fix the Ebola crisis.

Yes, if the head of the Centers for Disease Control would just step down, maybe we can get this thing licked.

Just the way the Secret Service miraculously boosted security once Julia Pierson was shoved out. And the VA’s myriad problems magically disappeared after Eric Shinseki was forced out.

I’m not a big defender of Frieden. He seems rather robotic at his televised briefings, rattling off numbered talking points. He doesn’t project a lot of empathy. And he’s only grudgingly admitted that his agency has made several crucial mistakes in handling the response to the virus and those who have been infected.

At a House hearing yesterday, Frieden, an experienced physician and public health official, used the same bedside manner, quietly intoning “we will consider all options” when pressed on why the administration isn’t imposing more travel restrictions. As in his TV interviews, he doesn’t seem to know how to make news or communicate a sense of urgency.

But this seems to me to be the classic media response to a crisis, reducing it to a question of which heads should roll.

I’m all for political accountability: Government officials who do a lousy job should be sent packing. And sometimes they should be sacked for reasons of political symbolism. But does anyone really believe that turning CDC over to an acting director will quickly boost the agency’s performance?

Bill O’Reilly has demanded that Frieden be fired, calling him the “chief propagandist” for the “dumb and dangerous” approach of expecting airport screening to be able to keep infected people out of the United States.

But other prominent voices at Fox aren't buying O'Reilly's argument. Greta Van Susteren said, "I disagree totally with him. I think Dr. Frieden has done a good job and I want him to continue to lead this. ... I think Bill O'Reilly is dead wrong on this one."

“After helming an agency that similarly proved ill-prepared to meet its most important mission, Frieden shouldn't force the resignation issue like Shinseki did…At times, he’s seemed completely out of touch…

“Frieden is clearly a good man and will go on to do good things. But the President must now choose someone better attuned to the crisis leadership role that has overtaken the rest of the CDC director's job description.”

“I am more convinced than ever that CDC director, Dr. Tom Frieden is not the right person for the job. And I say this because this latest press conference consisted of him telling a room of reporters what anyone who has ever dealt with Ebola in the past should have known…

“Frieden showed up late to the game again on Ebola, which is not acceptable when lives are at stake.”

Frieden isn’t the only one whose butt is on the line. There’s also the president of the United States.

Obama, who had been allowing Frieden to be the face of the crisis, did his own briefing on Ebola the other day. And he took the rare step of canceling two days of fundraising.

“Optics, which Obama and his staff dismiss as never being much on their minds, always means a lot to this White House,” Politico says. “Aides in the past have pointed out that any abrupt changes to Obama’s schedule have the potential to convey more of a crisis than may exist.

“But facing the risk of embarrassing juxtapositions of dying health care workers while Obama was out campaigning, that’s exactly what they did.”

Obama probably could handle this from the road, but politically he had little choice. He doesn’t need any more golfing-style controversies.

The media’s increasingly partisan approach to the Ebola outbreak is reflected in the public as well.

“According to a new ABC News/Washington Post survey, only 54 percent of Republicans are confident in the federal government’s ability to respond effectively to Ebola — far fewer than the 76 percent of Democrats who expressed confidence. This finding represents a striking reversal from the partisan divide found in a question about a potential avian influenza outbreak in 2006, when a Republican, George W. Bush, was president. An ABC/Post poll taken at the time found that 72 percent of Republicans were confident in an effective federal response compared with only 52 percent of Democrats.”

No discussion of the media’s Ebola coverage would be complete without looking at Shep Smith’s role. The veteran Fox News anchor challenged his own profession to stop scaring people:

“Do not listen to the hysterical voices on the radio or the television or read the fear-provoking words online. The people who say and write hysterical things are being very irresponsible.”

“Suggestions have been made publicly that leaders and medical professionals may be lying to us. Those suggestions are completely without basis in fact.  There is no evidence of any kind of which we at Fox News are aware that leaders have lied about anything regarding Ebola. I report to  you with certainty this afternoon that being afraid at all is the wrong thing to do.”

We don’t have an outbreak, we have two sick people from one dying man. And the rest of this should stop, because it’s not productive. And it’s not worth ratings and it’s not worth politics and we all need to stop it.”

That’s a powerful message. Most journalists are trying to cover the story responsibly, but the combined noise level has grown deafening. Will the media listen?