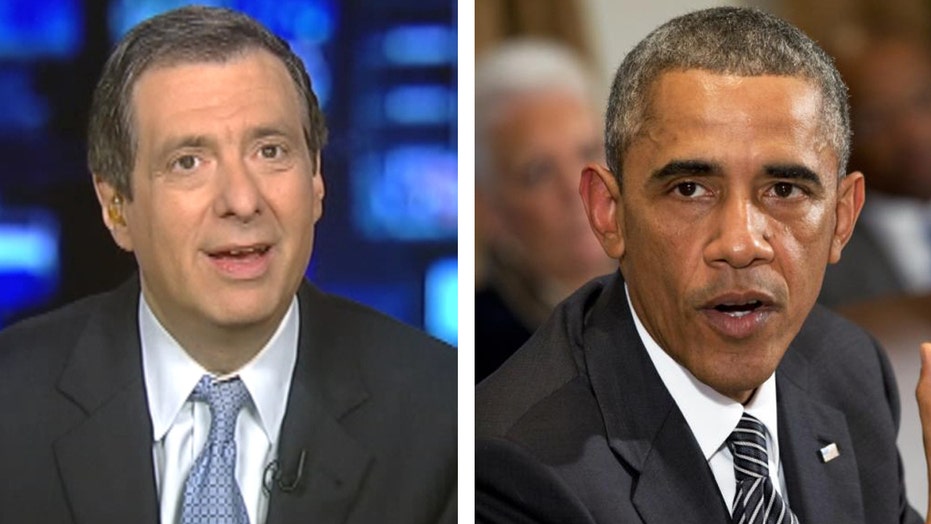 Kurtz: Why Obama caved on an 'Ebola czar'

The media wanted an Ebola czar, and got their way.

Now what? There are a growing number of media voices calling for a ban on travel from West Africa, and I believe they'll soon get their wish.

The White House has shifted into high gear on the Ebola crisis, and that means having the president appear on camera more regularly (not to mention having word leaked to the New York Times that he's angry at his staff). It also means having him shift some of his positions in response to the storm of criticism.

When Obama spoke to reporters on Thursday night, he hinted that the administration’s opposition to a czar was crumbling. “It may make sense for us to have one person,” he said.

In fact, the president undoubtedly had already made up his mind, because word leaked the next morning that he had tapped Ron Klain for the czarship. White House officials said Klain wasn’t asked to take the job until that morning, but he'd been sounded out. What's more, the quick turnaround makes clear that Obama was ready to go. He just wasn’t ready to announce it the previous evening.

The president sent a similar signal when he said “I don’t have a philosophical objection necessarily to a travel ban if that is the thing that is going to keep the American people safe.” That is the sound of a politician retreating, laying the groundwork for another reversal. Sure, Obama added that experts had told him a travel ban would be “less effective” than screening, but he clearly left himself the option.

And with the midterms just two weeks away and more Republicans demanding a travel ban, I’d be surprised if the president doesn’t yield on that point as well. Keep in mind that, according to an ABC/Washington Post poll, 67 percent of the public supports a travel ban.

Unfortunately, the question of race has seeped into that debate. Some commentators on the left implying it’s racist to oppose a travel ban from countries like Liberia, a few on the right saying  Obama won’t ban travel because of his affinity for Africa. They’re throwing kerosene on the fire. Just stop it. This is about saving lives. And 14 other African countries have adopted their own travel bans.

So what does hiring a czar accomplish? This has become a Washington ritual since FDR. The Nixon-Ford administration was naming energy czars. Since then we’ve had drug czars, a car czar and a green jobs czar. The conceit is that they will magically take charge, vanquish an unwieldy bureaucracy and solve the crisis at hand.

There’s been a lot of chatter about the fact that Klain is no medical expert. Well, the administration already has plenty of doctors working on the problem. Klain is an experienced Washington lawyer who was chief of staff to both Joe Biden and Al Gore, managed the 2000 recount for Gore, and did debate prep with Obama. He was even played by Kevin Spacey in HBO's "Recount." But it will be difficult for him to channel his inner Frank Underwood, since he doesn't even report directly to the president.

While it makes sense to have one seasoned insider focused solely on Ebola, it would be foolish to expect miracles.

Still, the media love czars because it puts a face on the problem, and we can then report in more personal terms whether that anointed person is winning or losing the battle.

The administration has two goals: It has to minimize the number of future Ebola cases, and politically it has to be viewed as staying on top of the problem. Klain can probably help with the latter, but with the former there are some factors beyond our control, and a CDC that so far has made missteps and miscalculations.

I’ve been vocal about the overheated nature of the media coverage—I mean, live video of the car carrying the nurse to the airport to be flown to NIH?—but perhaps it’s had one positive result. Media pressure played a role in prompting the White House to adjust its tactics. Now that challenge is to chronicle the battle in the trenches without suggesting that America is already facing an epidemic.