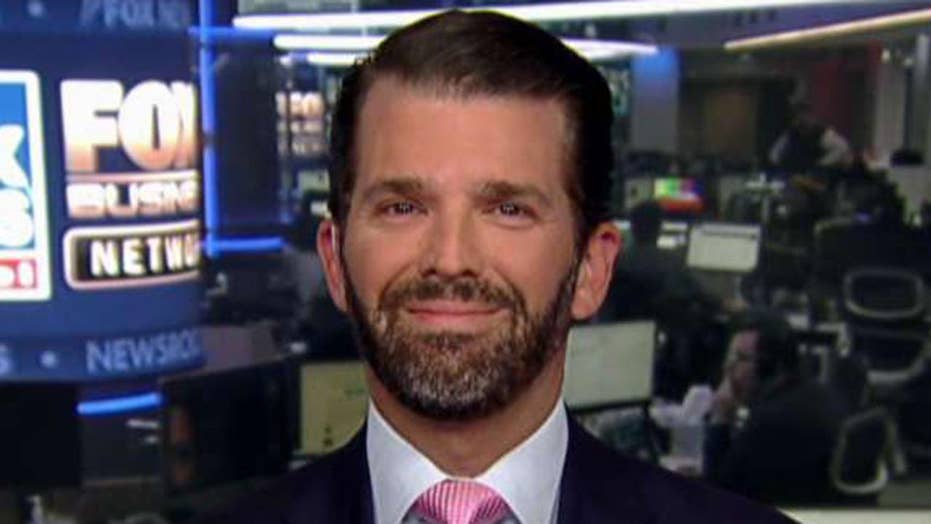 Donald Trump Jr., in an exclusive interview Monday night with Fox News' "The Ingraham Angle," accused House Intelligence Committee Chair Adam Schiff of orchestrating a series of inaccurate leaks aiming to damage the White House, saying there is a "99.9 percent chance he's the guy that was leaking my testimony as I was testifying" in 2017.

"You had some Catholic schoolboys that were at a right-to-life march, okay? They were wearing a MAGA hat," Trump Jr. said. "They had to pounce because the media wants that to be true. They want a bunch of nice, Catholic kids -- happen to be white -- they want them to be the enemy."

Many liberal and conservative commentators criticized the students -- and, in some cases, called for them to be personally harassed and their school closed -- based on initial, incomplete videos of the encounter,  only to walk back their comments after a fuller video showed that the students themselves had been harassed, and that the students did not appear to approach the Native American man or the activists at any point.

Why was the Covington students video a tempting narrative for the media?

Media rush to judgement on Naive American's standoff with Catholic teens; reaction from co-founding editor of The Intercept Glenn Greenwald.

And after the BuzzFeed article was published, some commentators and top Democrats said it raised the possibility the president should be impeached if it were accurate.

"They need it to be true, Laura," Trump Jr. added. "They've been pushing this nonsense for two years. They've found nothing. ... If you're not sure it's true, don't push it for 14 hours straight."

He continued: "This isn't the first time that happened. You saw it right after I did my testimony, and they said, 'Oh, Donald Trump Jr. had the Wikileaks information,' because presumably, Adam Schiff leaked it right after my testimony to them, and conveniently took out the one before the four, turning the 14th into the 4th, meaning I had it six days before the world saw it, as opposed to four days after the entire world saw it."

In late 2017, CNN senior congressional correspondent Manu Raju reported that Trump Jr. had received early, private access to Wikileaks documents -- a story that turned out to be entirely false.

BuzzFeed News has come under fire for its sourcing and reliability, after its bombshell report Thursday purporting to demonstrate that President Trump directed Michael Cohen to lie to Congress was denied in an unusual statement from Special Counsel Robert Mueller's office. (REUTERS/Brendan McDermid)

Trump Jr. has previously accused Schiff, D-Calif., of leaking details about his closed-door testimony before the Senate Intelligence Committee. In response, a Schiff spokesman asserted that Schiff and his staff "do not leak classified or confidential information. ... [But] we do not permit witnesses to represent publicly that they are fully cooperating with our committee and privately refuse to answer questions pertinent to our investigation on the basis of meritless claims of privilege."

Trump Jr.'s longstanding allegations that the media uses unreliable leaks to treat the White House unfairly were thrust into the spotlight again this week, after BuzzFeed News investigative reporters Anthony Cormier and Jason Leopold authored their bombshell, since-discredited report on Thursday. (Schiff, on Sunday, vowed to launch a probe into the substance of the story.)

The article cited two law enforcement officials who said Michael Cohen had acknowledged to Special Counsel Mueller’s office that President Trump told him to lie to Congress about a potential real-estate deal in Moscow, and to claim that the negotiations ended months before they did so as to conceal Trump’s involvement.

"They've been pushing this nonsense for two years. They've found nothing."

The article claimed that "internal company emails, text messages, and a cache of other documents" confirmed Trump's instruction to Cohen. But Mueller issued his first public statement in more than a year to repudiate the BuzzFeed report just one day later, asserting in a brief statement that the story's key elements were "not accurate."

The Washington Post has since reported that Mueller intended his rare denial to mean that the story was "almost entirely incorrect," and that the special counsel's office immediately "reviewed evidence to determine if there were any documents or witness interviews like those described, reaching out to those they thought might have a stake in the case. They found none."

And Trump attorney Rudy Giuliani told Fox News on Monday that his team communicated with Mueller's office last week about the BuzzFeed article -- and agreed a significant portion of it was false.

"There are no texts and emails or other documents to corroborate BuzzFeed's claim for the simple reason that it is not true," Giuliani told Fox News. "Whoever is responsible for this is lying." He added: "We commend them for standing up for the truth," referring to Mueller’s team.

Leopold has been involved in numerous scandals during his career related to his false reports, including one in 2002 for Salon.com about Enron that the outlet said was "riddled with inaccuracies and misrepresentations," and another incorrect story in 2006 for Truthout.org about supposedly pending indictments against former George W. Bush aide Karl Rove.

In an interview with CNN on Sunday, Cormier declined to explain why Leopold had claimed to have seen the documents proving that Trump had ordered Cohen to lie to Congress -- contradicting Cormier's insistence in a separate post-article interview on Friday that he had not personally seen the documents.

"We can't get into, like, the details there," Cormier, sitting next to BuzzFeed News Editor-in-Chief Ben Smith, told CNN's "Reliable Sources" host Brian Stelter. "We really can't go any further at all, in order not to jeopardize our sources."

Leopold did not appear for the interview, which occasionally became tense as Stelter openly criticized BuzzFeed's journalistic practices. Smith claimed Leopold, who has been out of the public view since Friday, was busy "reporting."

In an interview on Friday, Cormier told CNN, “No, I’ve not seen it personally,” when asked if he had seen the documents mentioned in the story that purportedly showed Trump told Cohen to lie.

Cormier only claimed that the two sources he cited were “fully, 100 percent read-in to that aspect of the special counsel’s investigation.”

However, Leopold, speaking separately to MSNBC, remarked that, "I don’t think we’ve said we haven’t seen [the documents]" and clarified, "I’ll say we’ve seen documents and been briefed."

Cormier added in the interview with Stelter on Sunday: "I have further confirmation that this is right. We are being told to stand our ground … The same sources that we used in that story are standing behind it, as are we.”

But Smith and Cormier also acknowledged they were not aware of the precise language Trump would have used in instructing Cohen to lie. Stelter, in the interview, also slammed Leopold's terse request for comment to Mueller's office, sent just hours before the article was published, as a "dereliction of duty" by the publication.

President Trump has called BuzzFeed's decision to publish the discredited article "disgraceful," and Vice President Mike Pence charged on Sunday that the media was "obsessed" with taking down Trump.

"It was remarkable what we saw happening for 24 hours in the media, on the basis of the report that appeared in BuzzFeed," Pence told "Fox News Sunday" anchor Chris Wallace. "It's one of the reasons why people are so frustrated with many in the national media."