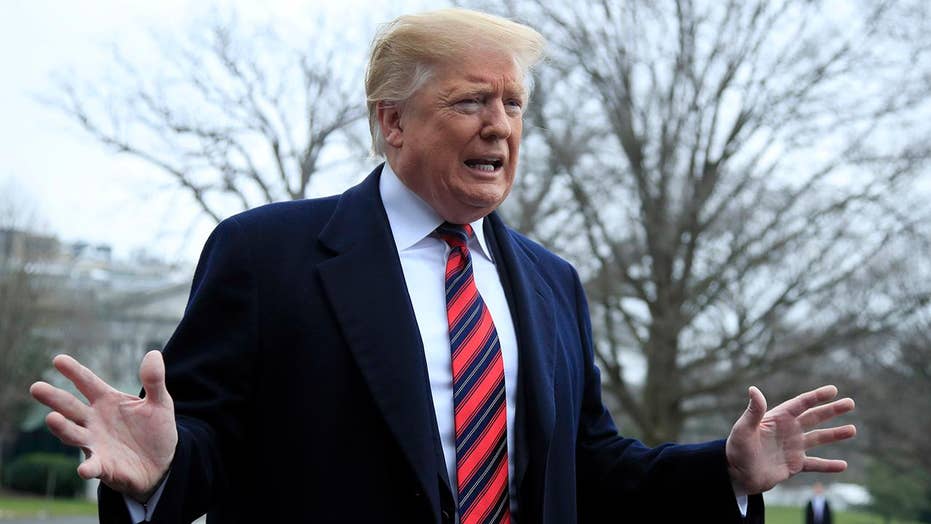 Mueller challenges allegation that the president urged perjury after media touted claim that he told Cohen to lie.

BuzzFeed News investigative reporter Anthony Cormier on Sunday declined to explain why his colleague Jason Leopold claimed to have seen documents proving that President Trump had ordered his former lawyer Michael Cohen to lie to Congress -- contradicting Cormier's insistence that he had not personally seen the documents.

"We can't get into, like, the details there," Cormier, sitting next to BuzzFeed News Editor-in-Chief Ben Smith, told CNN's "Reliable Sources" host Brian Stelter. "We really can't go any further at all, in order not to jeopardize our sources."

Leopold did not appear for the interview, which occassionally became tense as Stelter openly criticized BuzzFeed's journalistic practices. Smith claimed Leopold, who has been out of the public view since Friday, was busy "reporting."

Leopold has been involved in numerous scandals during his career related to his false reports, including one in 2002 for Salon.com about Enron that the outlet said was "riddled with inaccuracies and misrepresentations," and another incorrect story in 2006 for Truthout.org about supposedly pending indictments against former George W. Bush aide Karl Rove.

Cormier and Leopold authored a bombshell, discredited report on Thursday, citing two law enforcement officials who said Cohen acknowledged to Special Counsel Mueller’s office that Trump told him to lie to Congress about a potential real-estate deal in Moscow, and claim that the negotiations ended months before they did so as to conceal Trump’s involvement.

The article, which prompted Democrats to call for Trump's impeachment if it turned out to be true, said that Cohen’s testimony “marks a significant new frontier: It is the first known example of Trump explicitly telling a subordinate to lie directly about his own dealings with Russia.”

But Mueller issued his first public statement in more than a year to repudiate the BuzzFeed report the next day, flatly asserting that BuzzFeed's story was "not accurate." The Washington Post has since reported that Mueller intended his rare denial to mean that the story was "almost entirely incorrect," and that the special counsel's office immediately "reviewed evidence to determine if there were any documents or witness interviews like those described, reaching out to those they thought might have a stake in the case. They found none."

In an interview on Friday, Cormier told CNN, “No, I’ve not seen it personally,” when asked if he had seen the documents mentioned in the story -- including "internal company emails, text messages, and a cache of other documents" -- that purportedly showed Trump told Cohen to lie.

Cormier only claimed that the two sources he cited were “fully, 100 percent read-in to that aspect of the special counsel’s investigation.”

However, Leopold, speaking separately to MSNBC, remarked that, "I don’t think we’ve said we haven’t seen [the documents]" and clarified, "I’ll say we’ve seen documents and been briefed."

BuzzFeed has not identified the documents, and has said only that it stands by its reporting, without offering additional details.

"As we’ve re-confirmed our reporting, we’ve seen no indication that any specific aspect of our story is inaccurate. We remain confident in what we’ve reported, and will share more as we are able," BuzzFeed said in a statement.

Cormier added in the interview with Stelter on Sunday: "I have further confirmation that this is right. We are being told to stand our ground … The same sources that we used in that story are standing behind it, as are we.”

Bizarrely, Smith and Cormier also acknowledged they were not aware of the precise language Trump would have used in instructing Cohen to lie.

"We are eager to understand which characterizations Mueller is talking about there, and obviously we take that incredibly seriously,” Smith added.

Cormier also suggested he should not be fired for authoring the discredited report, because he has worked in the news industry for more than 20 years and built up substantial "skills" that help him divine accurate information from misleading sources.

"The same fundamentals that I learned covering city hall, covering the police, covering court houses — that stands today. I use those same skills, the same rigor to cover the White House. This is going to be borne out. This story is accurate,” Cormier said.

At one point in the interview, Stelter lit into Leopold's brief request for comment to Special Counsel Robert Mueller's team just hours before the story was published. "But come on, one paragraph?” Stelter asked Smith. “That’s a dereliction of duty, to send a three-sentence email."

Leopold wrote to the special counsel's spokesman Thursday afternoon: "Peter, Hope all is well. Anthony and I have a story coming stating that Michael Cohen was directed by President Trump himself to lie to Congress about his negotiations related to the Trump Moscow project. Assume no comment from you but just wanted to check. Best, Jason."

Mueller's team, according to The Washington Post, has since suggested it would have offered more than a simple "no comment" if Leopold had outlined more details in his request for comment about the allegation that Trump had instructed Cohen to lie.

Smith countered that Mueller's team had not been forthcoming. "He could have said, 'That's quite a statement. Tell me more," Smith said.

But Stelter pushed back by arguing that wasn't Mueller's responsibility.

Speaking to "Fox News Sunday," Vice President Pence decried the "obsession of many in the national media to attack this president for any reason, for any allegation" and asserted that the problem was bigger than BuzzFeed.

"It was remarkable what we saw happening for 24 hours in the media, on the basis of the report that appeared in BuzzFeed," Pence told anchor Chris Wallace. "It's one of the reasons why people are so frustrated with many in the national media."

But, speaking later to "Fox News Sunday," South Carolina Democratic Rep. Jim Clyburn defended Democrats' response to the BuzzFeed report, including some who called for Trump's impeachment if the story proved accurate.

"I don’t think that my Democratic friends are in any way rushing to judgment because they qualified right up front [by saying], 'If this is true,'" Clyburn argued. "When you preface your statement with 'If this is true,' that, to me, gives you all the cover you need."