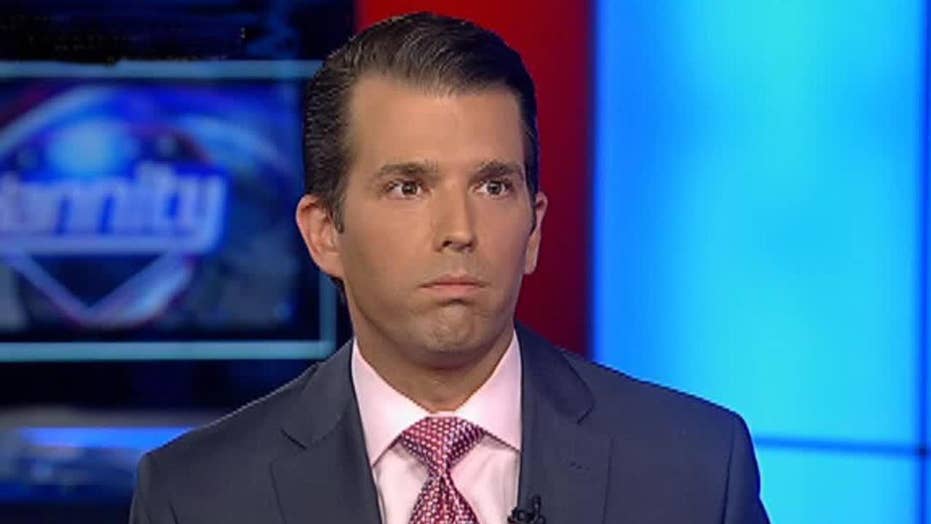 The president's son sits down with Sean Hannity

Donald Trump Jr. said he met with the lawyer in June 2016 who he thought had damaging information about Trump’s opponent, Hillary Clinton. That information was “part of Russia and its government’s support for Mr. Trump,” according to emails pertaining to the meeting that Trump Jr. publicly released.

“The implications of the email thread are serious [and] disturbing,” Amash tweeted. “We deserve answers, not an ever-changing story. If there’s more, tell us now.”

“Campaigns don’t operate this way. Even a political novice would worry about violating campaign finance laws given the context of the emails,” Amash said in an additional tweet.

When asked by a Twitter user about his feelings toward Clinton, Amash said he was also “disturbed about nearly everything she did.”

Multiple lawmakers raised the alarm about Trump Jr.’s meeting – especially after he published the emails that set up the meeting.

Clinton’s former running mate Sen. Tim Kaine, D-Va., said Trump Jr. turned the probe into possible collusion between the Trump campaign and the Kremlin in the 2016 presidential election into a “treason investigation.”

TRUMP JR.: I WOULD HAVE DONE THINGS DIFFERENTLY

Sens. Mark Warner, D-Va., and Susan Collins, R-Maine, have both called for Trump Jr. to appear before the Senate intelligence committee.

Trump Jr. said he would be "happy to work with the committee to pass on" what he knows.

Trump Jr. has also said that the lawyer didn’t have any information on Clinton, but instead wished to discuss a 2012 law that imposes sanctions on certain Russian individuals.

Trump, too, took to Twitter Wednesday morning as he defended his son.

"My son Donald did a good job last night. He was open, transparent and innocent," the president tweeted, referencing his son's interview with Fox News' Sean Hannity. "This is the greatest Witch Hunt in political history. Sad!"