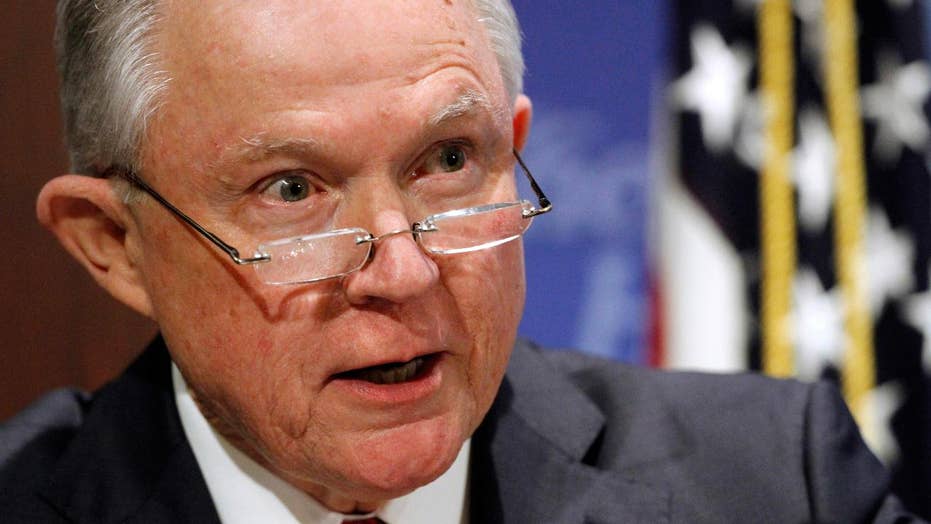 Sessions opens door to special counsel on Uranium One

Panel debates on 'The Story.'

The Justice Department’s scrutiny of an Obama-era deal that gave Russia partial control of the U.S. uranium supply has opened the door to the possibility of a new investigation – egged on by the White House.

“If the attorney general feels there’s a need for that investigation, he should absolutely look into that – and obviously he sees cause for it,” White House Press Secretary Sarah Sanders told reporters on Thursday.

She was reacting to a report that DOJ prosecutors are now pressing FBI agents about a prior probe related to the Uranium One deal which Republican critics have criticized over alleged links to the Clintons. NBC News reported that agents are being asked to explain the evidence they found and whether there was any “improper effort” to stop a prosecution.

It’s all part of a broader effort by the Justice Department, first reported by Fox News, to evaluate GOP calls for the appointment of a second special counsel examining Obama administration-tied controversies. As Fox News reported in November, Attorney General Jeff Sessions directed “senior federal prosecutors” to make recommendations on whether such an appointment is warranted, and whether “any matters not currently under investigation should be opened.”

Sessions told reporters last week that the DOJ is cooperating with congressional investigators on Uranium One and other issues, including by making available a confidential informant. He said a “senior attorney” has been supplied with “the resources he may need” to review cases and make a recommendation.

As for Uranium One, “I think the end game would be if they found something, they certainly would be potentially capable of reopening the investigation and handling it as though it were an active, ongoing criminal matter,” said Thomas Dupree, former Justice Department official under the George W. Bush administration.

It’s unclear at the moment whether Sessions would eventually take the step to either appoint a second special counsel or reopen the probe, amid Republican criticism of Special Counsel Robert Mueller’s investigation into Russian interference in the 2016 election and potential collusion with Trump associates.

Attorney General Jeff Sessions is looking into the Uranium One deal. (AP)

The pressure from Capitol Hill regarding Uranium One isn’t letting up.

Earlier this month, a top Republican senator expanded his own investigation into the sale of the Canadian mining company to a subsidiary of Russia’s Rosatom nuclear company. Sen. John Barrasso, R-Wyo., chairman of the Senate Committee on Environment and Public Works, fired off a letter to the heads of the U.S. Energy Department and U.S. Nuclear Regulatory Commission seeking more information – specifically, on how uranium under the Russian firm's control made its way out of the U.S.

Back in 2011, then-NRC Chairman Gregory Jaczko assured the senator that the companies did not hold a specific “NRC export license” and would not be able to export uranium from the U.S. without one.

Yet The Hill reported last month that while the NRC never issued the license, memos show it did approve “the shipment of yellowcake uranium” from the U.S. mines to Canada in 2012 through a “third party.” The same report said the Obama administration later approved some of that material to go to Europe, “and the approval involved a process with multiple agencies.”

At a recent Senate hearing, NRC Chairwoman Kristine Svinicki committed to responding to the senator, while acknowledging the prior responses he got “have not fully depicted the complexity of this issue.” She said the commission would “depict it in context and more accurately” in the forthcoming response.

The Uranium One deal, which was covered extensively in 2015, burst back into the headlines in October, after The Hill reported the FBI had evidence as early as 2009 that Russian operatives used bribes, kickbacks and other dirty tactics to expand Moscow’s atomic energy footprint in the U.S., related to a Rosatom subsidiary. Republican lawmakers on Capitol Hill quickly started asking questions about how the deal was approved the following year by an inter-agency committee.

Senate Judiciary Committee Chairman Chuck Grassley, R-Iowa, has renewed scrutiny, for instance, of a $500,000 fee Bill Clinton collected from a Russian investment bank for a June 2010 speech. Grassley wrote in an October letter that the bank’s senior officers include former Russian intelligence personnel, and sources had described the company as an “extension” of the Russian government.

“Notably, in the same month as the Clinton speech, Uranium One and Rosatom notified CFIUS of the Russian government’s intent to acquire twenty percent of the United States’ uranium assets. The next month, in July 2010, Renaissance Bank reportedly assigned Uranium One a ‘buy’ rating, a move that would principally benefit its Russian investors,” Grassley wrote. “The donations raise concerns about potential conflicts of interest for Secretary Clinton and the Obama administration.”

Figures related to the company also donated a reported $145 million to the Clinton Foundation, though it’s unclear whether any of that was connected to the deal – and a key figure claims he sold his stake in the company years earlier.

Addressing the matter on C-SPAN in October, Hillary Clinton said “it’s the same baloney they’ve been peddling for years, and there’s been no credible evidence by anyone. In fact, it’s been debunked repeatedly and will continue to be debunked.”