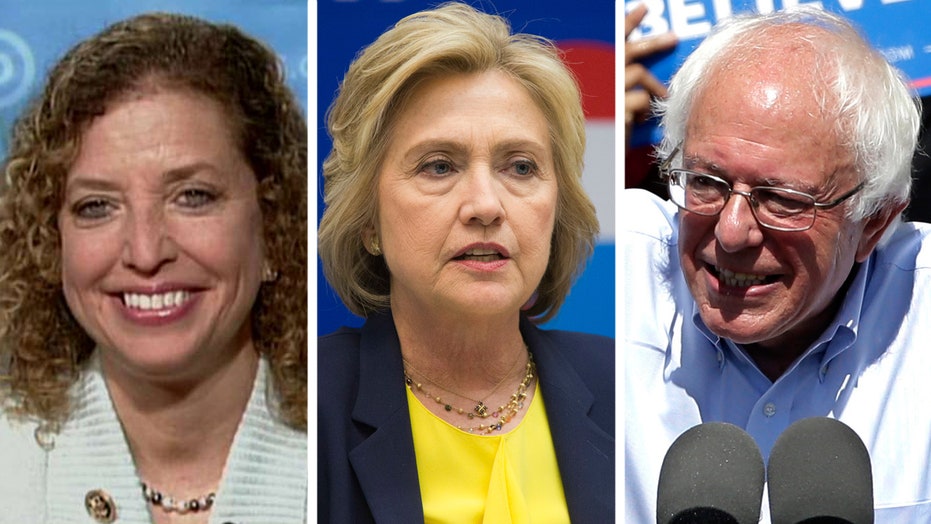 Rep. Debbie Wasserman Schultz says Sanders staying in the race is 'small potatoes' while Republicans have a 'big mess' with Trump

Even in the face of the FBI boss scoffing at Hillary Clinton’s description of the “investigation” into her email practices as a “security inquiry,” the head of the Democratic Party is now insisting the front-running Democratic presidential candidate isn’t even a focus of the probe.

“Secretary Clinton isn’t even a target of this inquiry, investigation, whatever ‘I’ word you want to use,” Democratic National Committee Chairwoman Debbie Wasserman Schultz told Fox News on Friday.

Asked to back up her statement, Schultz said she’s “repeatedly been told that” – though she did not say who might have told her.

But the claim that Clinton is not the focus would be appear to be challenged by recent developments in the case.

Senior aides to Hillary Clinton, including Huma Abedin and Cheryl Mills, have been interviewed by FBI agents in recent weeks.

Bryan Pagliano, the Clinton aide who installed the personal server used while she was secretary of state, has received a grant of immunity.

The bureau even confirmed in court documents earlier this year that the former secretary of state’s “use of a private e-mail server” is the focus. And when asked by Fox News earlier this week about Clinton’s repeated description of the probe as a mere security inquiry, FBI Director James Comey said he’s not familiar with that term.

“We’re conducting an investigation. … That’s what we do,” Comey told Fox News.

Schultz was asked by Fox News whether she was hearing different information from the FBI that would lead her to claim Clinton is not the focus.

Top administration officials have said they are not on a timeline for finishing the probe. Comey, speaking with reporters on Wednesday, said he prefers doing the investigation “well” over promptly and said he’s not “tethered” to a schedule.

Meanwhile, Clinton has voiced confidence that no wrongdoing will be found.

Appearing on CBS News’ Face the Nation, Clinton downplayed the FBI criminal probe, saying it was simply a “security inquiry” and “there was never any material marked classified that was sent or received -- by me.”

“I look forward to this being wrapped up,” she said.

The FBI probe is proceeding as Clinton also tries to wrap up the Democratic presidential nomination. Though she leads by hundreds of delegates, she has not yet clinched the nomination and rival Bernie Sanders is vowing to take the fight to the convention – he fueled his own underdog bid with a primary win Tuesday in West Virginia.

Asked Friday about internal party calls for Sanders to drop out as well as concerns that his bid is preventing Clinton from being able to pivot to a general election battle against Donald Trump, Schultz brushed off the concerns.

“We are able to walk and chew gum at the same time,” she said.

Schultz, meanwhile, has made similar definitive statements before about the nature of the FBI investigation, telling “Fox News Sunday” last month that the idea Clinton could face any legal troubles over her private email server is “ludicrous.”

“How do you know that?” host Chris Wallace asked.

“I’m simply confident that – as the investigation continues, that Hillary Clinton has made it clear, and there are scores of individuals who are associated with the federal government that have indicated that – it’s clear that she conducted herself completely legally,” she said.