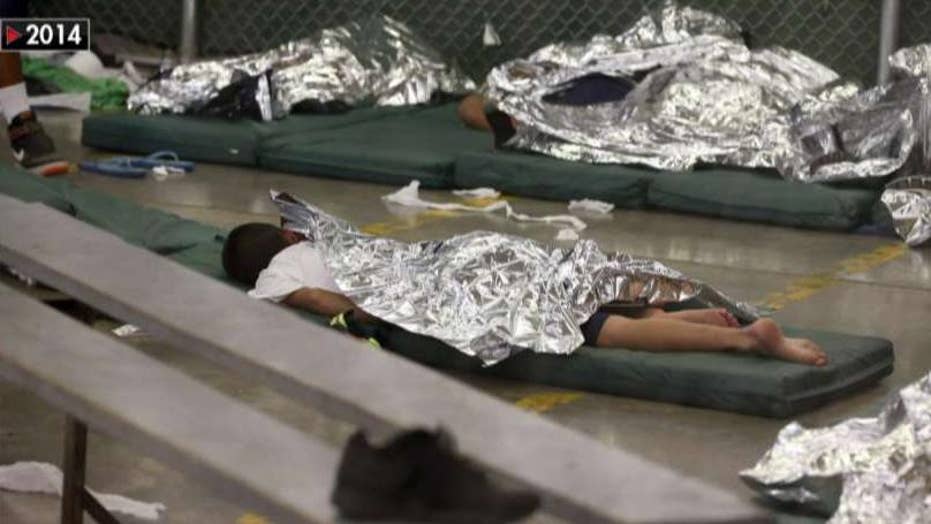 CBP Deputy Commissioner Robert Perez says it is time for Congress to get to work to find lasting solutions to deal with the border crisis.

The Trump campaign is firing back after the Democratic National Committee (DNC) released an attack advertisement on Tuesday showing footage of children held in an immigration facility with chain-link enclosures that was built -- and housed detained children -- during the Obama administration.

The advertisement specifically implies that President Trump's "zero tolerance" immigration policy was solely responsible for placing children in "cages" at the detention facility in McAllen, Texas -- even though photographic evidence makes clear that minors were held in similar conditions while Joe Biden was vice president. The Trump White House's policy of charging more illegal immigrants increased the number of family separations mandated under the 1997 Flores consent decree, although the president later signed an executive order limiting the separations.

The one-minute DNC spot goes on to suggest that Trump called white supremacists "very fine people," despite the president's explicit statement at the time that he was not defending white supremacists or neo-Nazis. The advertisement also charges that Trump had "turned our military on American citizens," when only state National Guard forces have deployed.

"Despite false narratives promoted by the Democrats and media, the president's unifying message is resonating with Americans throughout our country while Joe Biden continues to lean on divisive rhetoric and broken policies," Trump campaign deputy press secretary Ken Farnaso told Fox News.

The advertisement, which marked the kickoff of Democrats' 2020 election offensive, wastes no time in leveling several accusations against the president.

"For the last five years, [Trump] has brought America down with him," the narrator says. "Locking children in cages."

The advertisement then shows images from inside a detention facility in McAllen, Texas, that were released by the U.S. Border Patrol in June 2018. That immigration center was opened in 2014.

PolitiFact and numerous other fact-checkers have rejected Biden's claims that the Obama administration didn't lock people in cages at several facilities, including the one in McAllen.

The Los Angeles Times reported in 2014, for example, that some enclosures keeping immigrant children could be described as "makeshift cages."

And multiple 2014 photos from Getty Images show children held in what could be described as "cages."

WHOOPS: HOUSE DEMS USE OBAMA-ERA PHOTO OF KIDS IN 'CAGES' TO HIT TRUMP

And, a viral tweet of children held in a "cage" was similarly taken during the Obama administration, according to numerous fact checks. Last year, Democrats on the House Oversight Committee deleted tweets that promoted an upcoming hearing on “kids in cages” after being called out for using Obama-era images of migrants in detention to highlight current conditions at the border.

“Joe Biden is the king of ‘locking kids in cages,'" Trump campaign deputy director of communications Matt Wolking told Fox News. "As vice president, Biden oversaw the construction of many of the detention facilities that exist today, and said he was ‘proud’ of the conditions the children were kept in.”

That was a reference to Biden's 2014 statement. "I know of no assertion or accusation that we’re not meeting every international and national standard, going out of our way to treat these young people and the families accompanied with a minor fairly, humanely, and put them in circumstances that if, God forbid, our children were in that circumstance, we’d want them in," Biden said at the time. "I’m proud of my country, and the way they’re handling this on that score."

Some Obama era officials have agreed that the Trump administration didn't pioneer the practice of placing individuals in chain-link enclosures.

"Chain link barriers, partitions, fences, cages, whatever you want to call them, were not invented on January 20, 2017, OK?" remarked Jeh Johnson, who served as the Obama administration's Homeland Security director.

Although Trump noted at the time that he was "not talking about the neo-Nazis and the white nationalists because they should be condemned totally," and was instead talking about those protesting the removal of Confederate statues on historical grounds, Democrats and some top Republicans criticized him for not speaking out more forcefully from the start.

Speaking at a Senate Judiciary Committee hearing on July 22, 1993, during the confirmation process for Associate Justice Ruth Bader Ginsburg, Biden offered something of a positive endorsement for the United Daughters of the Confederacy (UDC), which has been linked to the Ku Klux Klan (KKK).

“I, too, heard that speech and, for the public listening to this, the senator made a very moving and eloquent speech," Biden said at the time, referring to remarks by then-Alabama Democrat Sen. Howell Thomas Heflin. "As a son of the Confederacy, acknowledging that it was time to change and yield to a position that Sen. Carol Moseley-Braun raised on the Senate floor, not granting a federal charter to an organization made up of many fine people who continue to display the Confederate flag as a symbol.”

That was a reference to Moseley-Braun's remarks earlier in the day concerning the UDP, an organization that Salon has reported "keeps Confederate statues standing and spreads lies about America’s history of slavery."

"[S]ince the UDC was founded in 1894, it has maintained a covert connection with the Ku Klux Klan," Heidi Christensen, the former president of the Seattle chapter of the UDC, told Salon. "In fact, in many ways, the group was the de facto women’s auxiliary of the KKK at the turn of the century. It’s a connection the group downplays now, but evidence of it is easily discoverable -- you don’t even have to look very hard to find it.”

“Every clubhouse of the United Daughters of the Confederacy should have a memorial tablet dedicated to the Ku Klux Klan; that would be a monument not to one man, but to five hundred and fifty thousand men, to whom all Southerners owe a debt of gratitude," Annie Cooper Burton, then the president of the Los Angeles chapter of the UDC, wrote in a 1916 publication.

And, the Biden attack ad this week also states that Trump "turned our military on American citizens." Although the president has openly considered the possibility of using active-duty military members to quell protesters, he has not done so. National Guard members, under the authority of state governments, have been deployed in some jurisdictions.