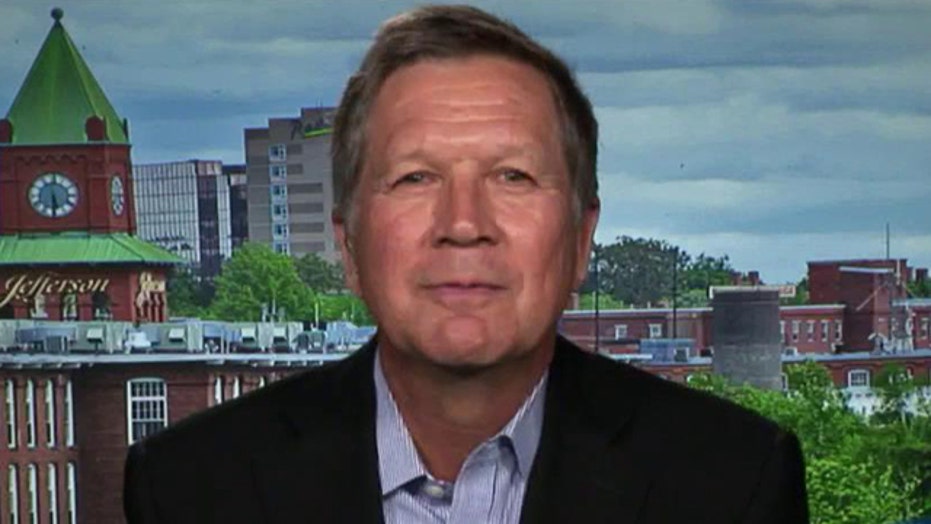 Accusing her of "dividing Americans" and political pandering, several of Hillary Clinton's potential Republican rivals fired back Friday after the Democratic frontrunner accused them of trying to make it more difficult for Americans -- particularly minorities and young people -- to vote.

She described them as members of a GOP vanguard that has made it more difficult for students to vote, cut the numbers of days set aside for early voting and demanded voter ID provisions.

In perhaps her most pointed line, she said: "We have a responsibility to say clearly and directly what's really going on in our country -- because what is happening is a sweeping effort to disempower and disenfranchise people of color, poor people, and young people from one end of our country to the other."

"Don't be running around the country dividing Americans," he told Fox News.

Kasich's state is also on the other end of a related lawsuit filed in part by Clinton campaign lawyer Marc Elias.

That suit claims Ohio's voting restrictions are designed to suppress minority and young voters. It calls for halting a number of measures including laws that restrict the casting of absentee and provisional ballots and limit the times and locations for early voting -- such as abolishing an early voting period known as "Golden Week" in which voters could register and cast an in-person ballot the same day.

"Don't come in and say we are trying to keep people from voting when her own state has less opportunity for voting," Kasich told Fox News. "And she is going to sue my state? That's just silly."

Ohio Secretary of State Jon Husted also said Ohio is a "national leader in voter access," urging Clinton to "tell her attorneys" to drop the lawsuit.

The lawsuit is not officially connected to the Clinton campaign, though the candidate has since made voting laws a big issue in her run.

In Thursday's speech, she alleged, "Republicans are systematically and deliberately trying to stop millions of American citizens from voting." She also called for automatic voter registration for all Americans when they turn 18, unless they opt out, and for 20-day early voting in all states.

Directly challenging Republicans by name, which Clinton has largely avoided until now, she plunged into a partisan debate over voting rights that has roiled statehouses across the country. Democrats contend restricting voter access and registration purposely aims to suppress turnout among minority and low-income voters. Republicans say the voting changes are crucial to guard against voter fraud.

Under Walker, for example, Wisconsin requires proof of residency except for overseas and military voters. The state shortened the early voting period and increased residency requirements.

In a statement, Walker responded to the criticism leveled by the Democratic candidate: "Hillary Clinton's rejection of efforts to make it easier to vote and harder to cheat not only defies logic, but the will of the majority of Americans. Once again, Hillary Clinton's extreme views are far outside the mainstream."

Clinton said that in New Jersey, Christie had vetoed a bill to extend early voting. She said as Florida's governor, Bush had conducted a "deeply flawed" purge of eligible voters, by having the names of people who were mistakenly thought to be felons removed from voting rolls.

Christie, at a stop in New Hampshire Friday, said, "Secretary Clinton doesn't know the first thing about voting rights in New Jersey ... or in the other states that she attacked." He said she just wants "an opportunity to commit greater acts [of] voter fraud around the country."

"When I got on the airline to come up here yesterday I had to show my photo ID. Now, Hillary Clinton may not have had to show a photo ID to get onto an airplane in a long time," he quipped. "The people of the state of Texas is who she's taking on. Because that was a law that was passed by the people of the state of Texas. She just went into my home state and dissed every person who supports having an identification to either get onto an airplane or to vote."

Perry declared his presidential campaign Thursday. Bush, Walker and Christie have not yet formally announced a 2016 bid, though Bush's announcement is set for June 15.