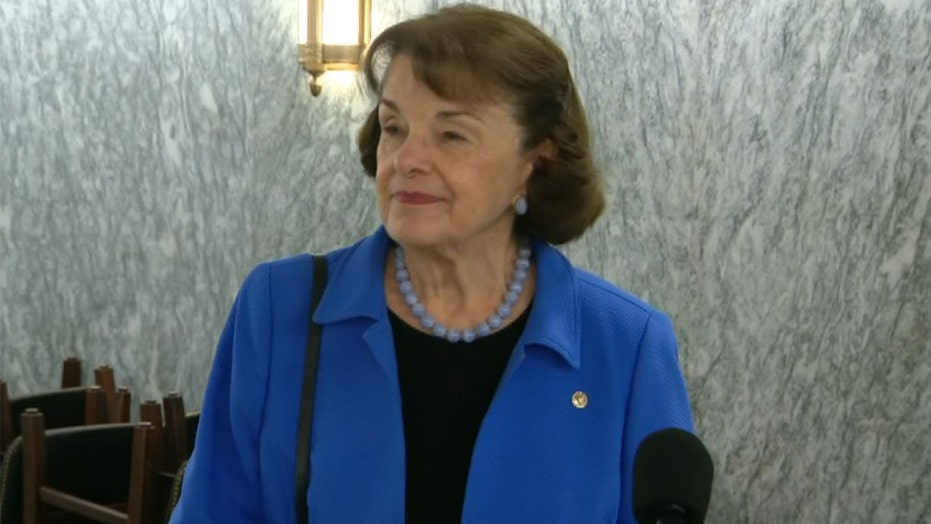 Senate Judiciary Committee Ranking Member Dianne Feinstein said in a statement Friday evening that the successor to the late Justice Ruth Bader Ginsburg, who was the face of the liberal bloc on the Supreme Court and a leading light for women's rights, should "under no circumstances" be confirmed before Inauguration Day in January.

"The country lost a truly amazing woman tonight with the passing of Justice Ruth Bader Ginsburg. She may have been small of stature but she was an absolute giant of jurisprudence," Feinstein, D-Calif., said. "Justice Ginsburg was a trailblazer for women. She was a once-in-a-generation legal mind and a passionate champion for the rights of all Americans. Simply put, she was an extraordinary person whose passing is a loss to the nation."

Feinstein, the top Democrat on the key committee for vetting Supreme Court nominees, added: "Under no circumstances should the Senate consider a replacement for Justice Ginsburg until after the presidential inauguration. Senator McConnell made his position clear in 2016 when he held Justice Scalia’s seat vacant for 10 months so he could deny President Obama an appointment -- a goal he himself admitted."

Feinstein said that the late Justice Antonin Scalia's seat was held open when he died 237 days before election day. Ginsburg died less than two months before the election.

"It has been reported that Justice Ginsburg’s wish was that the winner of the upcoming election nominate her successor," Feinstein added. "We should all honor that wish and wait until after the presidential inauguration to take action.'

Senate Majority Leader Mitch McConnell, R-Ky., has made clear that he intends to move ahead with the confirmation process for Ginsburg's replacement after President Trump nominates somebody.

"President Trump’s nominee will receive a vote on the floor of the United States Senate," McConnell said in a statement Friday.

He explained his reasoning for why 2020 is different than 2016, when he held open the seat for Justice Scalia's replacement -- eventually Justice Neil Gorsuch -- until after the presidential election.

"In the last midterm election before Justice Scalia’s death in 2016, Americans elected a Republican Senate majority because we pledged to check and balance the last days of a lame-duck president’s second term. We kept our promise. Since the 1880s, no Senate has confirmed an opposite-party president’s Supreme Court nominee in a presidential election year," McConnell said.

He continued: "By contrast, Americans reelected our majority in 2016 and expanded it in 2018 because we pledged to work with President Trump and support his agenda, particularly his outstanding appointments to the federal judiciary. Once again, we will keep our promise."

As the Supreme Court confirmation battle -- happening in the middle of a pandemic and a presidential election -- continues, all eyes will be on the handful of moderate senators on the Republican and Democrat sides of the aisle who could serve as swing votes. Sen. Susan Collins, R-Maine, is one of them. She cast the deciding vote in Justice Brett Kavanaugh's confirmation.

Her statement did not indicate whether or not she would vote for a Ginsburg successor before the election.

"Justice Ruth Bader Ginsburg was a trailblazer for women’s rights, a fierce champion for equality, and an extremely accomplished American who broke countless barriers in the field of law," Collins said. "Throughout her life, Justice Ginsburg surmounted discrimination and sexism through her brilliance, tenacity, and wit, becoming one of the most prominent legal luminaries of our time."

Collins also spoke about how Ginsburg "has been a role model to generations of women, and her legacy will live on in the countless people she inspired."

West Virginia Sen. Joe Manchin, a Democrat, also will be one of the swing votes. He also did not indicate whether he would vote for a Ginsburg replacement so close to a presidential election.

"In this time of sorrow, I pray that our country can unite in sending our most heartfelt condolences to her children, grandchildren and all who mourn the loss of this courageous woman," Manchin said.

One Republican senator, however, has already confirmed that she will not vote for a Trump nominee before the presidential election.

"I would not vote to confirm a Supreme Court nominee. We are 50 some days away from an election," Sen. Lisa Murkowski, R-Alaska, told Alaska Public Media before Ginsburg's death Friday.

And vulnerable Sen. Martha McSally, R-Ariz., on the other hand, confirmed Friday that she does think the Senate should vote on a Trump nominee.

"This U.S. Senate should vote on President Trump's next nominee for the U.S. Supreme Court," she said.

Sen. Mitt Romney, R-Utah, refuted a claim that he had committed to not voting to confirm a Trump nominee.

There are other Republican senators who are in close reelection races, including Sen. Joni Ernst, R-Iowa, and Sen. Thom Tillis, R-N.C. Neither indicated Friday night whether or not they would vote for a Trump nominee ahead of the election.

Vulnerable Democratic Sen. Doug Jones of Alabama hailed Ginsburg for "her legal acumen... her sharp wit, her tireless advocacy for voting rights, and her historic role in fighting for a more equal society for women across the country." He did not indicate whether he would consider voting for a replacement before the election.

The impending battle over Ginsburg's seat is likely to spur millions of dollars in spending, intense lobbying, and fundamentally change the focus of the presidential election and U.S. Senate races.