Acting Department of Homeland Security McAleenan testifies on Capitol Hill that a 51-year-old man bought a 6-month-old baby for $80 in Guatemala to pose as a family unit to get into the U.S.

Acting Homeland Security Secretary Kevin McAleenan relayed a stunning account Thursday of how a 51-year-old man “bought” a 6-month-old child in order to exploit loopholes in the U.S. immigration system that would allow him to stay in the country.

He told the story during House testimony as he decried the extreme tactics being used to take advantage of U.S. laws.

“Unfortunately we see that all too often now ... adults that are bringing children with them that are not their own to try and take advantage of what they perceive as a loophole in our law that would allow them to be released into the United States,” McAleenan told the House Oversight Committee when asked about the problem of migrants fraudulently claiming to be members of family units when they apply for asylum at the border.

“We’ve had egregious cases including a 51-year-old man who bought a 6-month child for $80 in Guatemala, and admitted that when confronted with a DNA test by a Homeland Security Investigations agent conducting a pilot at one of our border stations,” he said.

The shocking account comes amid a continuing humanitarian crisis at the border, which Trump officials have blamed in part on the 1997 Flores court agreement that limits how long children can be held in custody.

That has led to family units with children being released into the homeland as their asylum cases are processed. McAleenan has previously testified that this means children are now viewed as a passport into the U.S. -- and that that perception is based in reality.

Later Thursday, he spoke of the problem of “child recycling” that authorities were investigating. 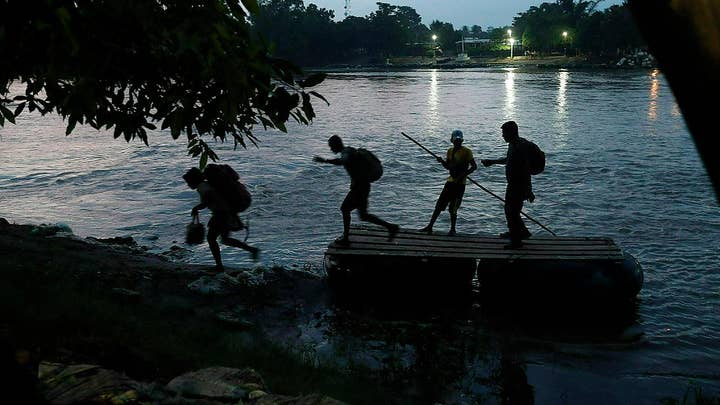 “ICE now has three significant cases in multiple cities around the country where they’ve identified a small group of children, maybe 5-8 children, being used by dozens of adults to cross our border seeking release into the United States,” he said.

“It’s a huge indication that the gaps in our system are putting children at risk,” he said.

Republicans and the Trump administration have focused on closing those perceived loopholes. This week, the Trump administration announced a policy that requires most migrants entering through America’s southern border to first seek asylum in one of the countries they traversed – whether in Mexico, in Central America, or elsewhere on their journey.

Democrats have highlighted the poor conditions in which they say many migrants are kept, repeating a charge that children are kept in “cages” and describing the conditions as cruel.

Rep. Jackie Speier, D-Calif., held up pictures of what she said she saw at border centers of more than 40 men in a cell that could normally accommodate five people. She said one man had been held 40 days without a shower or being able to brush his teeth.

“This would not be allowed as a kennel for dogs and that’s how we’re housing them,” she said. “It’s unacceptable and it has to change.”

McAleenan said that he and DHS had been highlighting the poor conditions and has repeatedly asked Congress for help. He noted that while Congress passed a $4.5 billion funding bill for the border, it did not include money for more beds for single adults.

Earlier, he said that efforts to reduce overcrowding were working and that the number of unaccompanied children in custody at the border had reduced from 2,700 in June to under 350 as of this week, with an average of 35 hours in custody.

However, he warned: “Make no mistake, the border flows and the custody situation remain beyond crisis levels.”