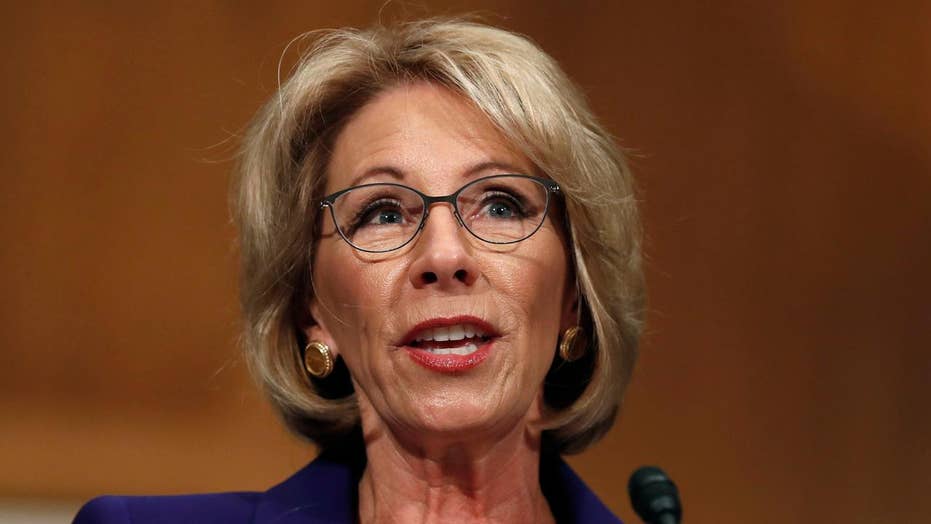 Teachers unions, advocacy groups and others are jamming Senate phone lines, funding TV ads and rallying on the ground to stop Betsy DeVos from becoming President Trump’s secretary of Education. But their efforts, at least for now, appear to be coming up one vote short.

With her final Senate confirmation vote set for Tuesday at noon, the chamber still seems locked in a 50-50 split on the nomination. If that happens, Vice President Pence is expected to cast a historic, tie-breaking vote to confirm her.

This scenario has DeVos' critics going into overdrive in a bid to peel off one more Republican to vote nay.

“We are trying to do everything we can to persuade just one more Republican to join us,” Sen. Patty Murray, D-Wash., said Monday. “Double down on your advocacy. … She’s spent her career trying to destroy public schools.”

The Democrats' appeals come after GOP Sens. Susan Collins, of Maine, and Lisa Murkowski, of Alaska, announced their opposition last week to DeVos, the school choice advocate and wealthy Michigan political donor. Presuming all 48 Democratic senators oppose DeVos, this brings the tally to 50-50.

Several of the major groups rallying against DeVos, including the American Federation of Teachers union, declined on Monday to name which of the remaining Republican senators they are targeting.

Senate Democrats acknowledged the challenge ahead, as they took the floor Monday planning an all-night session of speeches railing against her nomination.

While teachers unions and others say DeVos’ support for voucher programs and other school-choice efforts will hurt public education, backers say her plans will provide more opportunities to families and an alternative to public schools, which in some parts of the country are showing little progress improving student proficiency in core subjects.

"We are very confident that Betsy DeVos is going to be the secretary of Education," he said. "It would be my high honor to cast the deciding tie-breaking vote on the floor of the Senate."

Among the names mentioned early as potential targets to flip were GOP Sens. Pat Toomey, Pennsylvania; Deb Fischer, Nebraska; and Rand Paul, Kentucky. All of them, however, have publicly backed DeVos.

“If you are a Republican senator who is going to vote against DeVos, you would have needed to make that clear well in advance,” David Payne, a Republican strategist and partner at Vox Global, said Monday. “No way would somebody do that on the Senate floor. That would be a massive embarrassment. Not going to happen.”

Among the other major groups trying to fight the nomination are End Citizens United and Every Voice, whose strategy is largely focused on trying to get senators who have received DeVos campaign donations to recuse themselves from voting.

“We’re continuing to cast a wide net with our work to pressure senators with donations from the DeVos family … to avoid any conflicts of interest,” Laura Friedenbach told Fox News on Monday.

To be sure, members of Congress have reported a high volume of calls since Trump, a Republican, was elected in November.

However, Clark, like other Capitol Hill aides, have made clear that the calls are for a variety of constituent concerns, including the future of ObamaCare and Cabinet nominations beyond DeVos, and that many are from out-of-state voters.

Clark also said “an extremely high volume” of calls have come from out of state.

Friedenbach also made clear that Every Voice’s efforts to expose money in politics and the critique of DeVos will continue even if she becomes Education secretary.

“The after-effects of the widespread public backlash to her nomination will linger,” she said. “People are tired of a government that works best for the wealthiest among us. … Rewarding a big donor with a Cabinet position will only add fuel to the fire.”

American Federation of Teachers President Randi Weingarten said Monday: “We’re seeing a massive wave of opposition to Betsy DeVos. ... We’ve never seen someone tapped for this job who is so ill informed … and who would give such preferential treatment to for-profit schools, vouchers and other strategies that actively drain funding from public schools.”