U.S. Rep. Devin Nunes called for the release of “all backup and source information” for the Mueller report on Friday after a newly released transcript of a former Trump lawyer's voicemail message included content that did not appear in a version that was part of the special counsel's Russia investigation findings.

“It’s all a fraud,” Nunes wrote on Twitter, referring to the Mueller report, to which the California Republican referred using the hashtag #muellerdossier.

Nunes, ranking member of the House Intelligence Committee, was reacting to the release of a voicemail message that John Dowd, a former lawyer for President Trump, had left for a lawyer representing former national security adviser Michael Flynn, in which Dowd asks for a “heads up” if Flynn planned to say anything damaging about Trump to Mueller’s team.

"This is why we need all backup and source documentation for the #muellerdossier released publicly. It’s all a fraud..." Devin Nunes wrote on Twitter Friday in reaction to the release of the transcript of a voicemail from John Dowd to Michael Flynn's lawyer. (Associated Press)

Nunes retweeted a side-by-side comparison of the Dowd transcript text and the Mueller report text, suggesting that the Mueller report did not disclose the full Dowd message. The Mueller had redacted the part of the voicemail where Dowd said he wanted the heads up “not only for the president but for the country” and that he wasn’t asking for “any confidential information.”

Dowd said, according to the transcript, “I understand that you can’t join the joint defense; so that’s one thing. If, on the other hand, we have, there’s information that … implicates the president, then we’ve got a national security issue, or maybe a national security issue, I don’t know … some issue, we got to — we got to deal with, not only for the president, but for the country. So … uh … you know, then-then, you know, we need some kind of heads-up.” The phone call took place in November 2017. 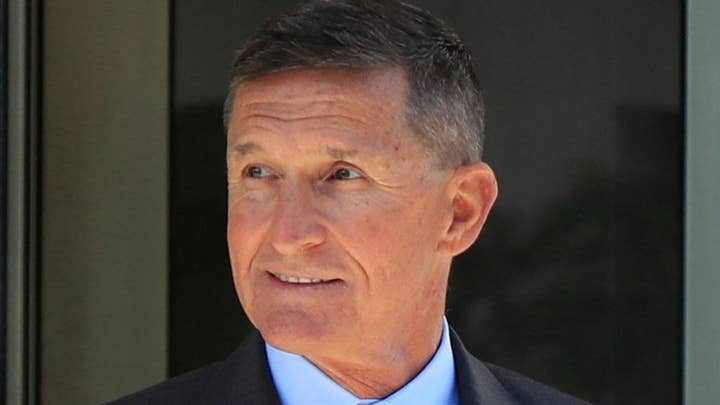 Federal prosecutors released the transcript in a court filing. Flynn, who pleaded guilty last year to lying to federal investigators about contacts with Russians and is awaiting sentencing, said the call was an effort to obstruct his cooperation with Mueller’s team.

"This is clearly a baseless, political document designed to smear and damage the reputation of counsel and innocent people," Dowd said in a statement Friday.

Several investigations into the origins of the Russia probe are currently underway, including by the Justice Department. They were instigated by the president and Republicans who claim the Russia investigation was based on bad intelligence and illegal spying by the FBI on the Trump campaign.