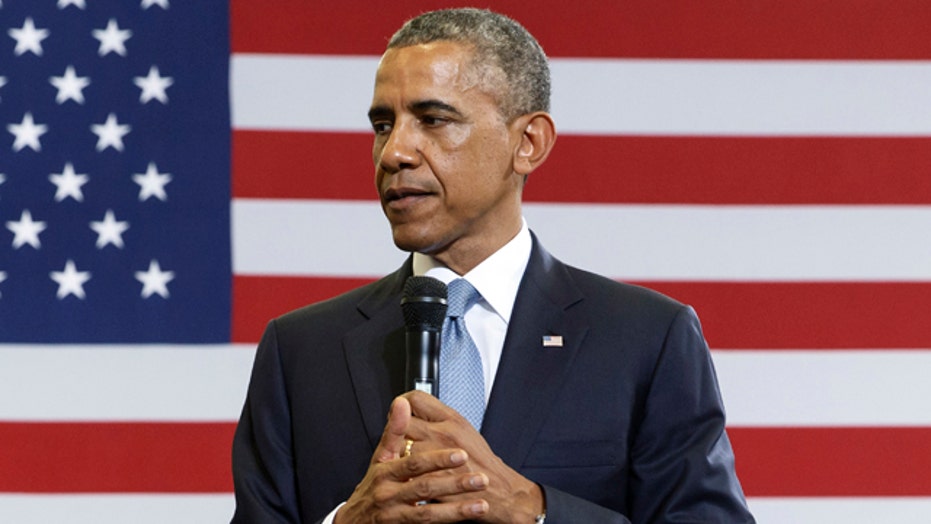 Obama looks to rally base with 'impeachment' talk

In a matter of days, Democrats looking to head off Republican gains in November have turned scattered talk of President Obama's impeachment into a sustained rallying cry -- even managing to fundraise off the perceived threat.

The campaign arm for House Democrats has been sending out a barrage of fundraising emails warning of the impeachment threat, and claims to have raised roughly $2 million in their latest push.

The president and first lady Michelle Obama have warned of that possibility on the stump. And a top White House official even said Friday “it would be foolish to discount” a bona fide impeachment push by Republicans.

The frenzied warnings have Republicans scratching their heads – after all, few if any in the party brass are openly pushing impeachment -- and accusing the other side of ginning up the controversy for political gain.

“You know, this might be the first White House in history that's trying to start the narrative of impeaching their own president,” House Majority Whip Steve Scalise, R-La., told “Fox News Sunday.”

From the Democratic side, warnings that Republicans might try to impeach Obama potentially strengthen their case, among supporters, for why Democrats should keep control of the Senate. Under the Constitution, even though the House votes to impeach, it is the Senate that weighs whether to convict. Without a majority of support in the Senate, any GOP-backed impeachment push would ultimately fail.

Former Alaska Gov. Sarah Palin kicked off the impeachment headlines earlier this month when she penned a column calling for it. But to date, most senior Republicans have shied away from that call.

House Speaker John Boehner stood by his decision to proceed with a lawsuit against the president over alleged abuse of executive power, but would not sign on to the impeachment idea. Even Rep. Michele Bachmann, R-Minn., one of the most conservative members of the House GOP caucus, would not get on board with impeachment (though she did back impeaching “certain officials in the Executive Branch.")

He added: “And, ironically, they're going out and trying to fundraise off that, too.”

At the same time, Scalise would not say whether impeachment is off the table, despite being asked repeatedly. This only fueled Democrats’ claims that impeachment is the next big thing for Republicans.

“The fact that the third-highest-ranking Republican in the House is refusing to rule out impeachment offers a stunning view of the extreme measures this Republican Congress will take to push their reckless partisan agenda,” Democratic Congressional Campaign Committee Chairman Steve Israel said in a statement. “Republicans will spend the final week before their summer vacation plotting their lawsuit against the President, and now Scalise just made it clear that impeachment is absolutely on the table for House Republicans.”

Democrats are also fundraising off Boehner’s vow to bring suit against the president. But Democratic leaders, including the president, quickly began connecting the lawsuit and impeachment, blurring the lines between the two.

“You hear some of them – ‘sue him,’ ‘impeach him.’ Really? Really? For what? You’re going to sue me for doing my job?” Obama said earlier this month in Austin, Texas.

White House adviser Dan Pfeiffer said Friday that Boehner “opened the door” to impeachment by going down the lawsuit path.

Still, aside from impeachment proceedings being politically perilous for the party that initiates them, a new Fox News poll underscores that the public has little appetite for impeachment at this point.

“There is no appetite for impeachment for the president,” Scott Brown, the former Republican Massachusetts senator who is running for a New Hampshire seat this year, told Fox News on Monday.