High-profile Democrats are decrying a controversial resolution from Rep. Ilhan Omar affirming the right to boycott Israel, even as they rally behind her and three other first-term congresswomen attacked by President Trump.

Omar, D-Minn., proposed the resolution earlier this week in a bid to push back against U.S. laws banning the Israel boycotts. The text of the measure affirms the right of Americans to organize boycotts of foreign countries.

While the resolution doesn’t explicitly name Israel or the pro-Palestinian Boycott, Divestment and Sanctions (BDS) movement, she told media outlets that the resolution concerns the Jewish state.

'We are introducing a resolution … to really speak about the American values that support and believe in our ability to exercise our First Amendment rights in regard to boycotting.'

“We are introducing a resolution … to really speak about the American values that support and believe in our ability to exercise our First Amendment rights in regard to boycotting,” Omar told Al-Monitor.

But Democrats, who rushed to Omar's defense this week after Trump’s Twitter attacks that critics called racist, have once again been put in an awkward spot by Omar's Israel criticism. Earlier this year, many Democrats condemned comments from Omar deemed anti-Semitic. Now, several members are making clear they're not on board with her BDS resolution.

California Democratic Rep. Brad Sherman, one of the more senior Jewish lawmakers in the House, told The Jerusalem Post that the resolution proposed by the fellow Democrat is not serious.

“I can’t imagine that any committee is going to mark up or take seriously any pro-BDS resolution,” Sherman said.

“Am I worried about the overall BDS movement worldwide as an economic matter? No. As an effort to delegitimize Israel, of course. The comments here today are a tiny part of that delegitimizing effort.”

“I think the BDS movement is harmful, and anyone that promotes it is making a big mistake,” he told The Washington Times.

Sherman told the same newspaper the measure was "dead on arrival."

'I think the BDS movement is harmful, and anyone that promotes it is making a big mistake.'

Rep. Ted Deutch, D-Fla., said during the committee hearing that the BDS movement “envisions a world without Israel,” before adding, “I reject it!” 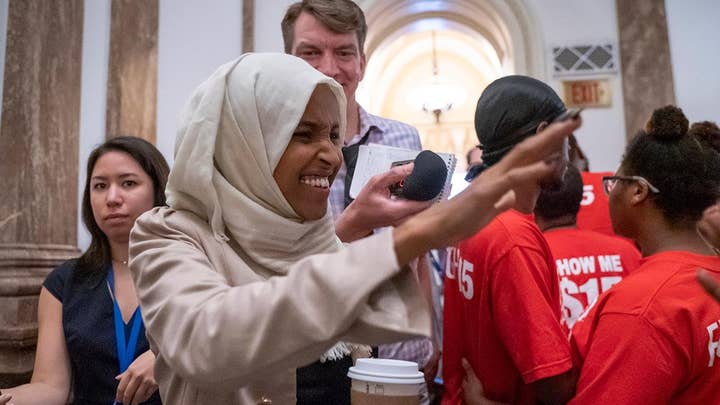 Omar’s resolution, co-sponsored by Reps. Rashida Tlaib, D-Mich., and John Lewis, D-Ga., affirms the right to boycott as an expression of free speech -- and even cites examples of boycott movements against Nazi Germany, the Soviet Union, and apartheid South Africa.

“Americans of conscience have a proud history of participating in boycotts to advocate for human rights abroad including ... boycotting Nazi Germany from March 1933 to October 1941 in response to the dehumanization of the Jewish people in the lead-up to the Holocaust,” Omar said in the resolution introduced Tuesday.