Sen. Josh Hawley sparked outrage Wednesday with his decision to object to the certification of certain states' Electoral College votes during Congress' joint session on Jan. 6 -- joining several House members who have also said they will object to force a vote in each the House and the Senate over whether to accept individual slates of electors.

"The political equivalent of barking at the moon," Sen. Dick Durbin, D-Ill., said of Hawley joining the challenge to electoral slates. "This won’t be taken seriously, nor should it be. The American people made a decision on Nov. 3rd and that decision must and will be honored and protected by the U.S. Senate and House of Representatives."

The challenge by Hawley, R-Mo., is almost certain to fail. The votes to overturn any slates of electors are simply not there in either the House or the Senate, where even Sen. Mitch McConnell, R-Ky., and several other GOP members have congratulated President-elect Joe Biden on his win. McConnell has discouraged his members from joining the House effort to challenge electors.

But Hawley's move is certainly not unprecedented.

The last three times a Republican has been elected president -- Trump in 2016 and George W. Bush in both 2000 and 2004 -- Democrats in the House have brought objections to the electoral votes in states the GOP nominee won. In early 2005 specifically, Sen. Barbara Boxer, D-Calif., along with Rep. Stephanie Tubbs, D-Ohio, objected to Bush's 2004 electoral votes in Ohio.

That forced the chambers to leave their joint session and debate separately for two hours on whether to reject Ohio's electoral votes. Neither did. But the objection by Boxer and Tubbs serves as a modern precedent for what is likely to happen in Congress on Jan. 6.

Notably, some Democrats lauded Boxer's move at the time, including Durbin himself.

"Some may criticize our colleague from California for bringing us here for this brief debate," Durbin said on the Senate floor following Boxer's objection, while noting that he would vote to certify the Ohio electoral votes for Bush. "I thank her for doing that because it gives members an opportunity once again on a bipartisan basis to look at a challenge that we face not just in the last election in one State but in many States."

"I believe that Senator Barbara Boxer (D-CA) and Representative Stephanie Tubbs Jones (D-OH) have performed a very valuable public service in bringing this debate before the Congress. As Americans, we should all be troubled by reports of voting problems in many parts of the country," Van Hollen, at the time a House member, said in a press release. "I have been particularly concerned about the lack of a verifiable paper record in connection with electronic voting systems. I am proud to be a co-sponsor of legislation to solve that problem."

117TH CONGRESS MAY OFFER SOME SURPRISES DUE TO THE PANDEMIC

Van Hollen also made clear in 2005 that he accepted the result of the presidential election that Bush won, saying, "It would have been irresponsible to use the certification process to attempt to change that result. Doing so would establish a terrible precedent." Nevertheless, Van Hollen slammed Hawley on Wednesday.

"Sen. Hawley’s actions are grossly irresponsible. He’s attempting to undermine our democratic process, fuel Trump’s lies about voter fraud, and delay the certification of Biden’s win," Van Hollen said in a tweet. "In the end, this reckless stunt will fail, and Joe Biden will become President on Jan. 20, 2021."

One current senator who did vote to outright reject the Ohio electoral votes in early 2005 was then-Rep. Ed Markey, D-Mass. He was among 31 House members at the time to vote in favor of rejecting Ohio's electoral slate.

Markey on MSNBC Wednesday, however, said Hawley's challenge "is just an extension of what Donald Trump is trying to perpetrate as a fraud on the American people" and "there is no basis for any questioning of Joe Biden as our next president."

Boxer was the only senator in 2005 to vote to reject Ohio's electoral votes.

It's almost certain that no states' electoral votes will actually be rejected by Congress. Doing so, after a challenge is lodged by at least one member of the House and Senate respectively, would require a majority vote by both chambers.

Democrats hold a majority in the House. And many Senate Republicans have already acknowledged that Biden won the election, meaning it's unlikely either chamber will vote to reject a slate of electors.

To that effect, Sen. John Thune, R-S.D., recently said a challenge to electors "will go down like a shot dog."

"I have no doubt that on next Wednesday, a week from today, that Joe Biden will be confirmed by the acceptance of the vote of the Electoral College as the 46th president of the United States," she said.

In 2005 on the House floor, Pelosi said lauded Boxer's challenge.

"Today we are witnessing Democracy at work. This isn't as some of our Republican colleagues have referred to it, sadly, as frivolous. This debate is fundamental to our democracy," she said at the time. "The representatives of the American people in this house are standing up for three fundamental American beliefs: The right to vote is sacred; that a representative has a duty to represent his or her constituents; and that the rule of law is the hallmark of our nation."

Pelosi, however, made clear that "under the rule of law today this House will accept the election of President Bush and Vice President Cheney. ... There is absolutely no question about that. This isn't about in any way rejecting that outcome. ... It is instead to discuss the real problems with our electoral system."

Hawley in his statement announcing that he will object to Electoral College certification notably does not adopt some of the wilder conspiracy theories pushed by those on the right about the election results. He does not accuse voting technology companies of changing votes or of being in cabal with foreign countries. He does not reference alleged ballot "dumps." In fact, Hawley does not even make an accusation that there was widespread fraud, for which no evidence has been found.

5Speaker of the House Nancy Pelosi (D-CA) speaks during her weekly news conference on Capitol Hill on December 4, 2020 in Washington, DC. Pelosi in 2005 said that the objection to certifying Ohio's electoral votes for George W. Bush by Sen. Barbara Boxer, D-Calif., was a positive chance to discuss election security, not an attempt to overturn the result of the election. (Photo by Drew Angerer/Getty Images)

"I cannot vote to certify the electoral college results on Jan. 6 without raising the fact that some states, particularly Pennsylvania, failed to follow their own state election laws," Hawley said Wednesday. "And I cannot vote to certify without pointing out the unprecedented effort of mega corporations, including Facebook and Twitter, to interfere in this election, in support of Joe Biden. At the very least, Congress should investigate allegations of voter fraud and adopt measures to secure the integrity of our elections. But Congress has so far failed to act."

He added: "For these reasons, I will follow the same practice Democrat members of Congress have in years past and object during the certification process on Jan. 6 to raise these critical issues."

It's not clear exactly which states Hawley may join House members and object to. In an interview on "The Story," guest hosted by Will Cain, on Wednesday night he did say that Pennsylvania specifically did not follow its own election laws.

Hawley also in his interview with Cain did not explicitly say that his goal in objecting to the electoral votes of some states is to tangibly change the result of the election. He instead said he hopes to force a debate on election integrity issues and to represent Americans who don't currently have faith in the electoral system. Hawley also did not fully commit to actually voting against the certification of any states' electoral votes. 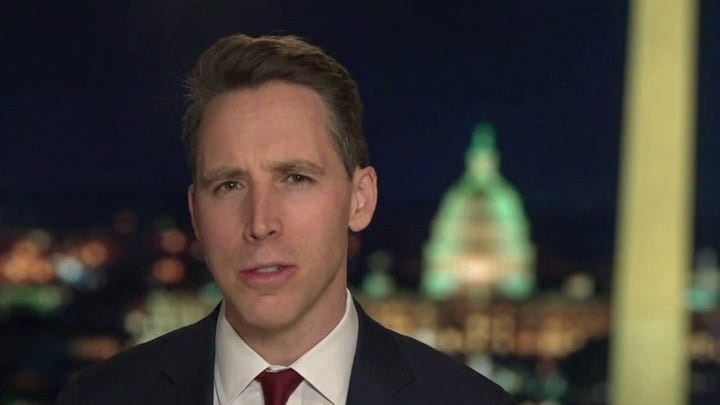 "The state that I object to or the states that I object to, and we'll see how the process goes. But I'm likely to vote against the certification in order to make this point," Hawley told Cain. "I'm going to try to force a debate on all of these points."

When asked what he could accomplish, Hawley added: "You can accomplish actually putting people on record and forcing this issue to the front."

Hawley's office did not expand on his Wednesday comments when asked to clarify on Thursday.

Hawley on "The Story" also said there were irregularities and fraud in the 2020 election and added, "There needs to be an investigation as to how widespread this fraud was and there needs to be change. Our election laws need to change."

The offices of Durbin, Van Hollen and Markey did not immediately return requests for comment. Pelosi's office pointed to the comments she made in 2005 making clear Democrats' objective was not to overturn the result of the presidential election.

Hawley's objection will lead to debate in the House and Senate on rejecting slates of electors for just the third time since 1887, including the 2005 affair.

But in 2001 and 2017, several House Democrats objected to the certification of the results in favor of Bush and Trump, despite not being joined by any senators.

During the 2017 counting of the Electoral College votes, then-Vice President Biden became visibly agitated as he repeatedly needed to remind Democratic House members objecting to Trump electors that there was no debate allowed in the joint session and that they needed senators to sign their objections.

In one instance, after repeatedly banging his gavel as Rep. Pramila Jayapal, D-Wash., objected to the results, Biden declared, "It is over," sparking laughter and a standing ovation from the GOP side of the chamber.

At another time, Rep. Barbara Lee, D-Calif., said: "I object because people are horrified by the overwhelming evidence of Russian interference in our election."

Biden reminded her that debate is prohibited in the joint session and asked Lee whether she had a senator's signature for her objection.

"Even even with the malfunction of 87 voting machines...," Lee continued before Biden gaveled her down again. Lee's mic was cut and boos rang out through the chamber.

"The objection is in writing and I do not care that it is not signed by a member of the Senate," Rep. Maxine Waters, D-Calif., said in the joint session.

"The chair will advise that the rules do care," Gore responded to laughter and applause.

The 2008 Electoral College certification for former President Barack Obama went off without a hitch, with no Republicans objecting to the Obama electors. The same was the case in 2012.

In 2008 specifically, Obama received a raucous standing ovation from both sides of the aisle.