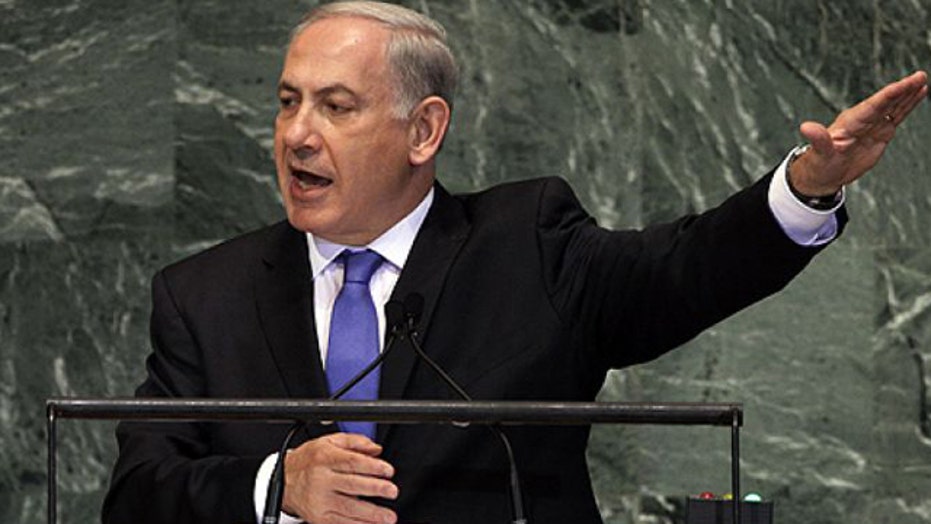 Tensions running high as Netanyahu to speak to Congress

The controversy over Israel Prime Minister Benjamin Netanyahu’s upcoming congressional address intensified Sunday with Democrats and Republicans accusing each other of injecting too much politics into the event.

Secretary of State John Kerry said Netanyahu was welcome to speak in the United States and that the administration did not want the event "turned into some great political football."

Kerry made his remarks in an interview with ABC’s “This Week” that was broadcast before he left for more talks in Switzerland toward a long-term, multi-nation deal to keep Iran from building a nuclear weapon.

Netanyahu is set to arrive in Washington late Sunday and will press his opposition to a diplomatic accommodation of Iran's program in a speech Tuesday to Congress.

The prime minister says he is making the address out of concern for Israel's security.

House Speaker John Boehner invited Netanyahu last month, without consulting the White House, to give a joint address to Congress.

The invitation was considered a diplomatic no-no and further exposed tensions between Israel and the United States.

Netanyahu’s acceptance further angered the White House and Democrats, who were forced to choose between showing support for Israel and backing the president.

Boehner, R-Ohio, told CBS’ “Face the Nation” that the White House has "attacked" him and Netanyahu over the issue.

“It has been, frankly, remarkable to me, the extent to which, over the last five or six weeks, the White House has attacked the prime minister, attacked me, for wanting to hear from one of our closest allies," Boehner said.

He defended his decision to extend the invitation, saying Netanyahu can talk about Iran’s nuclear threat better than anyone.

“And the United States Congress wants to hear from him,” he continued. “And so do the American people."

He also said the demand for seats in the House to hear the speech has been huge, despite some Democrats vowing to skip the event.

The White House has said it will not meet with Netanyahu while he is in a reelection effort with a March 17 vote.

Whether Vice President Biden will attend the event remains unclear.

However, California Sen. Dianne Feinstein, the top Democrat on the Senate Select Committee on Intelligence, told CBS that she plans to attend the event but won’t “jump up and down” like other members might.

She also took issue with Netanyahu saying he will be an emissary of the Jewish people, telling CNN’s “State of the Union” that he “doesn't speak for me on this."

Kerry’s remarks were a step back from Obama's national security adviser, Susan Rice, last week described the timing and partisan manner of Netanyahu's visit as "destructive" for the U.S.-Israeli relationship.

He also said that he talked to Netanyahu as recently as Saturday and argued that Israel is safer as a result of the short-term nuclear pact that world powers and Iran reached in late 2013.

Officials have described the U.S., Europe, Russia and China as considering a compromise that would see Iran's nuclear activities severely curtailed for at least a decade, with the restrictions and U.S. and Western economic penalties eased in the final years of a deal.

"Our hope is that diplomacy can work,” Kerry said. “And I believe, given our success of the interim agreement, we deserve the benefit of the doubt to find out whether or not we can get a similarly good agreement with respect to the future."

Meanwhile, the Republican-controlled Senate is pushing for a final say in the deal and wants to impose tougher sanctions on Iran should Tehran back out of a final agreement.

Graham also said six Democratic senators appear willing to side with Republicans on the issue.

Netanyahu also planned to speak Monday at the annual conference of the pro-Israel lobby AIPAC.

He considers unacceptable any deal that does not entirely end Iran's nuclear program. But Obama is willing to leave some nuclear activity intact, backed by safeguards that Iran is not trying to develop a weapon. Iran insists its program is solely for peaceful energy and medical research purposes.