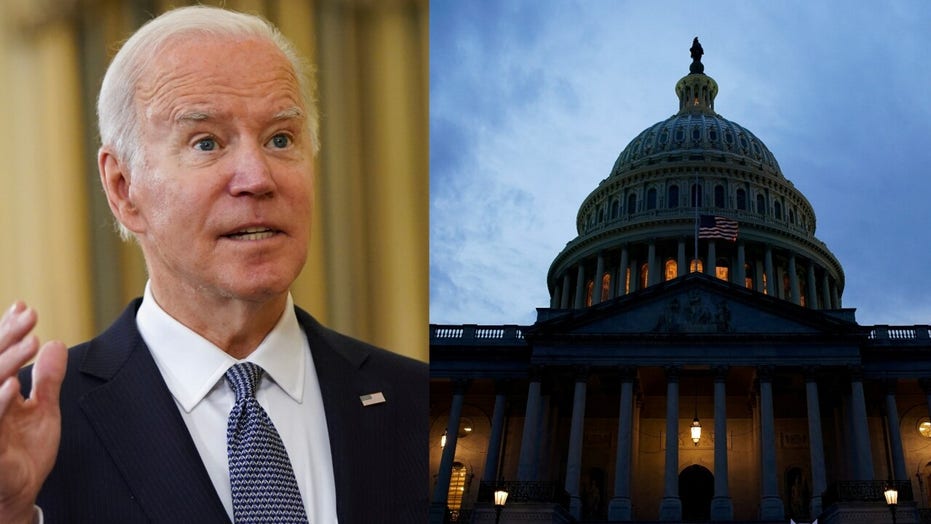 "We cannot normalize this rhetoric, this language, anti-Muslim hate, Islamophobia and racism," Rep. Jamaal Bowman said last week. "If leadership does not act accordingly, we are condoning that behavior."

Bowman, D-N.Y., made that comment at a press conference demanding House Democratic leaders call a vote on a resolution removing Rep. Lauren Boebert, R-Colo., from her committee assignments.

House Speaker Nancy Pelosi, D-Calif., and other party leaders hemmed and hawed all week about whether they would back such a move. They ended the week without taking action.

"We're not going to go for their anti-vaxxing," Pelosi said when asked if House Democrats could pass a bill to prevent a government shutdown with a GOP-backed provision defunding President Biden's vaccine mandates attached.

But just a few days later, two Senate Democrats, Jon Tester of Montana and Joe Manchin of West Virginia, supported a resolution that would invalidate Biden's vaccine mandate for businesses.

Those two intra-party disagreements in the last week and a half are the latest examples of internal dissent that's plagued Democrats all year on issues large and small. Democrats' biggest agenda items – their massive reconciliation spending bill and the infrastructure bill – are where these divisions are exposed the most.

When the Senate passed the infrastructure bill with an overwhelming bipartisan vote this summer, many thought it would have a relatively simple path to passage in the House. But progressives demanded that the bill be held up until the Senate passed a social spending reconciliation bill up to their standards. Moderates countered that the infrastructure bill should be swiftly ushered to President Biden's desk.

That led to months of tense negotiations and animosity between the sides. Progressives said they didn't trust the moderates to act in good faith once the infrastructure bill was law.

"It's the effing progressives," a moderate Democrat suggested  to Fox News during one of the most tense times during negotiations late in October. The moderate accused the progressives of asking for "unreasonable things."

Eventually, the infrastructure bill passed, but not before it lost almost all of its GOP support in the House as Republicans were content to sit back and watch the Democrats fight amongst themselves. The reconciliation bill passed the House too. But it's still held up in the Senate. It's unclear there will be a deal before 2022, when Majority Leader Chuck Schumer, D-N.Y., hopes to have one.

"Now it's time for Joe Manchin and Kyrsten Sinema to close the deal, for goodness sakes," Senate Majority Whip Dick Durbin, D-Ill., said this month of the two most moderate Democrats in the chamber. "Enough is enough."

Asked last month why it seems Democrats can't get out of their own way, Pelosi praised her party as a big tent.

"This is the Democratic Party," she said. "And it is a party with vitality and diversity. It's something that we all respect and admire. We're not a lockstep party. We are not just speaking as one person, and nobody else needs to show up. And that exuberance is the vitality … which we value and treasure and respect the different opinions within our party."

Republicans, of course, have more than their fair share of internal problems. Rep. Dan Crenshaw, R-Texas, made sharply critical comments about the GOP Freedom Caucus last week. Former President Donald Trump and his allies are pushing primary challenges against what he views as insufficiently loyal GOP members of Congress, governors and even secretaries of state.

And Senate Republicans, usually one of the most united groups in politics, were divided last week by a debt limit deal Minority Leader Mitch McConnell, R-Ky., made that upset even allies like Sens. Mitt Romney, R-Utah, and Kevin Cramer, R-N.D.

But Republicans are out of power with few campaign promises to fulfill other than to oppose Biden and Democrats until they have a chance to take majorities in Congress next year. Democrats are faced with a deteriorating political environment, razor-thin majorities, and weak polling numbers for their signature reconciliation bill that many are expected to run on in 2022.

According to the Cook Political Report, Democrats are defending 12 House seats that are either a "toss-up," "lean Democratic," or "lean Republican." Republicans are defending just four such seats.

And in the Senate, where Republicans are faced with what should be an unfavorable map defending their 2016 Senate wins, both parties are now defending the same number of "toss-up" seats, according to the Cook Political Report. That may foreshadow a tough election night 2022 for Democrats after a tumultuous first year in power under Biden.