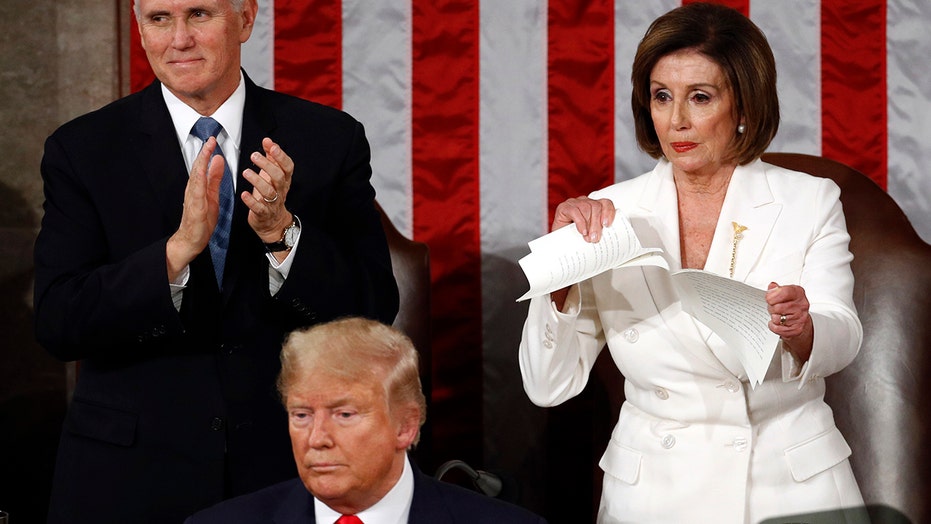 Democrats are calling on Twitter and Facebook to take down an edited video of House Speaker Nancy Pelosi, D-Calif., ripping up the State of the Union address -- claiming it's designed to “mislead” people.

“The latest fake video of Speaker Pelosi is deliberately designed to mislead and lie to the American people, and every day that these platforms refuse to take it down is another reminder that they care more about their shareholders’ interests than the public’s interests,” Drew Hammill, Pelosi's deputy chief of staff, said Friday.

“This video is clearly another deceptive effort by @realDonaldTrump to mislead and manipulate the American people,” said Rep. Veronica Escobar, D-Texas

On Thursday, Trump posted the video, made by Turning Points USA, which shows the “powerful American stories” that Trump highlighted in his State of the Union address interspersed with the moment immediately afterward when Pelosi tore up the speech.

But Democrats objected to the video because it implies that Pelosi ripped up the papers after each story was told -- which she did not.

The video was also posted to Facebook. Hammill was quizzed by Facebook spokesman Andy Stone about what he found objectionable to the video: “Sorry, are you suggesting the President didn’t make those remarks and the Speaker didn’t rip the speech?”

“What planet are you living on?” Hammill responded. “This is deceptively altered. Take it down.”

Along with Escobar, other lawmakers rushed to condemn the video and social media platforms for not removing the video. 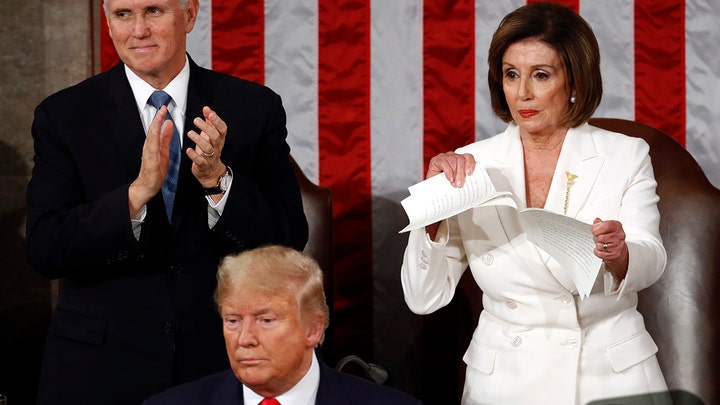 “This video is doctored. It has been up, and pinned to the President's page, for nearly a day. Trump posted it to deceive Americans about @SpeakerPelosi's actions and record,” Rep. Don Beyer, D-Va., said. “If I posted a doctored video it would be a clear violation House Rules. Twitter should take this down.”

Republicans, meanwhile, pushed back against the efforts by Democrats to censor the video.

“They’re arguing it’s deceptively edited to misinform and want twitter to censor it,”  National Republican Senatorial Committee senior adviser Matt Whitlock tweeted. “But.. she tore the speech that had those stories. Repetition to highlight exactly what she was tearing is not 'misinformation,' these Reps are gaslighting.”

The video is the latest controversy in the fallout over the State of the Union. The House on Thursday voted to table a Republican-led resolution to condemn Pelosi.

The vote, which fell along party lines, 224 to 193, effectively killed the measure introduced on Wednesday by Rep. Kay Granger, R-Texas, amid widespread GOP furor over Pelosi’s actions. The resolution called the speaker's public shredding of the address “a breach of decorum” and said it brought “discredit on the House.”