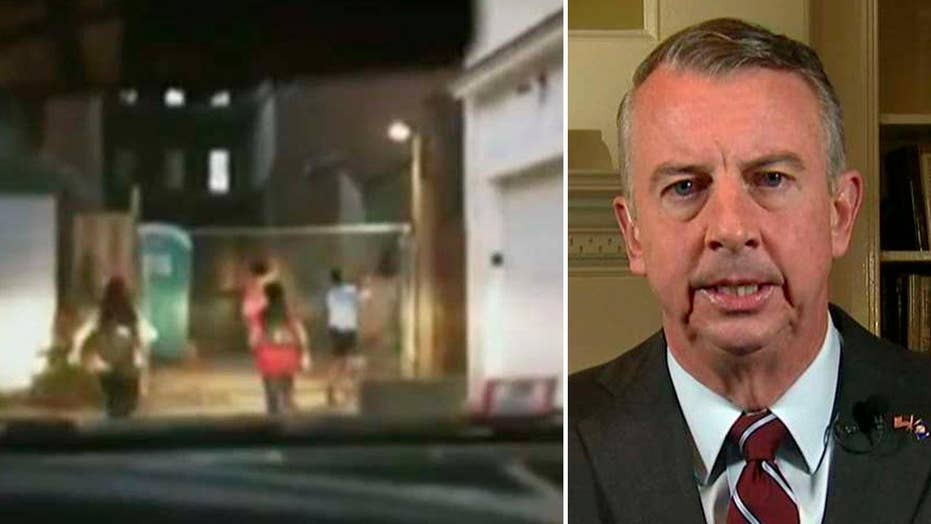 On 'Fox & Friends,' the Virginia Republican gubernatorial candidate reacts to a Democratic ad implying his supporters are Confederates who attack minority kids.

The minute-long advertisement, titled “American Nightmare,” was released by Democratic group Latino Victory Fund (LVF). It shows minority children seemingly being chased by a driver in a pickup truck, decked out with a Confederate flag, a “Gillespie for governor” bumper sticker and a "Don't tread on me" license plate.

The driver makes his way toward the scared children — who shout, “Run! Run! Run!” when they see the truck.

The ad concludes with a narrator asking: “Is this what Donald Trump and Ed Gillespie mean by the ‘American Dream?’”

VIRGINIA GOVERNOR RACE: WHO ARE ED GILLESPIE AND RALPH NORTHAM?

“American Nightmare” is airing through Election Day on Nov. 7 in Richmond and Washington markets on Spanish stations, according to The Washington Post.

LVF took to Twitter throughout the day Monday to allege: “The Gillespie campaign has consistently promoted a false narrative painting Latinos as criminals and gang members.”

Ed Gillespie's campaign manager called the ad by the Latino Victory Fund, a group that supports Ralph Northam, "an all out attack on the people of Virginia." (AP Photo)

“Ed Gillespie has made it very clear what he thinks of Latinos, and on Election Day, our community will make it clear how we feel about him,” another tweet read.

In a statement to Fox News, campaign manager Chris Leavitt called the ad part of "a desperate smear campaign" and "an all out attack on the people of Virginia."

"Ed Gillespie has focused his campaign on the many policy differences between Ralph Northam and him, but sadly the Northam campaign and its allies have launched a desperate smear campaign against Ed in the closing days of this election," the statement read.

"The Lieutenant Governor was roundly rebuked for exploiting imagery from the tragedy of Charlottesville for political points. Now his allies have reached a new low with a disgusting, vile television ad seeking to instill fear in our children with that same imagery," the statement continued. "This is not an attack on Ed Gillespie anymore. This is an all out attack on the people of Virginia. This latest ad gives a clear indication of just what Ralph Northam and his national Democratic allies think of all of us, and it’s sickening."

Northam's campaign has defended the ad. Campaign spokeswoman Ofirah Yheskel said in a statement that, "It's not shocking that communities of color are scared of what his Trump-like policy positions mean for them."

Trump has eagerly tweeted support for Gillespie by alleging that Northam “is fighting for the violent MS-13 killer gangs & sanctuary cities” — a narrative Gillespie has pushed through local advertisements.

Northam’s campaign has tried to link Gillespie with the white supremacists who rallied in Charlottesville, Va., in August. Northam slammed the Republican candidate for not denouncing Trump “for not calling these white supremacists out for who they are.”