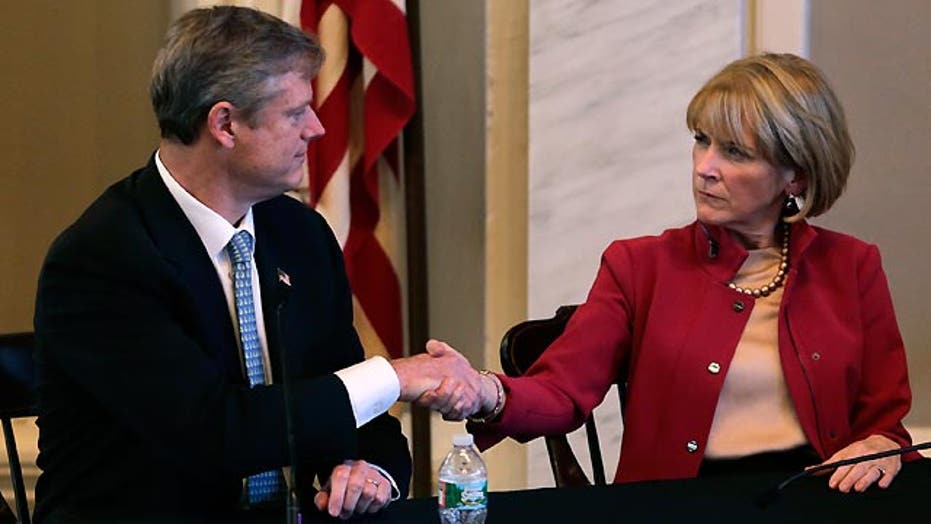 Election shaping up to be closer than expected

BOSTON – Massachusetts gubernatorial candidate Martha Coakley is a veteran of state politics, but perhaps is best known nationally as the Democrat who lost the late Sen. Ted Kennedy's seat to Republican Scott Brown in the 2010 special election.

This year, the race for governor is Coakley's chance for political redemption. But even in the predominantly Democratic Bay State, she's struggling once again.

The latest poll numbers show the Commonwealth's first female attorney general, who had maintained a healthy lead in the race over the summer, now in a dead heat with Republican Charlie Baker. Plus, Coakley is trailing considerably in fundraising.

The tight race has Democrats working to avoid a repeat of the 2010 upset, scrambling to rally the base -- and it drew first lady Michelle Obama to the state last Friday, where she urged a grassroots effort to make calls and knock on doors.

"We have an opportunity to build an economy that works for everybody," Coakley said at the rally, sounding a populist tone. "Not just people at the top, not just Wall Street."

Baker, who also was the GOP nominee for governor in 2010 and lost to Democratic Gov. Deval Patrick, is a businessman who served in the cabinets of two prior governors and spent 10 years as the head of Harvard Pilgrim Health Care.

Baker says he feels great about where the race stands in these waning weeks.

"We have a little over a month to go and we've closed a 15-point gap over the course of the past four or five months," Baker said. "We're focusing on our plans to bring back balance and fiscal discipline to Beacon Hill, create jobs and build a great Massachusetts and we've been thrilled with the reaction we've gotten from voters across the political spectrum."

Coakley's staff declined a request from Fox News for an interview.

Perhaps the most stunning aspect of the race is the wide money gap. Baker's team has more than $1.5 million cash on hand, compared with the Coakley camp's $266,000.

"The congressional delegation is certainly stepping up and giving a lot more money to help her out," said Democratic strategist Mary Anne Marsh. "Her fundraising hasn't picked up. But at this point, she's really going to have to rely on outside groups to come in and help her and hope they're going to run the right kind of ads that are going to go against Charlie Baker and help her out in the end."

Republican strategist Charley Manning said the fundraising success leaves Baker in a much stronger place during the final stretch.

"This gives Charlie Baker a great opportunity to get his message out, what his plan is for the state over the next four years -- and Martha won't be able to respond," Manning said.

Though Massachusetts is perceived as a true blue state, it has a history of electing Republicans as top executive. Prior to the current Democratic governor's two terms, voters in the Bay State chose Republicans to occupy the executive office on Beacon Hill for 16 years, including former presidential candidate Mitt Romney.