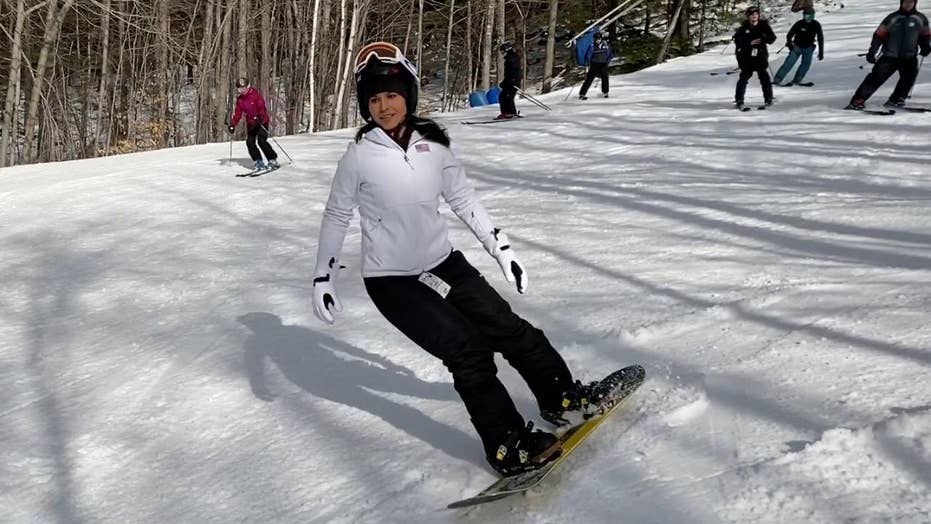 NORTH CONWAY, N.H. – She may be from Hawaii, but Democratic presidential candidate Tulsi Gabbard is more than comfortable on the slopes.

The four-term congresswoman and Iraq War veteran strapped on her snowboard and shredded it up with supporters on Tuesday at Cranmore Mountain Resort in New Hampshire’s White Mountains.

Gabbard took to the slopes with just two weeks to go until New Hampshire holds the country's first primary in the White House race. The long-shot for the Democratic presidential nomination -- who is spending the vast majority of her time campaigning in New Hampshire -- was joined by a couple of dozen supporters who entered a contest to ski or snowboard alongside the White House hopeful.

“I’ve been wanting to go snowboarding all winter and so try to find the time to do it -- we’ve been campaigning every day and so we just brainstormed with the team and said why don’t we go snowboarding,” she told Fox News in an interview at the ski resort.

Gabbard took the opportunity to chat with some undecided voters who happened to be spending the day skiing and snowboarding at Cranmore.

“We just heard from people that this is a much better way, that they appreciate being able to meet a presidential candidate out and having some fun and going where people are hanging out rather than just the usual traditional political haunts," she said. "I’m grateful. I had some fun in the process, too.”

The candidate took a few warm-up runs with campaign aides before joining supporters and reporters who covered the campaign event. Gabbard told Fox News it was her first time snowboarding in two years.

“I’m glad that I was able to find my footing here. It’s been a couple of years since I went snowboarding,” she told Fox News’ Rob Dirienzo.

Gabbard appears to be the first presidential candidate to hit the slopes since former New Mexico Gov. Gary Johnson went skiing a couple of election cycles ago.

Former South Bend, Ind. Mayor Pete Buttigieg says his presidential campaign is working “to empower staffers at all levels to be able to speak to their experiences to raise concerns.”

The Democratic presidential candidate’s comments on Tuesday came hours after a New York Times report that Buttigieg’s campaign sent a questionnaire to staffers of color earlier this month asking about microaggressions in the workplace.

The first question asked on the survey – which was sent out on Jan 1. by the campaign’s national engagement coordinator – asked whether they had experienced any of six microaggressions listed, including being interrupted or being mistaken for another staffer of color, according to the report.

Speaking to reporters in Ottumwa, Iowa, Buttigieg told reporters including Fox News’ Andres del Aguila that “we’ve got to work much harder to do a better job.

And the campaign posted a Medium article which highlighted that it’s committed to building a diverse staff.

Buttigieg’s struggled to overcome what critics say is a lack of diversity in his campaign. And his inability to date to build support among black voters has been well chronicled in the media. The candidate’s also faced scrutiny for his handling as mayor of the fatal police shooting last year of a black man.

It was one of the biggest cases of Democratic presidential candidate Sen. Amy Klobuchar’s tenure as the top prosecutor in Minnesota’s largest county.

And Klobuchar – in her Senate elections and during her current White House bid – has often recounted the killing by stray bullet of an 11-year old girl who doing homework at her dining room table. Klobuchar’s office put Tyesha Edwards’ killer – who was a black teenager – in jail for life.

But a new Associated Press investigation into the 17-year old case – which was unveiled on Tuesday -- uncovered new evidence and raises questions about whether the shooter, Myron Burrell, is innocent.

A Klobuchar campaign spokesperson told the AP that Burrell was tried and convicted of Tyesha’s murder twice, and the second trial occurred when Klobuchar was no longer the Hennepin County Attorney. If there was new evidence, the spokesperson said it should be immediately reviewed by the court.

Biden’s closing argument to voters in Iowa: 'Imagine all the progress we can make'

Former Vice President Joe Biden on Tuesday went up with his final TV commercial in Iowa ahead of next Monday’s caucuses, which kick off the presidential primary and caucus calendar.

The ad urges voters to imagine what a Biden administration could accomplish if President Trump is defeated in November’s general election.

“Imagine all the progress we can make in the next four years,” Biden says as he narrates the spot, before listing affordable health care, fighting climate change and banning assault weapons.

“What we imagine today, you can make a reality. But first we need to beat Donald Trump,” Biden emphasizes.

The commercials scheduled to run in five TV markets in Iowa as well as on Hulu through next Monday’s caucuses.

Biden ahead nationally, but Sanders nipping at heels

Biden retains the edge in the latest national poll in the battle for the Democratic presidential nomination.

Biden stands at 26 percent support among Democratic voters and independent voters who lean Democratic, according to a Quinnipiac University survey released on Tuesday.

"After months of leading national polls, Joe Biden's support is holding steady - but he no longer sits comfortably at the top of the Democratic presidential pack. Bernie Sanders' support breaks into the '20s for the first time,” Quinnipiac Poll analyst Mary Snow highlighted.

The survey indicates that 55 percent of Democrats and independents who lean Democratic say they might change their mind about their vote, with 43 percent saying their mind is made up.