Sen. Bernie Sanders vowed on Wednesday to stay in the Democratic presidential nomination race, emphasizing that "on Sunday I very much look forward to the debate in Arizona with my friend Joe Biden."

The populist senator from Vermont – who spoke the day after he was pummeled by the former vice president in Michigan, Missouri, Mississippi and Idaho and fell further behind Biden in the crucial race for Democratic convention delegates -- then pledged to press the former vice president and nomination front-runner at this weekend’s primetime showdown with a series of progressive policy questions.

But if you read between the lines of Sanders short 10-minute address, it seemed like he was setting the terms for his likely upcoming exit from the race by laying down markers for Biden to accept – such as embracing the self-described democratic socialist's progressive agenda and a commitment to the younger voters who’ve fueled both of Sanders presidential campaigns.

“Bernie Sanders is clearly laying down a marker for Joe Biden that he is going to press him on to provide answers,” veteran Democratic strategist Zac Petkanas noted.

Petkanas, who served as the Hillary Clinton campaign’s director of rapid response in the 2016 race, emphasized, “The question that is still up in the air is whether Sanders is proving a road map for Biden or is he going to use those issues as a hammer to weaken Biden. I think we’re going to get an answer to that at the debate on Sunday.”

Sanders -- whose chances of winning the nomination are quickly evaporating -- acknowledged he’s losing the electability argument to Biden but declared that he’s won the “ideological debate.” And he touted the appeal of his progressive message and took aim at the former vice president for not resonating with younger voters.

Then the senator – in what appeared to be a progressive litmus test -- shared some of the questions he plans confront his rival with on the stage.

Petkanas – who’s unaffiliated in the 2020 Democratic primaries but admits he leans toward Biden -- said that if Sanders “uses those questions that he’s raised to promote progressive ideas and hang a lantern on the urgency of issues like climate change and income inequality and health care, that’s a really positive way for Sanders to use the last remaining days of his candidacy.”

The next round of showdowns

The upcoming primary calendar appears to only make matters worse for Sanders as his window for nomination continues to shut.

The large states of Florida, Illinois, Ohio and Arizona all hold primaries next Tuesday, followed a week later by Georgia. Sanders lost all five of these states in the 2016 Democratic race to eventual nominee Clinton.

The latest public opinion polls in Florida and Arizona -- conducted after Super Tuesday but before this week’s impressive wins by Biden -- indicated the former vice president holding large double digit leads over Sanders.

At last count, Sanders had slipped roughly 150 delegates behind Biden, and it’s extremely challenging for the senator to make up such ground in the upcoming contests.

On deck for Sanders and Biden

Sanders traveled to New York City later on Wednesday for an appearance on "The Tonight Show Starring Jimmy Fallon."

Biden was scheduled to give an address on Thursday in his hometown of Wilmington, Delaware, on the coronavirus outbreak, which on Wednesday was declared a global pandemic by the World Health Organization.

Biden's campaign announced on Wednesday that events scheduled in Illinois and Florida for Friday and Monday were canceled after requests from offiicials in those two states. The campaign said that virtual events would instead be held.

The Bloomberg campaign confirmed to Fox News Wednesday that of the more than $500 million spent on ads during the campaign, more than $275 million went directly toward ads aimed at the Republican president.

The multibillionaire business and media mogul declared his candidacy in late November. He ended his White House bid last week, after a dismal showing in the 14 states from coast to coast that held Democratic presidential nomination contests on Super Tuesday. Bloomberg immediately backed Biden’s campaign. 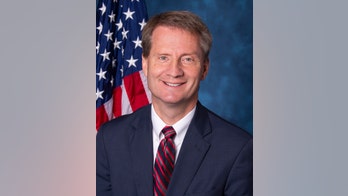